It would have been understandable for Peter Handscomb to have mixed emotions when overlooked for this month's Test series against Sri Lanka, for there is an argument his spot was taken by fellow Victorian Will Pucovski.

Handscomb hoped he had done enough in the final Test against India in Sydney when he made a composed 37 before playing on to a delivery from match-winner Jasprit Bumrah. However, the Victorian skipper became part of a four-man casualty list after Australia's first series loss at home to India. 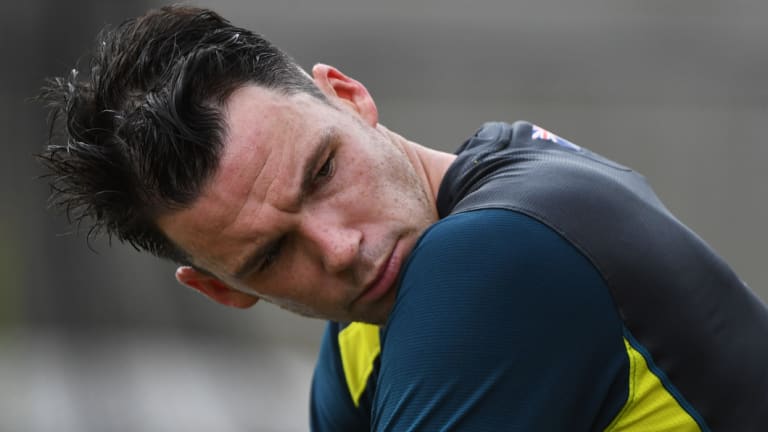 Peter Handscomb at training on Thursday ahead of the third ODI.Credit:AAP

"I really do hope he does so well and he sticks to his guns, sticks to his game plan because he is smart out there and he reads bowlers and I hope he just goes about it the way he does. I, obviously, got to watch him against the WACA in Perth make 240 – it as one of the impressive knocks I have seen."

While the uncapped Pucovski experiences the raw excitement of a Test call-up, Handscomb, in some ways, remains in limbo.

His Test career, with 16 caps to his name, is on hold again. He was dropped after the opening two Tests against India, with an intense media and public focus on his unorthodox style of batting deep in his crease after 68 runs through four innings. Overlooked for the second straight year for the Boxing Day Test, he met with selection chairman Trevor Hohns but the need for a bowling all-rounder in Mitch Marsh ultimately prevailed.

"I had a very good chat with Trevor Hohns which was good and, obviously, pressed my case and tried to get some clarity around it. But it was the right decision in the end because we saw how flat that wicket was and how tough it was for the bowlers. They needed that extra bowler and that's perfectly fine. That's cricket," Handscomb said.

I had hoped so [to be picked] but 30s aren't going to keep you in a lot of sides.

He tinkered with his technique, regained his groove by crunching 70 off 35 as an opener with the Melbourne Stars, and returned at No.6 in the order for the final Test in Sydney. But then came another jab in the ribs before the Sri Lanka series.

"I had hoped so [to be picked] but 30s aren't going to keep you in a lot of sides. But considering we only batted once, I felt pretty good and looked all right and I thought it would have been nice to have a crack against Sri Lanka up at the Gabba and Manuka [Oval]. But that is the selectors' decision and you have got to accept it and move on," he said.

He returned to the one-day international squad for the first time in 16 months for the three-match series against India, which culminates in a series-deciding clash at the MCG on Friday. He made an immediate impression in Sydney, top scoring with 73 off 61 balls with six boundaries and two sixes in a 34-run win. He left runs in the middle when he was stumped down the leg side in Adelaide when on 20 off only 22 balls.

Refreshed on Thursday after a night on his rural property in Kinglake, Handscomb said too much had been made of his homespun technique.

"I am always tinkering with it, little things … but you are not making drastic changes because the last four or five years, I have been teaching my body to move this way. I can't all of a sudden start tapping my bat on the ground because I lose all my cues and all my movements," he said.

"It's about little changes – couple of things with my feet, maybe my alignment, making sure my shoulders and elbow are driving my movement."

In a year when the sport's two big-ticket items loom, a World Cup from late May  and the ensuing Ashes tour, Handscomb – who gets married in April – knows runs of any currency are vital. He remains in the frame for both tours, with Steve Smith's recovery from elbow surgery a potential factor in his selection.

"I am feeling pretty good. I have been saying that all summer but all my movements feel good and my plans feel clear, it's just getting a lot of starts and not really getting that big score under my belt. But it feels like it is around the corner which is nice but, at the moment, I am just happy doing my role for the team," he said.

"It's a bit of a fickle game, cricket. You can't worry about it too much. A couple of dismissals, poor shots or a good ball and then a chop on – it could all be very different. But that's the game."