Dan Hannebery's hamstring isn't torn, but it isn't right yet either.

He can still run but when he does he is in some discomfort –  one leg is tighter than the other and causes him some grief. It is what has become known as hamstring "awareness". 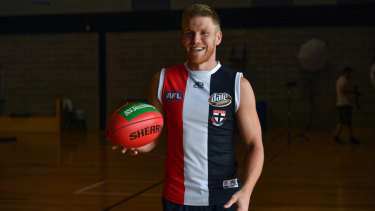 Dan Hannebery is aiming for round one, but won’t be fussed if his return is later.Credit:Joe Armao

The Saints recruit, who moved as a free agent from the Swans over the summer, is confident he will be ready for round one, but also doesn't want to be pinned to a specific date.

If he is ready for round two then so be it.

“That is the plan [to play round one]," he said on Thursday at Moorabbin where he was confirmed as part of the Saints' five-man leadership group.

"Having said that though, it is not about short cutting sessions to be right for round one, there are 22 rounds a year and I think in previous years people got pretty caught up in round one and making sure they rush to get right; I am pretty confident I will be right but I won’t be missing sessions and if that means I come up short [then] I come up short."

The situation was more of a frustration than anything.

“It's not too bad, bit of awareness there through Christmas time; I have done a pretty solid block of running now and just trying to build the Ks up rather than rushing it at this time of year – it’s a long year," he said.

"In the past at different stages I would have rushed things but the club has taken the approach of being really cautious and making sure I get a certain amount of conditioning in and leg weights and I think it is the right call, especially with round one still five or six weeks away.

"I had a good solid block at the start of pre-season before Christmas so I am confident I have a fair bit of run in my legs so it is just about managing it now until round one.

“It's just a bit of tightness there and discomfort compared to the other leg. It needs a bit more run and more conditioning in the leg and leg weights and hopefully we will be right."

Hannebery admit he was slightly taken aback to be voted into the leadership group at his new club.

"I just wanted to come here and try to do my best to train hard and set an example in that regard so it is something I am pretty humbled by and excited about to lead the group," he said.