Sacrifices do pay off. Just ask Chris Ikonomidis, who is now reaping the rewards from what he says is the best decision he's ever made.

Ikonomidis was celebrating his 16th birthday when he received an offer to join the youth system at Serie A club Atalanta. At an age when most young men are learning how to party, Ikonomidis decided to move his life to the other side of the world to learn how to play soccer the Italian way – leaving his family, friends and all the comforts of home behind. 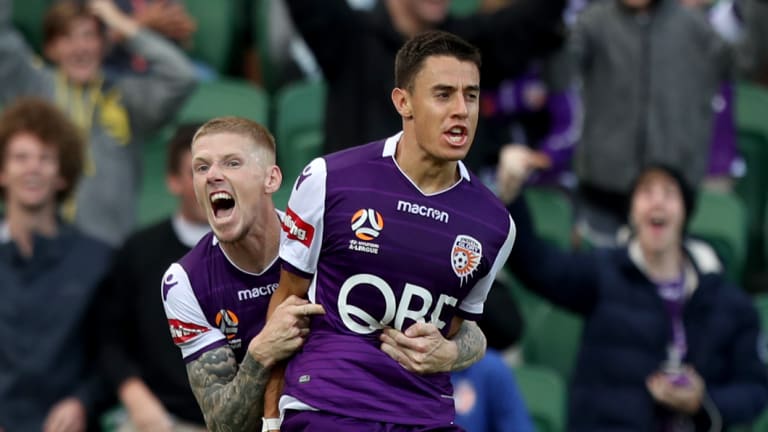 Chris Ikonomidis (right) is enjoying his stint at Perth.Credit:AAP

It was no picnic. Ikonomidis shifted to Lazio after 18 months in Italy but never broke through to make a first-team appearance at the club.

He was sent out on loan three times, with his first temporary stint at Salernitana exposing him to the brutally harsh nature of the Italian game when he and his teammates were locked inside the Serie B club’s training base for an entire week as punishment for a 3-0 loss. Even worse, his parents were visiting at the time and weren’t allowed inside to see him.

Now 23, Ikonomidis' debut goal for the Socceroos has confirmed what he already knew: it was all totally worth it.

"It had probably the biggest influence on my career, my time in Italy," he said.

"All my youth development over there, everything I learned was the Italian style – whether it was technically, tactically or mentally. I feel like I grew a lot going over there and it was probably the best decision I've ever made in my life.

"The main thing that it gave me, apart from my skills, was the mental strength. I moved over by myself and had to sacrifice a lot to follow my dream of becoming a professional. The stuff I went through in Italy is definitely helping me today. It keeps me more calm and a little bit more centralised in all my thoughts."

Ikonomidis' performance in Australia's 5-0 friendly rout of Oman has given coach Graham Arnold some serious food for thought ahead of the Asian Cup.

On form, he simply has to play in Sunday's opener against Jordan, be it from the start or off the bench. The former Sutherland Sharks junior has been one of the A-League's best players across the opening third of the season with six goals and two assists in nine appearances for Perth Glory. 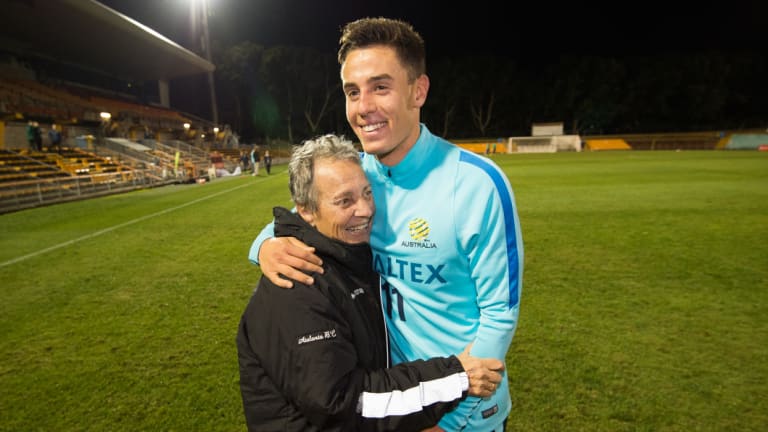 Ikonomidis with his grandmother Evangelia after a Socceroos training session in 2016.Credit:Wolter Peeters

Ikonomidis puts his recent success down to two things – not being on loan anymore, and Tony Popovic. "When you're loaned out to places, especially without even a buyout clause, the club doesn't have much incentive to give you a go and to put much faith into you," he said.

"Playing at a club now that owns me, it's much better. There's a project behind it and there's people in the club that believe in me and know what I'm capable of. It's a breath of fresh air for me.

Ikonomidis said it was "special" to get off the mark for Australia, waking up in Dubai the next morning with hundreds of congratulatory messages on his phone from family, friends and teammates. But he's confident it's just the start for him.

"With this system, with this coach, he gives us players a lot of freedom – especially the attacking players – to express ourselves and do what we feel comes natural to us. I think that really suits my game well and it can get the best out of me," he said.