Harden up: Rockets science behind a stellar rise

After another jaw-dropping performance, James Harden was sitting shirtless at his locker stall, checking texts. It was mid-April, and he had just scored 44 points in the Houston Rockets' play-off opener, a slower game for the NBA's fastest, boldest team, and Harden had been frustrating for Minnesota and impossible to stop and – how to best put this? – most valuable for the Rockets. 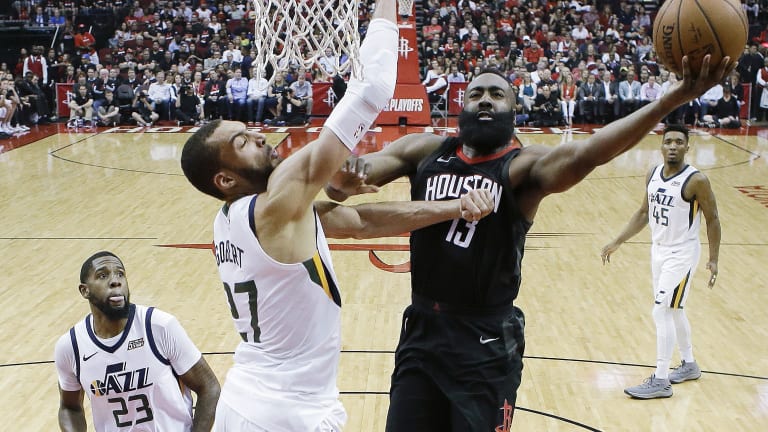 "What did he want? A free throw, a three-pointer, a lay-up?" Timberwolves guard Jimmy Butler said afterward. "He got whatever he wanted."

Harden looked contented afterward as he scrolled his phone, and somewhere buried among the other messages was a text from Scott Pera, who coached Harden in high school and as an assistant coach at Arizona State.

"Good luck," it read, and considering Pera said he has texted Harden before every game over his nine NBA seasons, he gave up on creativity long ago.

Pera, now head coach at Rice University a few miles from Toyota Centre in Houston, has watched Harden go from good to great to MVP front-runner. He has paid close attention to the 28-year-old guard's intelligent play and ability to find loopholes in league rules, and it makes Pera chuckle when he thinks about how all this started a dozen or so years ago outside Los Angeles.

Harden was a sophomore then at Artesia High, and talented as the young shooter was, his voice wasn't the only thing that seemed soft. So one day after practice, Pera picked up a pad and smacked Harden with it, knocking him to the floor.

Harden looked at his coach, a mix of confusion and anger, and got up and faced the pad again."You have to know how to be a great scorer, not just a great shooter," Pera said he told the player then, and the lesson was that a complete player will learn to exploit defenders' aggression, draw a foul and sink two easy shots.

It made sense to Harden, already revealing himself as a thoughtful player quick to retain information, so Pera drilled him again and the anger turned to applied logic and a desire for opportunity.

"He just wanted more – give me more, show me more," the coach said. "A lot of days of just banging into him to make him understand he could take the hit and … then his creativity and his mind just took over." 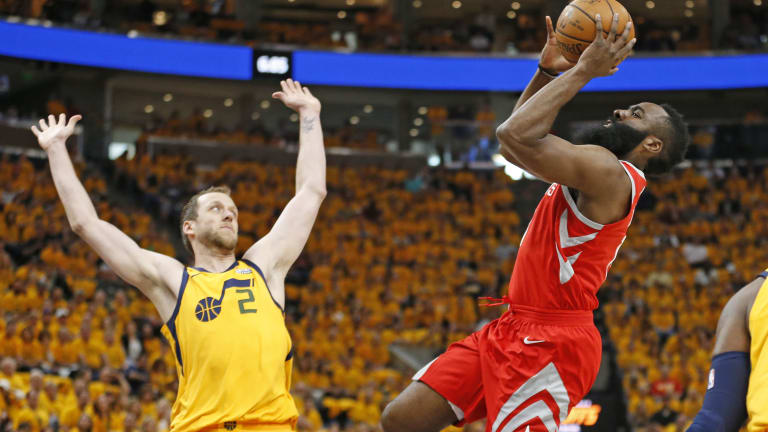 That's the most effective thing about Harden. He's 195 centimetres and at almost 100 kilograms not known as much for his physical dominance as fellow MVP candidate LeBron James, and yet he has combined his physical gifts with those of his mind to become one of the world's most dominant basketball players. How else to explain this season, combining a new league rule ostensibly meant to limit Harden along with Houston's addition of nine-time All-Star Chris Paul, and somehow the Rockets' best player has been more lethal than he was before?

Years after Pera introduced Harden to his pad, Harden would become so skilled at drawing fouls, so very blatant at it, that the NBA ruled last year that ball-handlers couldn't initiate contact and also be the victim of a shooting foul. The "James Harden Rule", as it's known, has wound up being a heftier challenge for game officials to enforce than the player it's named after. Harden nonetheless led the NBA in free throws and attempts during the regular season, sinking 129 more than second-place Anthony Davis, but he adapted anyway, disappearing into a gym last year.

With an already devastating step-back mid-range shot, Harden decided to expand his weapon to long range. Harden made 36.7 per cent of the 722 three-pointers he attempted, and for the first time since 2012, a player besides Golden State's Stephen Curry led the league in made threes (Curry did miss 31 regular season games). Against Minnesota last month, the step-back – which may or may not be another grey area in the rules, considering Harden's stutter-step action before the shot – was what it has been all season: nearly impossible to defend.

"If you have that aggressive mindset, good things will happen," Harden said after that game. "If they gave me space enough where I can get my shot off, I shot it. If they weren't pressuring me enough to where I could get by them, then make a play for somebody or myself, and I did that. Whether it's tonight, whether it's 82 regular season games, I'm going to do the same thing."

It was just another weakness Harden identified in himself, defenders and indeed the league, and the Rockets have been the favourites to reach the NBA finals because of his ability to exploit those things.

"He's able to see things and able to understand, and he processes them very quickly and in real time," said Herb Sendek, who coached Arizona State during Harden's two seasons in Tempe.

"Some guys have to hit pause and rewind and have an explanation, but it's a whole other thing to make those snap decisions."

So many years after Pera challenged Harden that first time, opening a wormhole of ways to exploit a game and its supposed limitations, he now watches his former player from across town. He has seen a player who keeps on reinventing himself and in an unusual way might need to again, considering he is eight wins from an NBA championship and a seemingly cursory vote to crown him as MVP, indeed basketball's mountaintop.