Star Carlton forward Tayla Harris has copped a one-match ban for her hit on GWS' Pepa Randall in the Blues' 29-point win on Saturday, while Melbourne's Tegan Cunningham has been suspended for two matches.

In other match review sanctions from the weekend's action, Fremantle's Hayley Miller and Adelaide's Chloe Scheer were both handed one-match bans. 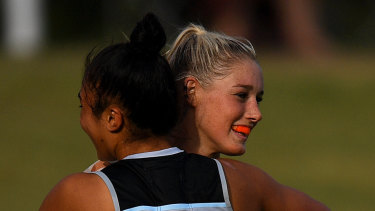 Tayla Harris has been banned for one match.Credit:AAP

Harris dominated the contest in Blacktown and kicked three goals in the Blues' record score of 10.5 (65) but collected Randall in the fourth quarter, an incident she had conceded "probably looks bad".

She was charged with rough conduct, with the incident assessed as "careless … with medium impact to the head" and will miss the Blues' trip to Geelong this Saturday.

"I know Pepa so I'm not going to … clearly (it was) not intentional. I just hope she's OK," Harris told Seven after the game. "Being a tall person, these things happen."

Cunningham's two-match ban comes courtesy of a strikingcharge against Brisbane's Shannon Campbell. The Demon was also reprimanded for rough conduct against the same player.

Harris' teammate Nicola Stevens was charged with striking Elle Bennetts during the first quarter but can accept a reprimand. Western Bulldog Hannah Scott was also reprimanded for rough conduct against North's Chloe Haines.