Trent Barrett remains at Manly but it is unclear about what role he will take on after Des Hasler’s appointment as head coach, with the Sea Eagles continuing to refuse a payout.

The naming of Hasler as Manly’s mentor for the next three seasons leaves the club in the extraordinary position of technically having two head coaches on their books. 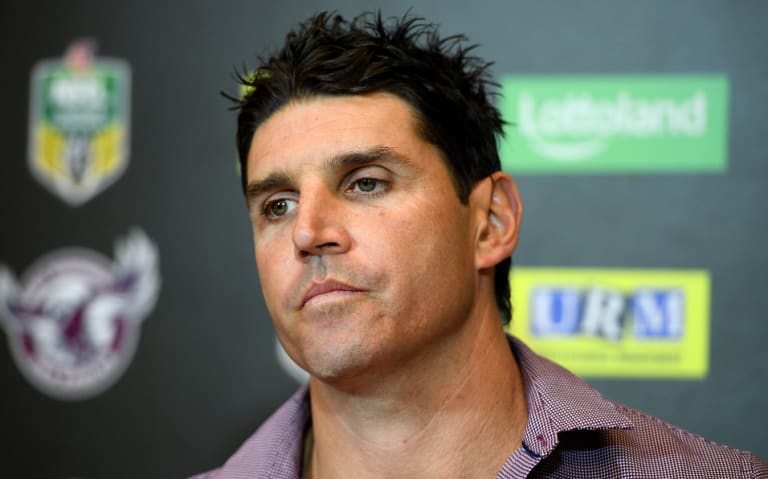 Hardball: Manly has no intention of paying out Trent Barrett.Credit:AAP

Barrett resigned and gave 12 months’ notice in July, later slamming the state of the facilities at the club’s North Narrabeen base.

It had been anticipated that a settlement of some kind would be arranged to coincide with Hasler’s arrival but as of Monday Manly were sticking to their guns and insisting that Barrett work out a notice period that ends next July.

Exactly what job he will have with Hasler now in control at the Sea Eagles remained unclear, with the new coach and the club hierarchy saying little due to the ongoing dispute with Barrett.

Asked whether he would be happy to work with Barrett until his contract expired, Hasler said: “I haven’t had any discussion around that. In the negotiations I’ve had there, has been no discussions about Trent.”

Manly chairman Scott Penn also gave no indication of what role Barrett would have at the Sea Eagles.

“The reality is that Trent is still employed by the club and he has a contract on foot that we’re honouring,” Penn said.

“But at the same time he also resigned, so the club has the right and need to protect itself because we don’t have a coach from July next year.

“Under his employment agreement, without going into any detail, there is various options if you resign. I’m not a lawyer but under employment law if you resign then you are technically in a transition to leave. Then any company has to protect its interests. That’s all we’re doing.”

The reality is that Trent is still employed by the club and he has a contract on foot that we’re honouring.

Hasler did not say whether he intended to bring in his own coaching staff but was complimentary of current Manly assistants John Cartwright and Chad Randall.

Cartwright, who was a contender for the head coaching job, is overseas on holidays and it was unclear whether he would continue at the club after being overlooked for the top job.

Meanwhile, the Hasler announcement could be just the first of a series of NRL coaching announcements in the next fortnight.

Wests Tigers coach Ivan Cleary arrived back in Sydney from a family holiday on Monday with speculation continuing that he could join Penrith as soon as next season. The Panthers have offered Cleary a three-year contract from the 2021 season but he could link with his son Nathan if granted a release from the Tigers.

For that to happen, the Tigers would have to secure a coach of their own for next season. Their preference is Wayne Bennett but he has one year left to run on his contract at Brisbane.

The Broncos are also soon expected to finalise Bennett's replacement for 2020 and beyond.