Canberra Raiders coach Ricky Stuart says the one positive to come out of Josh Hodgson's knee injury is the making of Siliva Havili as an NRL footballer.

It means Hodgson's return to the Green Machine will also add some utility value for their crucial clash against Wests Tigers at Campbelltown on Sunday.

Like Hodgson, Havili can not only play hooker, but as a ball-playing lock in the middle as well. 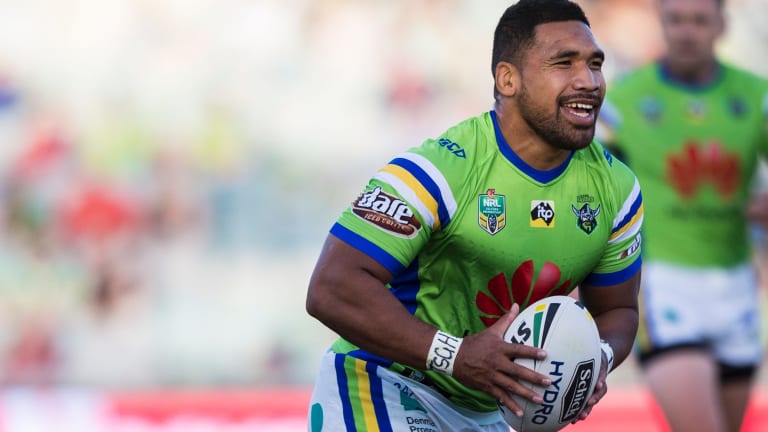 The only positive to come out of Josh Hodgson’s knee injury? Siliva Havili.

The Tongan rake drops back to the Raiders bench to make way for Hodgson's return from a knee reconstruction.

It will be Hodgson's first game since he hurt his knee playing for England at the World Cup last year, coincidentally with Havili the opposing dummy half in that semi-final against Tonga.

That sliding doors moment led to the resurrection of Havili's NRL career, with the 25-year-old starting in the Raiders No.9 jersey for the opening 14 rounds.

Stuart said while Hodgson had been a big loss for the first half of the season, there was one positive to come out of it.

"We've really missed Josh … we missed him with his directional play and leadership on the field as well. He's a great help to [captain Jarrod Croker]," Stuart said.

"The only benefit out of not having Josh Hodgson for the first part of the season is we've unearthed another very, very good first grader in Liva Havili. That's the positive of it.

"Having Josh back we'll be a better team having both players in our 17. But Liva has just been a wonderful find."

Hodgson praised the job Havili's done in his absence and said having a strong ball-runner like him would be a bonus for the Green Machine.

The returning rake said how Stuart would use the duo in tandem would largely depend on how many minutes he was able to play in his first game back since November 25.

As Hodgson's match fitness improves, Stuart might be able to use Havili as another option in the middle alongside the England international.

"He's a big kid, he's tough to handle when he carries the ball, so it's always an option for him [to play at lock]," Hodgson said.

"If you've got someone that size that's got good ball-handling skills and a smart footy brain on them it's always a good option to have to be able to play him in the middle as well.

"I suppose that will come down to how many minutes I end up punching out as well."

Stuart added having Havili as a hooking option could also allow Hodgson to play in the halves if required.

Havili came to Canberra off the back of a successful World Cup campaign with Tonga, after St George Illawarra released him last year.

He had a two-way battle with Craig Garvey to fill Hodgson's boots, with the former getting the nod to wear the No.9 jersey since round one.

Havili played less than 31 minutes in round one, but was forced to play almost 78 minutes when Ata Hingano was knocked out in the Raiders' gutsy, round-five victory over Canterbury.

Since then he's shown he can play the full 80 if required – as he did in the one-point loss to Penrith last weekend.

But Stuart revealed he could've only lasted about 10 minutes of an NRL game when he first arrived in Canberra.

He said the performance team had made a similar transformation with Dave Taylor last season.

"I personally believe the team has handled [Hodgson's loss] so well and that has got to be credit to Liva, who has done a wonderful job of filling in in that position," Stuart said.

"When he got here he was a guy that could probably sustain about 9-10 minutes of NRL football.