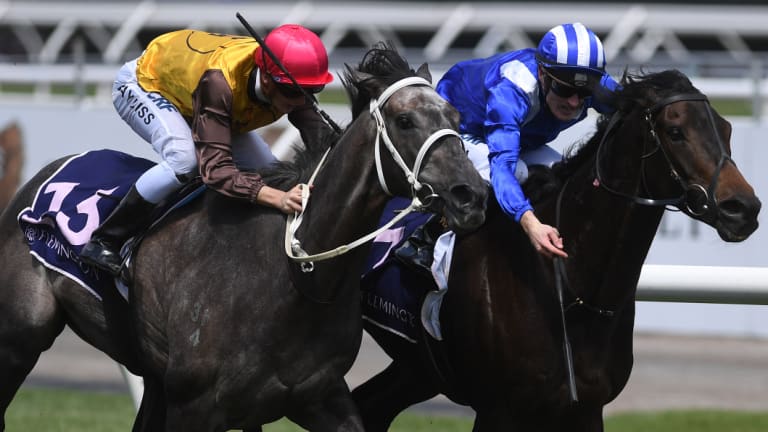 In racing, as in almost all sports, centimetres and fractions matter. Enormously.

A month ago on Turnbull Stakes Day as the Queen of the Turf Winx was strutting her stuff in the warm up run before her epic fourth Cox Plate triumph, the stayers and the wannabee Cup contenders were part of the supporting cast.

They were doing battle in the 2600-metre Bart Cummings, a handicap in which the prize for the winner was even greater than the race's $302,000 stakemoney.

Whoever scored in that group 3 contest was guaranteed a start in the greatest race of all, the Melbourne Cup.

David Hayes-Jaameh gave his all, battled to the line and went down by the minimum margin to the favourite Avilius, a horse carrying Godolphin blue and trained by the grandson of the Cups King Bart Cummings.

Hayes and his crew lodged a protest at the time – ironic given that Jaameh was owned by Sheikh Hamdan Al Maktoum, the brother of Godolphin's creater Sheikh Mohammed – in the desperate hope that they might get the result reversed, so keen were they to ensure Jaameh could qualify for the Melbourne Cup.

That attempt failed so in a last gasp bid to get the son of Iffraaj into the Cup field Hayes and his training partners, son Ben and nephew Tom Dabernig, rolled the dice on Derby Day last Saturday in the 2500-metre Lexus Stakes, another race which guaranteed the winner a spot in the Cup field.

The trainer had been telling people all spring that Jaameh was his best Cup hope, especially with the light weight he had been allocated – if only he could get into the race.

Again the gamble almost came off – but not quite as Jaameh ran valiantly to finish third behind A Prince of Arran, who took the last spot in the $7.3 million race.

The strength of that form became apparent in the Cup itself when A Prince of Arran and Michael Walker battled on tenaciously to finish third to Cross Counter, leaving Hayes to rue what might have been had his charge won the Lexus or beaten Avilius a short head instead of losing by that margin.

So the trainer could have been forgiven for thinking what might have been when he legged Mark Zahra up in the Flemington yard on Saturday in a race which is effectively a Cup consolation, the 2600-metre Queen Elizabeth Stakes.

The English import showed that Hayes judgement was not far off, displaying plenty of fight, guts and spirit to come back off the canvas to down Sully close to the line to land the spoils with Libran, the former English stayer, third.

It looked as though the Trent Busuttin and Natalie Young trained Sully had seen off the challenge of Hayes galloper: certainly the trainer said afterwards that he had given up hope after the leader went at least a neck clear.

But Zahra conjured a second wind out of his partner and Jaameh did the rest.

''He was beaten and he really stuck on,'' said a delighted Hayes, who will now aim Jaameh at next year's Sydney Cup and, hopefully the Melbourne Cup of 2019.

''He should have finished very close to Prince of Arran, he needs momentum. If you really watch the Hotham (Lexus), on the line it was an old fashioned great Cup trial, he was really sticking on well and he pulled up hard. Hopefully that will get his rating up enough (to get into next year's Cup).

''I was spitting the dummy when he ran past us, I didn't even look,'' Hayes joked.

Zahra added: ''He quickened up good, but he (Sully) never got away from me. I knew he would be hard fit and stay as they were heading towards the Melbourne Cup but it wasn't until the last 25 metres that I got back in front.

''The horse used to be a little bit keen in his races, but I put him to sleep today, I could have had him anywhere. I bided my time and got the split when I needed it, but through the line there was none stronger.''