Jarryd Hayne has called for a Pacific Test to be taken to the United States, arguing it would attract a bigger crowd in his once-adopted home than the clash between England and New Zealand will.

Hayne is desperate for Fiji to take a more prominent spot on the international calendar, as he prepares for Saturday's annual Pacific Tests at a packed Campbelltown Sports Stadium with Papua New Guinea, Tonga and Samoa. 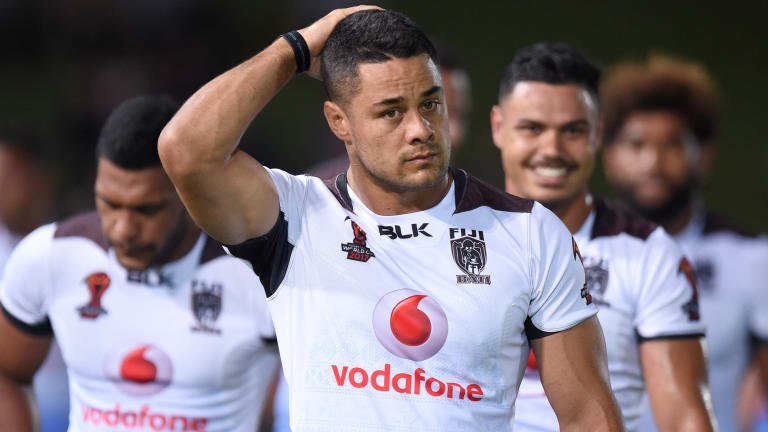 Fly out Fiji: Jarryd Hayne believes pacific nations would have a wider appeal in the US than England v New Zealand.

The matches come on the same weekend as New Zealand and England's controversial Denver Test, with the event's promoters trying to push the sport in America ahead of their 2025 Rugby League World Cup.

But Hayne, who was recognised by many expat Pacific Islanders while living in San Francisco during his NFL stint, said the best way to build traction would be to take Fiji, Samoa or Tonga across.

"I think the biggest untapped market is America," Hayne said.

"I know they are having the England and New Zealand Test over there, but I just think if you want to pull a big crowd you need to get some of the smaller nations.

"There are so many Pacific Islanders there who absolutely love the Islands. They are so passionate about it because over there it's all about America.

"So when you get your own thing people go above and beyond to represent it.

"I definitely believe that Tonga or Samoa would be bigger over in America than Australia or New Zealand."

Hayne's comments come after the success of last year's World Cup, with talk of a Tongan Test against Australia later this year also being floated.

Both Fiji and Tonga beat the Kiwis en route to the semi-finals of last year's tournament, while the fourth edition of the Pacific Tests in 2017 sold out after it also featured England.

"Every year has gotten better and better," Hayne said.

"Last year they put England there as one of the big three and now we've got our own standalone weekend with Samoa and Tonga as the No.1 game. I think that's huge."

But Hayne is desperate to get to the point where it can be financially viable for the teams to play more than just once per year and outside the middle of the season .

"If there is an Australian tour, an England tour and a New Zealand end-of-year tour, why can't there be a Fijian tour, a Tongan tour or a Samoan tour?" Hayne asked.

"Speaking to [NRL Pacific strategy manager] Franky [Puletua] a couple of weeks ago, we're almost on par to break even with the Pacific Tests, which is a huge thing.

"Because we don't have many major sponsors … obviously the NRL is the big booster of making it all happen.

"But if we can get to the point where we can tell a sponsor year by year, with naming rights and all that kind of stuff, I think it can be huge."