Newcastle coach Nathan Brown is happy for Kalyn Ponga to make the call on whether he perseveres with playing at five-eighth – not fullback – in a show of faith in the 20-year-old's natural abilities.

Ponga wore the No. 1 jersey for the Knights but switched to the halves alongside Mitchell Pearce as expected in the Knights' 20-12 victory over Penrith on Saturday afternoon. 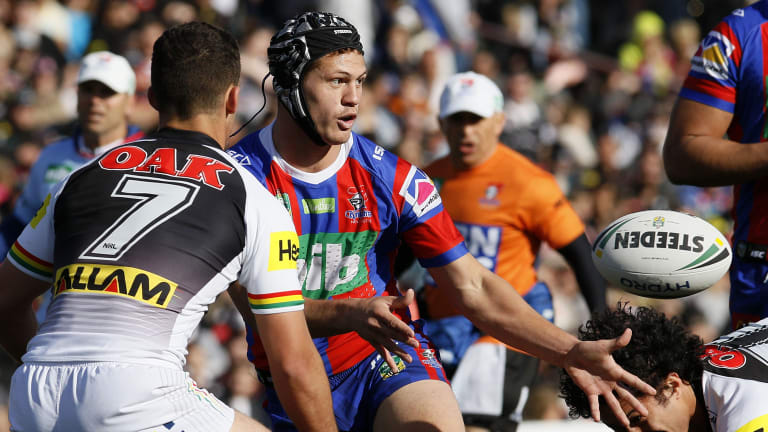 Pin-up: Kalyn Ponga directs traffic after switching to five-eighth for the Knights.

And Brown will stick with his $3 million pin-up in the halves next week before leaving it to the man himself.

"When he's at five-eight, in a lot of ways he gets more of a chance to put himself around the ball and he has more energy to support because obviously fullbacks do a lot more running.

"He'll probably start there next week. It doesn't matter where you put him or who coaches him or which club he plays for because he'll play well.

"It's Kalyn's career so you'll have to ask him that question [about making the permanent switch].

"Him and Connor [Watson] are good little footy players so they're interchangeable in the long run.''

Brown has the luxury of playing Ponga in the halves to ease the workload on his dodgy ankle and because Nick Meaney can play fullback. But Meaney will join Canterbury next year, while Jack Cogger, a back-up five-eighth, is also bound for Belmore.

Ponga himself said he would do what was best for the team, and but hinted five-eighth remained his first choice.

"I'm still learning my craft at the back and enjoying that side of things,'' Ponga said.

"I'm in no rush to be put in the halves, but I'll play there if it is best for the team.''

Ponga was happy to pass on Johns' verdict that he would survive in the front row, and said the only time he would contemplate such a move would be Origin.

"I'll play any position in that arena, but I'd prefer not to in club land," he said with a smile.

Plenty of fullbacks have made the successful switch to five-eighth, but often later in their careers. Darren Lockyer was one, while Cronulla recruit Matt Moylan has now completed the transition.

Ponga will go head to head with Moylan and Cronulla in the Shire next Sunday. He will not play finals football, but backed Penrith to still do something come September.

"When their forwards are on, they're one of the best packs in the comp,'' Ponga said.

"And with [Nathan] Cleary steering the ship, I have no doubts they'll do well.

"Finals are finals and it doesn't matter what you've done before that. You're playing for your life.''

Pearce said the Knights' defensive effort against Penrith had given the pair every chance to turn it on in attack.