A helicopter was used to search for two minors suspected of using dirtbikes to leave skid marks on a green at Twin Creeks Golf and Country Club during the first round of the NSW Open on Thursday.

The $400,000 tournament, which is part of the PGA Tour of Australasia, was plagued by the incident during the afternoon wave when a couple of troublemakers were thought to have ridden their two-wheelers onto the course. 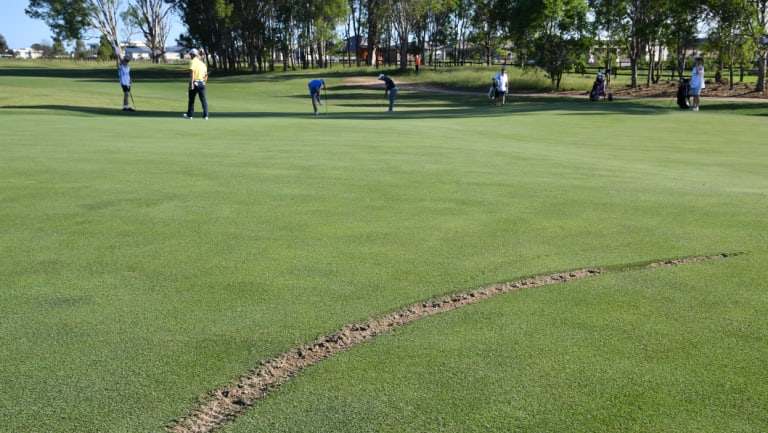 Damage: the skid mark left on the back of the 16th green during the first round of the NSW Open at Twin Creeks Golf and Country Club.Credit:AAP

They left a noticeable skid mark on the back of the 16th green, which sits adjacent to a publicly accessible road inside the residential estate within which the championship golf course is built in Sydney's greater west.

Tournament organisers raised the alarm and a helicopter was sent overhead to try to track down the assailants, but as the first round came to a close they were still yet to be found.

The skid mark had no noticeable effect on most of the afternoon players given the pin on the 16th was tucked hard on the front of the green.

Twin Creeks has a number of houses built along its border and is hosting the NSW Open for the second straight year. It is understood the club has previously had issues with dirtbike riders accessing the golf course.

Course curators were working on the damaged green late on Thursday night and were confident of repairing the damage in time for Friday morning's early tee times.

The saga took some of the gloss off a congested leaderboard after the first 18 holes, which was punctuated by a late arrival on course surging into contention despite almost being disqualified before he started the tournament.

A frantic Aaron Pike blamed an overnight software update on his smart phone for missing an alarm – causing him to arrive on course just 10 minutes before his tee time – as he shrugged off the early drama.

The Victorian PGA champion and world No.808 virtually jumped straight out of his car and onto the first tee before firing a five-under 67 to be just one shot shy of first round leader Jarryd Felton.

"I had a bit of a rough start today," Pike said. "Jack Munro, who I am staying with, slept through his alarm and my phone software updated overnight, and my alarm turned itself off. So I only got here with 10 minutes to spare, it wasn’t the greatest preparation. It wasn’t a good look.

I only got here with 10 minutes to spare, it wasn’t the greatest preparation. It wasn’t a good look

"But we got here in time. I am not sure how Jack went, but I was feeling good and playing nice. I got to hit a few balls to warm up. I am going to buy an alarm tonight!"

But the man they'll have to catch is Western Australian Felton, who has been a perennial NSW Open contender in recent years.

The 23-year-old was the best of the morning wave with four straight birdies in his final five holes catapulting him to the lead, having finished in a tie for sixth and second in his last two appearances in the state championship. 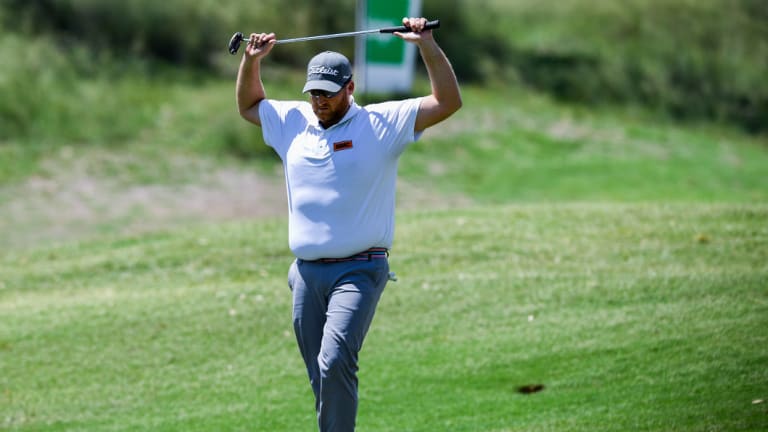 Cause for alarm: Aaron Pike.Credit:AAP

Felton has battled form and illness during a stint in Asia, but credited a resurgence with his putter for a fast start to the PGA Tour of Australasia event.

"I don’t normally make that many birdies, but I made them today so hopefully I can keep it going over the next three days," Felton said.

"I only missed one green today, so I gave myself a lot of chances. They paid off at the end of the day, I made some nice putts. My putting has been horrific lately, so it’s nice to see it turn around. I like this layout, it's open off the tee but you still need to take the right lines."

Victoria's Cameron John birdied his last hole of the day to join Felton atop the leaderboard.

Meanwhile, New South Welshman Michael Pearce recorded his first hole-in-one in a professional tournament after acing the second hole during the first round.