The Canberra Raiders board and chief executive Don Furner will use their trip to Huawei's China headquarters to begin discussions around extending the technology company's sponsorship deal.

Huawei are signed on until the end of 2019, when they will become the Green Machine's longest serving major sponsor after coming onto the front of the Raiders' jersey in 2012.

The Raiders will hold a board meeting in China, where they are Huawei's guests for the week after flying out on Sunday.

They'll return in time for the Raiders' crucial clash against the North Queensland Cowboys in Townsville on Saturday.

The Cowboys broke a five-game losing streak to beat the Gold Coast Titans on Saturday, while the Raiders are looking to bounce back from a 20-point loss to South Sydney in Gosford.

Townsville hasn't been a happy hunting ground for the Green Machine, who have lost their last nine trips to the far north and haven't won there since 2006.

They lost last year's clash against the Cowboys to a freak golden try, when Johnathan Thurston's field-goal attempt hit the underside of the crossbar and stayed in play for Gavin Cooper to score the winner.

Raiders lock Luke Bateman expected both teams would be desperate to turn around their poor starts to the season.

Canberra's 12th,  three spots about the Cowboys on the NRL ladder with only point difference separating them.

Bateman said it was a "must-win" game for the Green Machine.

The Rabbitohs repeatedly sliced open the Raiders' right edge on the weekend, but Bateman said it was the middles' fault for not putting on enough inside pressure.

"It's a hard place to defend, the edge, and I don't envy them. When we're not helping them out it just makes it twice as hard for them."

But Canberra second-rower Joe Tapine, who plays on the right, said it was too easy to simply blame the middles and the right edge needed to be accountable as well.

The Rabbitohs scored their opening two tries through five-eighth Blake Austin, while their third was from an overlap that left winger Jordan Rapana exposed.

"It's a tough job for the middles, they always take the blame when anything goes wrong, but we've got to make our shots as well," Tapine said.

"We'll just work on that and the middles will work on their stuff and the team will come out better." 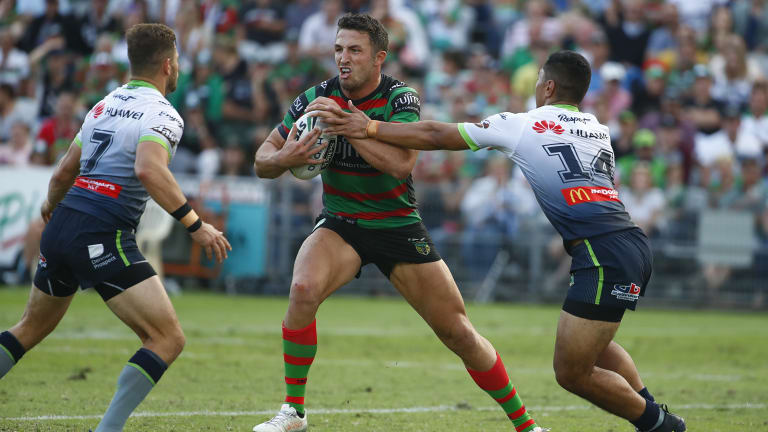 Ex-New Zealand Warrior Ata Hingano had his longest stint in a lime-green jersey, playing 41 minutes at hooker against Souths.

Before that he played just 13 minutes in his first two games, which included getting knocked out after just two minutes on debut.

The five-eighth came to Canberra seeking opportunity after he got stuck behind Shaun Johnson and Blake Green at the Warriors.

While his long-term goal was to play in the halves, Hingano said his sole focus at the moment was improving as a rake.

"Yeah definitely, but at the same time I'm still young so just even getting the opportunity to play first grade I'm just biding my time and still just learning the game a bit more here," the 21-year-old said.

"At the moment my role is a nine, I'm just trying to focus at nine, because I know that will contribute to the team and help them there.

"I can't really be in two minds of trying to play two positions."