Essendon captain Dyson Heppell has issued a public warning to teammates that players who aren’t “buying in” shouldn’t be playing in the Bombers’ senior side.

The Dons’ loss to Hawthorn on Saturday was their third in a row and left them with just two wins from seven games in 2018, with Heppell conceding that the Bombers were "a bottom of the road side". 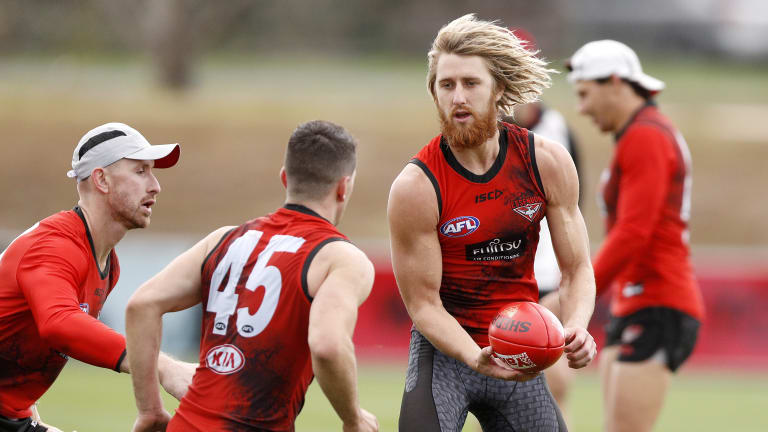 Goalsneak Orazio Fantasia looks poised to return from injury when Essendon face Carlton at the MCG next Saturday, but Heppell said others had to be on notice.

“I think it’s the nature of it. If you’re not buying in and playing the Essendon way, then you shouldn’t be playing footy until you can prove that you can buy into our game style,” Heppell told The Age.

The second-year skipper said he wouldn’t change his leadership style.

“I’ll continue to do my role, keep challenging the group. Keep putting my head over the footy and doing what I can. [We want to] share the load amongst the rest of the playing group, try and get as many leaders as we possibly can. We’ve got a great bunch of young guys and a lot of them that aren’t in the team at the moment that are pushing for spots, who are around the club with great attitudes, who challenge each other and train really hard.

“So potentially they might get opportunities if they’re playing our style of footy.”

The Dons are yet to win a third quarter this year, losing all seven they’ve played by a total of 136 points. Coach John Worsfold said the Dons had tinkered slightly with their half-time routine ahead of the Hawks clash, and Heppell said he was scratching his head about the side’s third term woes.

“Really can’t put my finger on it.

“We definitely need to address this, have a good look and find out what’s going on.”

But Heppell shared Worsfold’s sentiments that Essendon’s problems were deeper than just one quarter a week.

“We’re out of form. It’s as simple as that. We’re an out of form team. And we’re a bottom of the road side at the moment, and that’s realistic.

“We’ve got to own up to that. Nothing will change about the way we approach games, the way we prepare, we’re going to I guess challenge each other on the track. It comes back to that. Give our honest feedback, but there’s no point moping around now, round seven of the year. Things can turn quickly if you do stick together and get it right."

Worsfold said after the game on Saturday that the Dons would select players who were playing well.

“The only thing we will do with selection is pick players in good form that deserve an opportunity to play in the seniors,” he said.

Dylan Clarke, Mason Redman, Jake Long and Kyle Langford were all busy for the Bombers' reserves in their win over North Melbourne on Saturday, while Aaron Francis got through a full game as he makes his way back from an extended absence due to mental health issues.