FROM the jungles of Brazil to the steppes of Kazakhstan, England superfan Brian Wright has lavished £140,000 on his dream of seeing ­football coming home.

The dad of three has dodged brutal riot police and rampaging Russian ultras since he began following England in 1988. 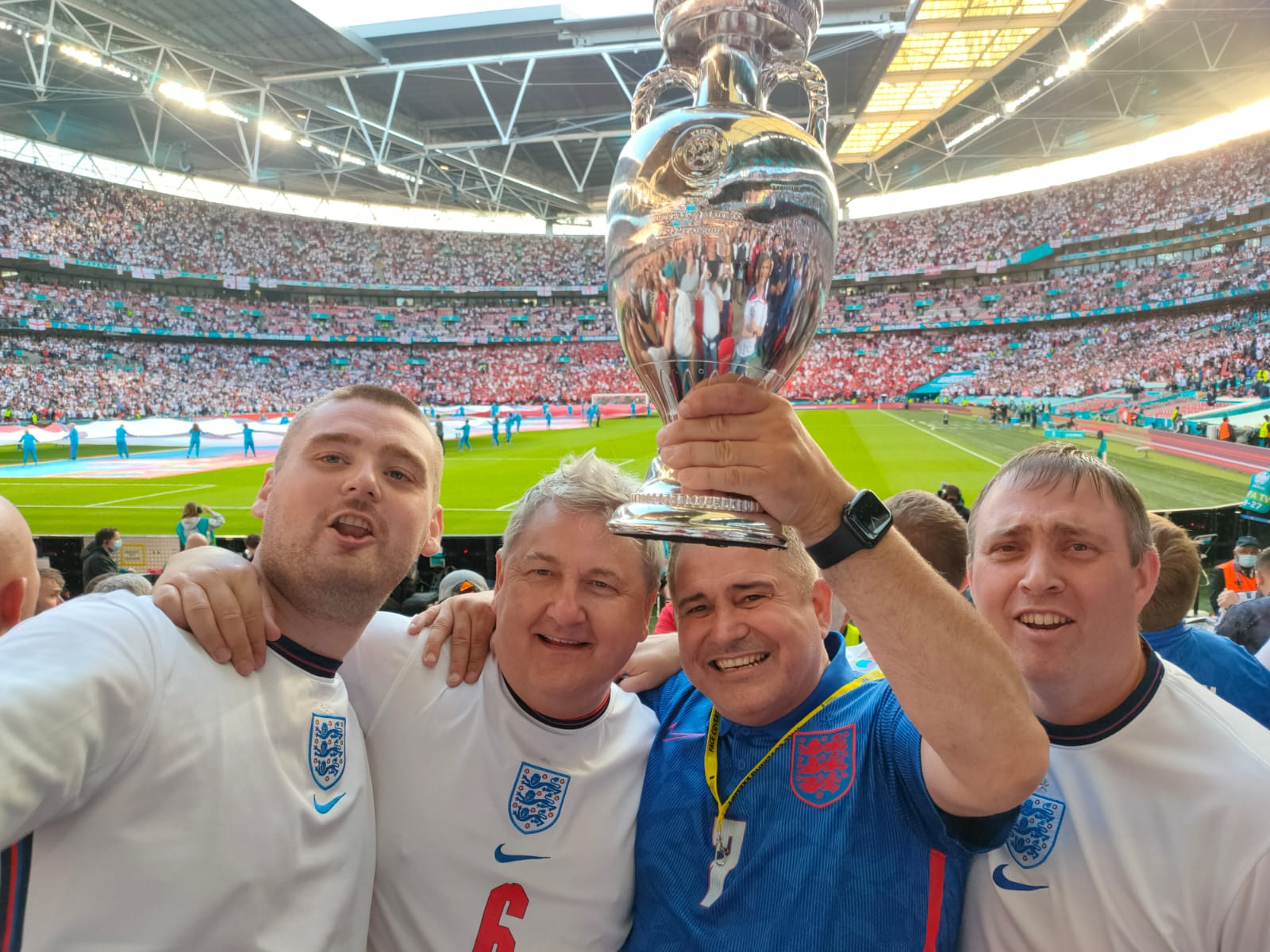 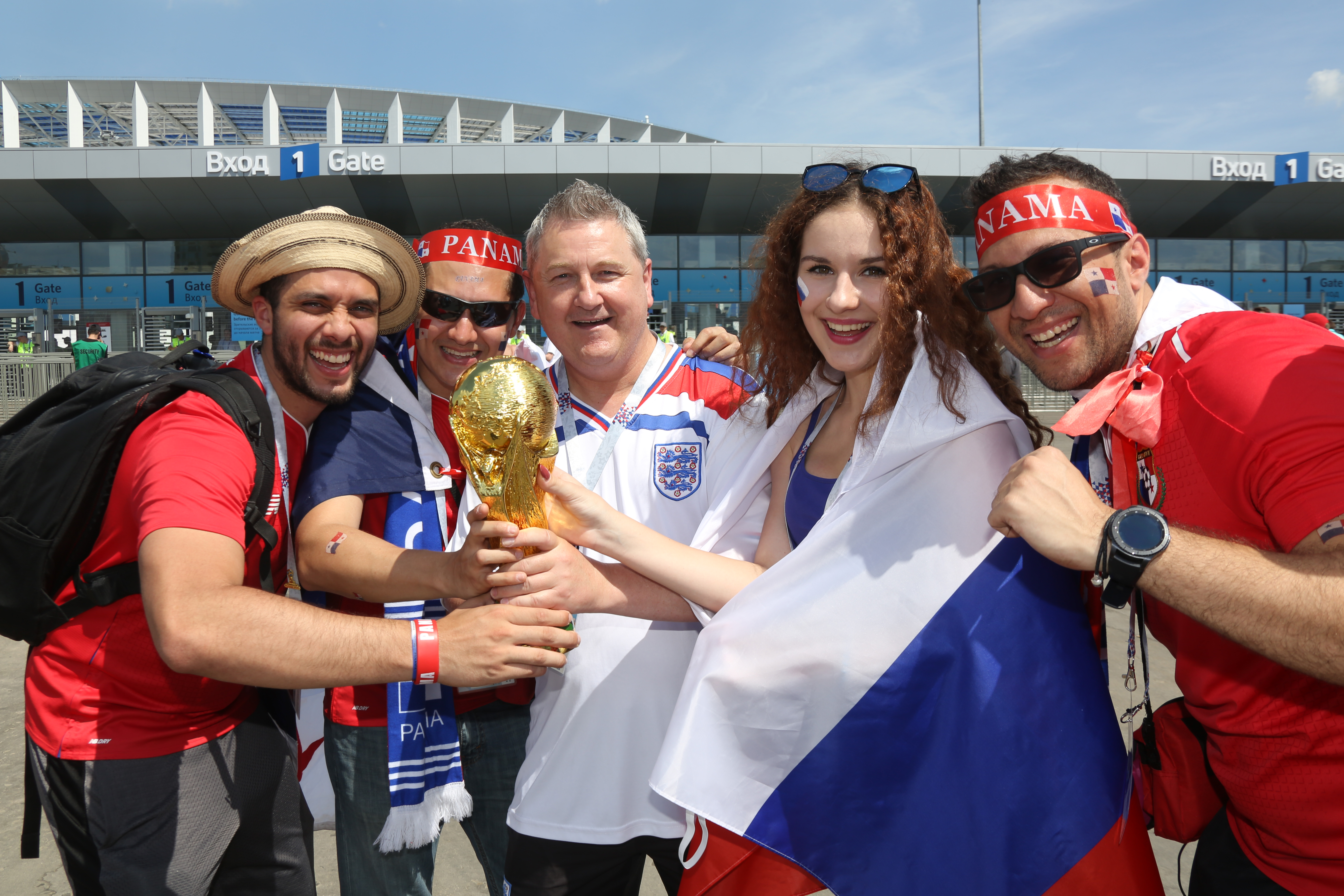 Now, as he approaches his 370th — and greatest — England game, Brian says it was all worth it.

Speaking exclusively to The Sun, Brian, 51, said: “I think  I’ve earned the right to be at ­Wembley on Sunday.

"For all those terrible trips when it’s been raining or cold, being kept in a ground for three hours after a game, or treated like animals by local police.

I’ve watched a lot of dross over the years. You can count on two hands the amount of games that were memorable — and we usually lost those.

“So no amount of money will prise that ticket for the final from my hands.”

Over the years his England adventures have seen him wrestling a sumo in Japan, fishing for piranhas in Brazil, kipping in £6-a-night Russian hostels and being clobbered with a police baton in Poland.

He has been to more  England games  than Sir Bobby Charlton, Gary Lineker, Wayne Rooney and Harry Kane have in ­combined caps.

The Coventry City fan added: “It’s not just about getting together in a pub and singing ‘England’ — I like to see a bit of the country I’m in and experience the  culture.

“People I’ve met at games have become lifelong friends who I regard pretty much as family.”

Brian, who runs a football league and works as a courier, caught the Three Lions bug at his first international game — Holland’s 3-1 win over England in Dusseldorf at Euro 88.

“There were 5,000 English fans in a sea of orange Dutch fans,” he remembered.

“The place was bouncing. I fell in love with the camaraderie and, despite not winning a  game in that tournament, I was hooked.

“I followed England from that day on — only missing games for two funerals, a wedding and when Covid restrictions applied.”

His early days supporting England  were plagued by hooliganism. Brian, from Chesterfield and married to wife Lisa, 47, explained: “There was fan trouble at games back then. I never got involved, I just wanted to watch the football.

“I got hit over the head with a police baton. I was just queueing to get into the ground.

“Inside, the Polish fans — some from Poznan and some from Warsaw — were fighting each other.

“We asked a steward, ‘Why are they fighting?’ He replied, ‘To see who will fight you’. It was a terrifying journey back to the station.

“The Japan World Cup in 2002 was the first time we’d gone somewhere and been welcomed as fans.

“It may have been too far and too expensive for the troublemakers.

“It was a brilliant experience. We were treated with respect and we showed the Japanese respect as well.

“After England beat Argentina in Sapporo I stayed up celebrating for two days.

“Some of us fans met a giant sumo wrestler in a park. We took turns  wrestling him, but one by one, he picked us up and threw us in a fountain. It was all good-natured.

“I’m left with so many beautiful memories.”

Not so rose-tinted was the game Brian described as his worst ever — England’s 2-1 loss to footballing ­minnows Iceland at Euro 2016.

He said: “It was dreadful but I didn’t think about giving up following England.

“Sometimes the actual 90 minutes are the worst part of the trip.”

On Sunday Brian will arrive at Wembley in a St George flag- festooned limo.

He said: “Money can’t buy all the memories I’ve got and the people I have met following England.

“Now we’re finally in a final again and it’s like a dream come true. It feels like my lifetime following England has been worth it.”

MEET THE OTHER SUPERFANS

SUPERFANS Denis Gristwood and Neil Wallace were at Wembley in ’66 when England won the World Cup.

Here, they tell MIKE RIDLEY how they will be back in the new home of English football tomorrow – hoping history will repeat itself, this time against Italy.

DENIS  will pull on a lucky team shirt given to him by singer Olly Murs when he goes to Wembley tomorrow.

The retired plumber, who turns 91 on Tuesday, will have the best ­birthday present ever after waiting 55 years to see England in another final. 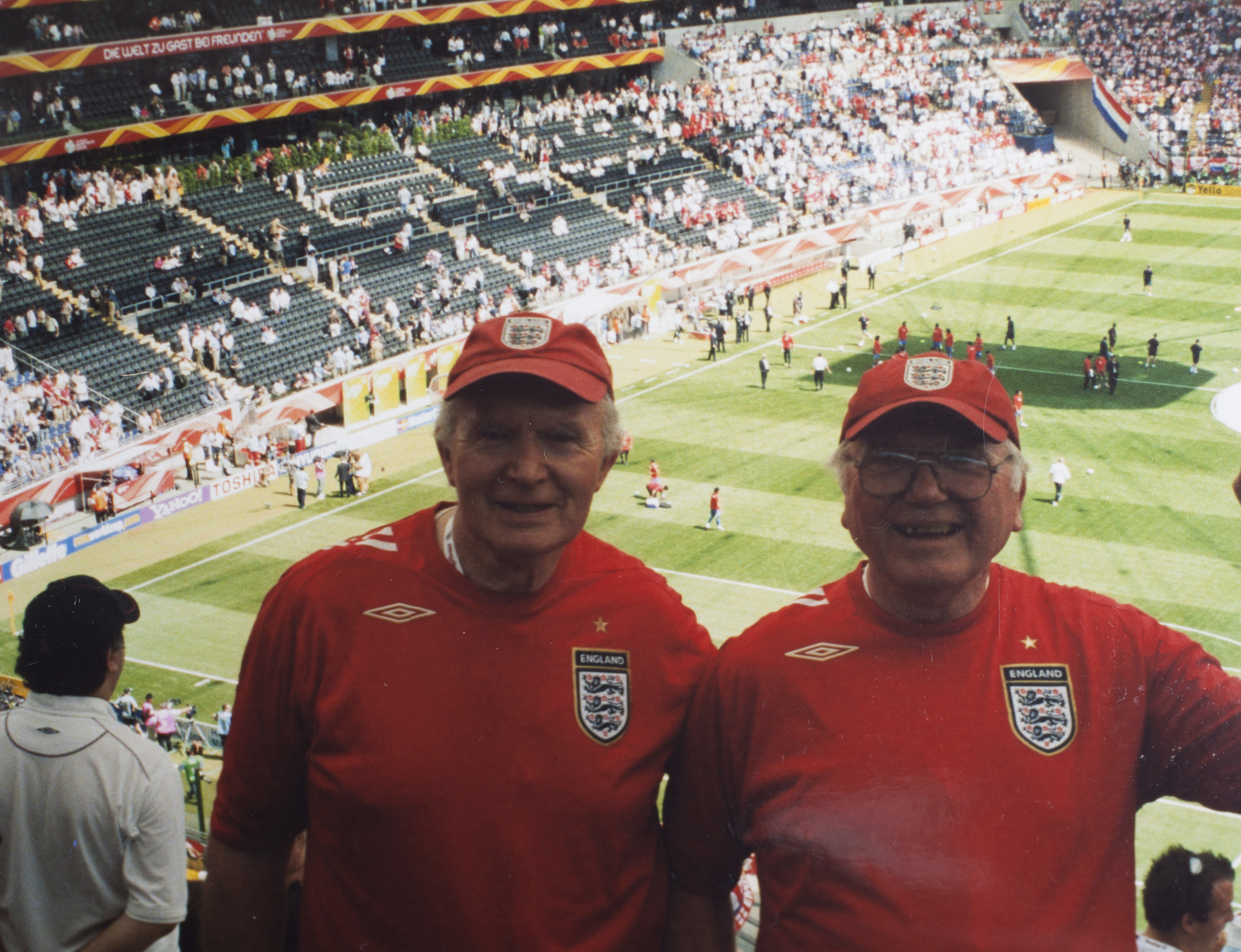 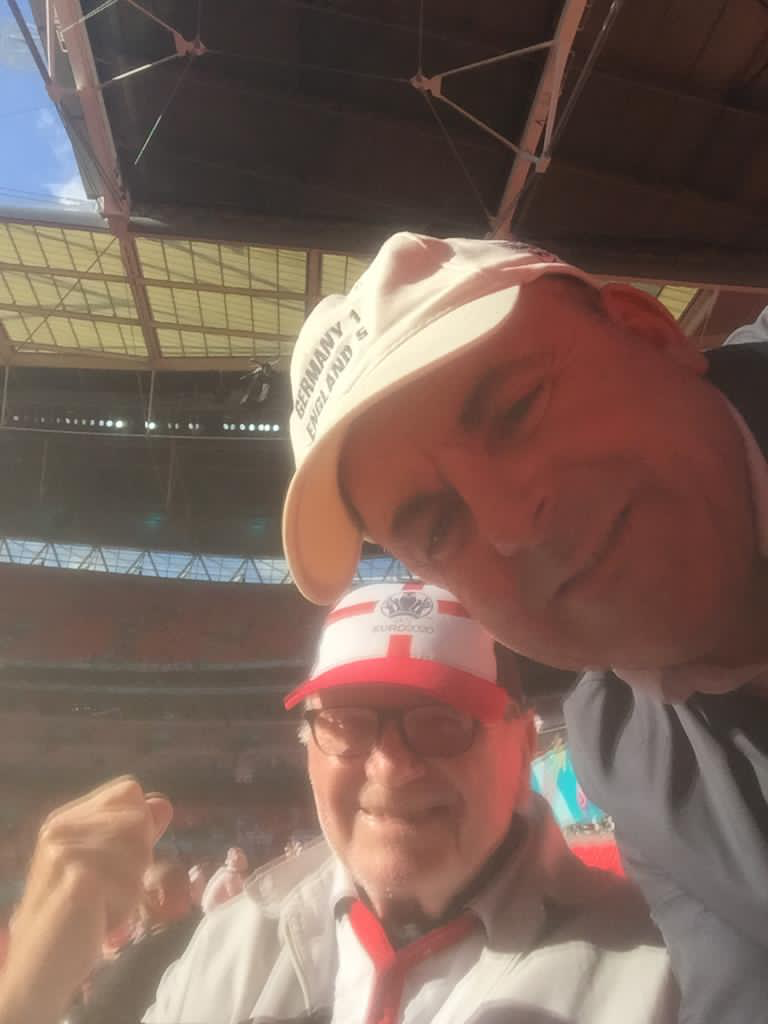 Denis – who has been to more than 250 England games – says: “After all that time, I have got used to accepting defeat  but it would be brilliant to see them win a final again. I was beginning to doubt it would ­happen in my ­lifetime.”

Denis and his brother Bill,  93 – who will be watching the match on TV at his care home in Northampton – have ­supported England through thick and an awful lot of thin since they sold horse manure to pay for tickets to their first England game, at the time of  the Blitz.

Since watching their first game – England v Scotland in 1941 – they have spent a small fortune following the national side in 12 tournaments all over the globe.

Father-of-four Denis, from Greenford, West London, says: “We’re so well known at  Wembley that when we once missed a match everybody thought we’d died.”

In 1966, Denis was at Wembley. He remembers: “There was no segregation at the stadium in those days, so I had a German guy standing  right behind me. 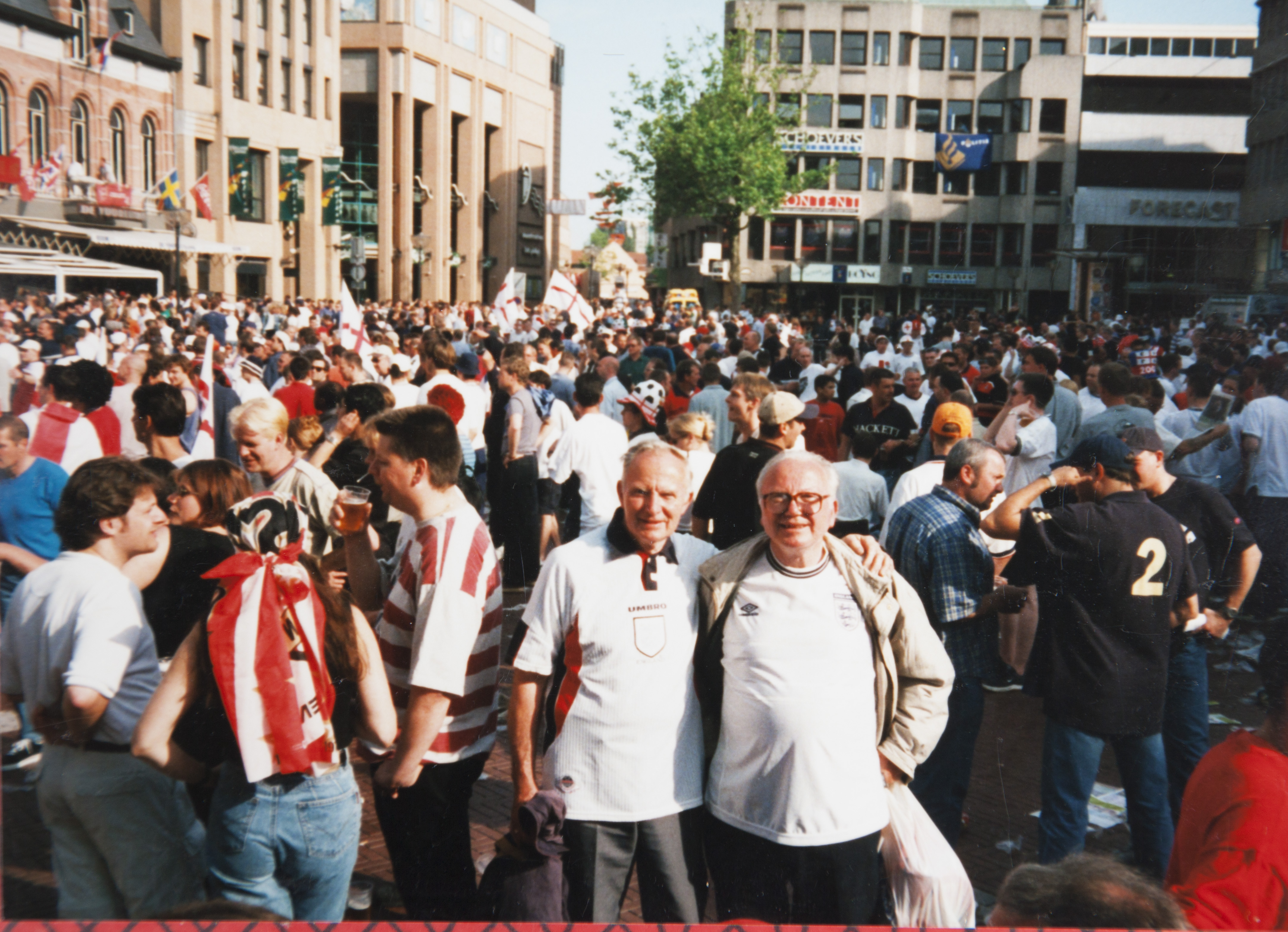 "When Jack ­Charlton fouled and Germany scored from the free kick, the guy behind thumped me in the back, so I turned round and chinned him.
“The police turned up and booted the German out as he’d hit me first.

“I was elated when we won. I walked home carrying my programme, a stuffed lion like the mascot World Cup Willie and a model of the Jules Rimet cup for my kids (inset ).

"When I got home they thought  I was on the team and had won the trophy myself.

“Watching England win the World Cup was the best moment of my life. You forget a lot as you get older but I’ll never forget that.”

RETIRED engineer Neil  was in the 96,924 crowd at the old Wembley ­Stadium when England won the  World Cup.

And he hopes to be the Three Lions’ lucky charm once again, this time against the Italians in our first major final since that never-to-be-forgotten 4-2 win against West Germany in 1966.

West Ham supporter Neil’s ticket to roar on the team in the big game comes courtesy of his son Matt, who paid £5,000 for two seats. It’s  a far cry from 1966, when Neil shelled out just £5 to watch every England game. 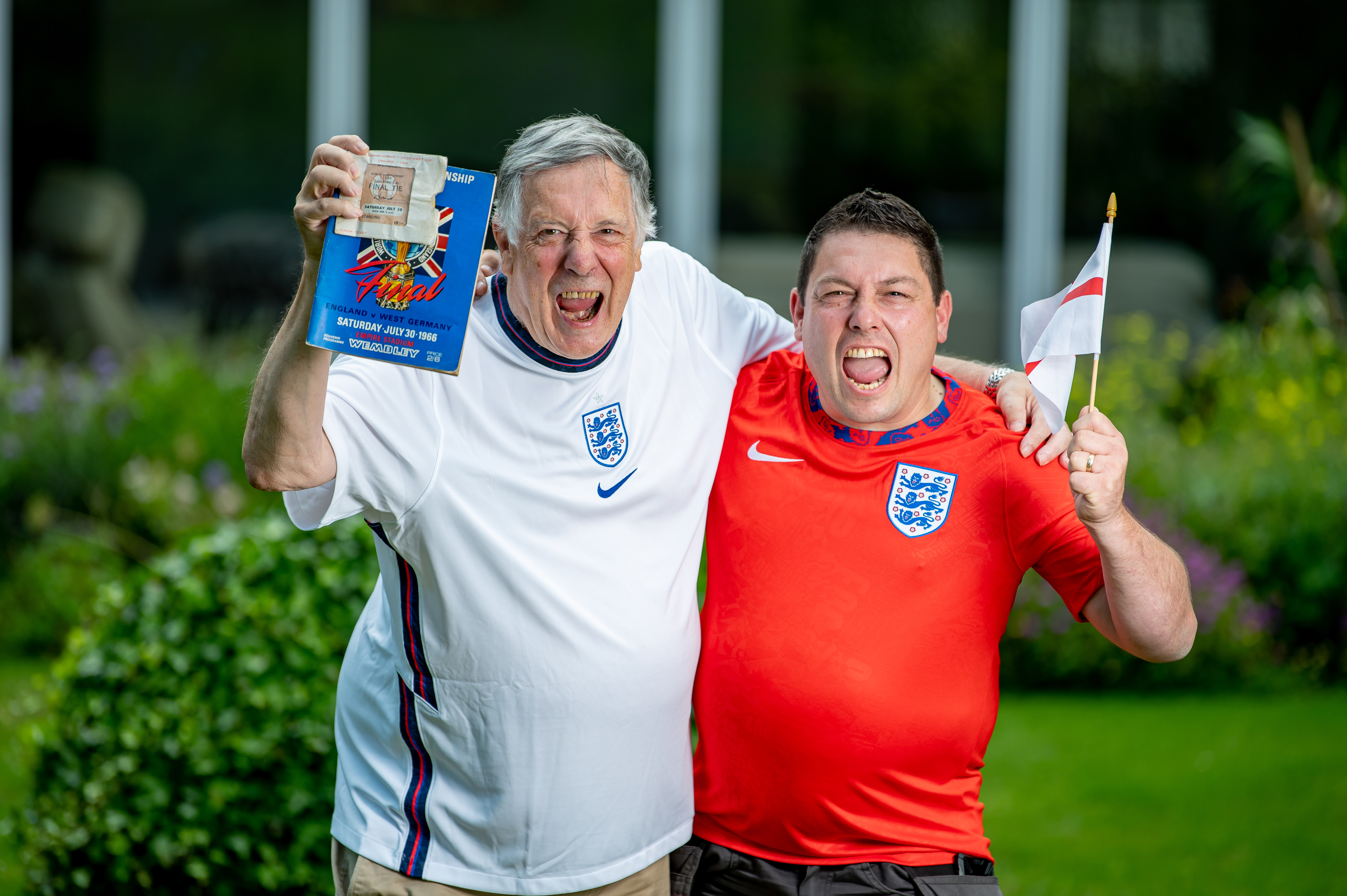 Neil, of Coulsdon, Surrey, says: “They are the two best teams in the tournament. It is going to be a cracker but with home advantage I think there can only be one winner: England.

“I was a massive football fan along with three of my friends. We used to play for a local Sunday league team and we were all regulars at Upton Park to watch the Hammers.

“So when we saw that World Cup tickets were being advertised for a fiver to get into all the matches, we realised it was an amazing deal and jumped at the chance to buy them.

“The tickets arrived in a little wallet and we couldn’t have been more excited.  Obviously, in the beginning  we didn’t have any expectations that England could get to the final, let alone win it. 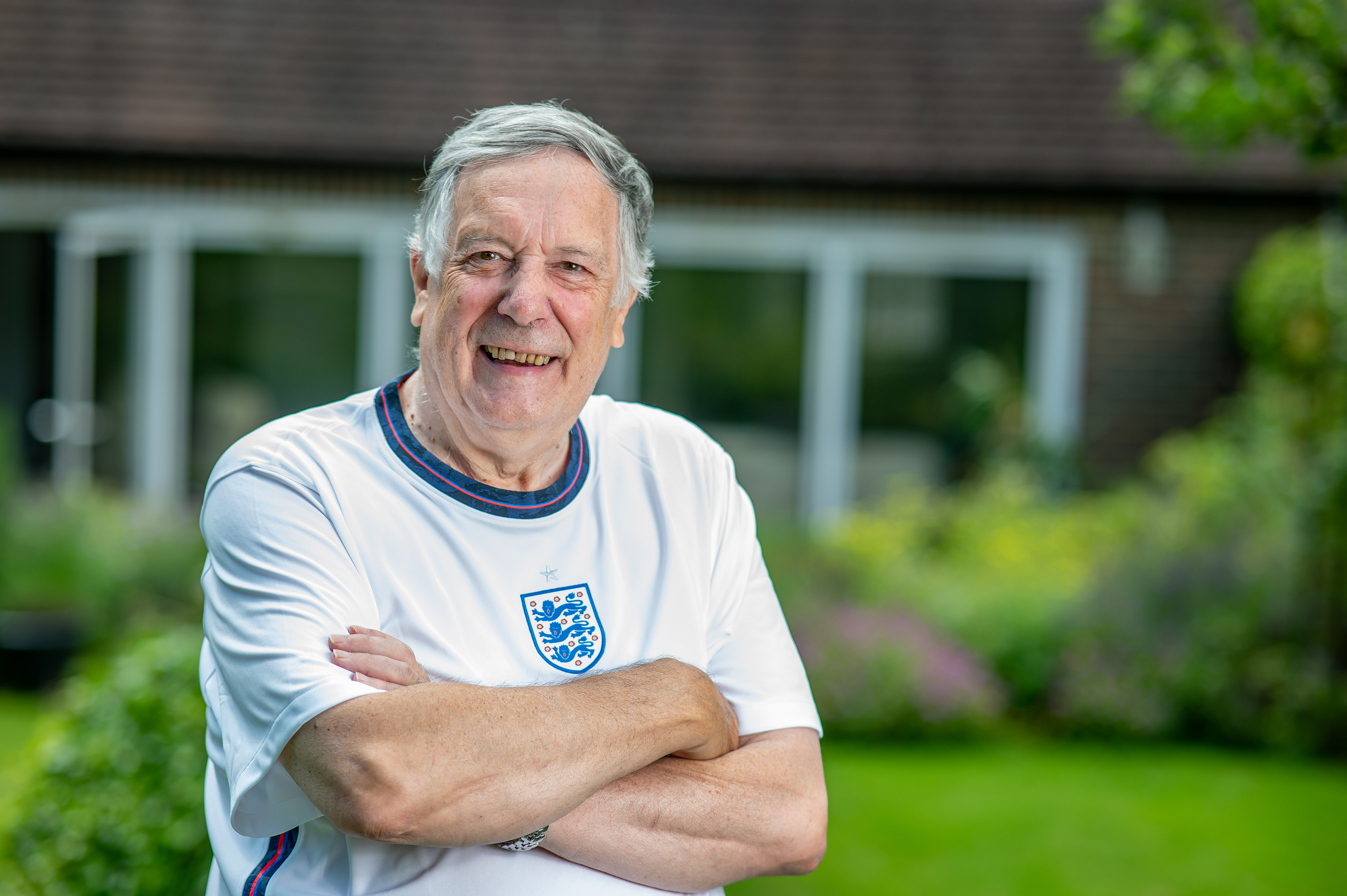 “But it was fantastic when we got out of the group stages and then beat Argentina in the quarter-finals.

"Everyone expected England to be beaten by Portugal in the semis because of their star man Eusebio.

"But in the end he just didn’t show up. The next thing we knew we were in the final.”

Matt bought his dad the tickets to try to recreate that 1966 magic, even though England still had to beat ­Germany when he got them.

He says: “I wanted to do something really special for Dad, and I had a lightbulb moment to buy tickets for the final.

"They were expensive at £2,500 each, but to see the excitement on his face was brilliant.”