Usain Bolt may have completed just two light training sessions but one of his new Central Coast Mariners teammates is adamant the Jamaican sprint star has what it takes to “make it” after witnessing the belief and confidence he has in himself.

The Mariners have been cautious not to throw the eight-time Olympic gold medallist in the deep end as he begins his quest to make it as a professional footballer in the A-League. 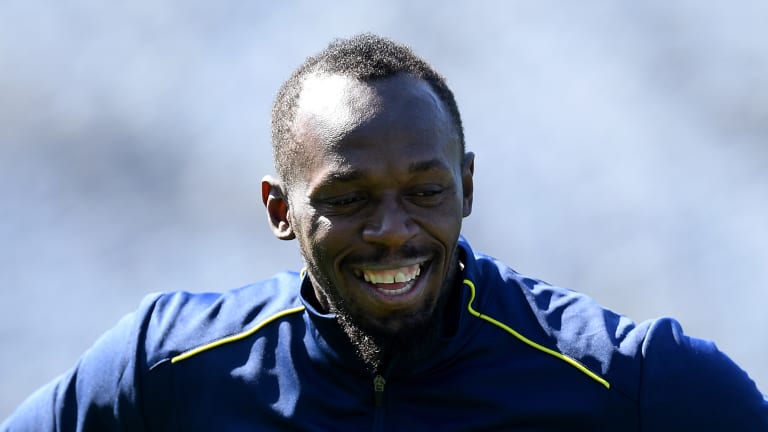 Trial: Usain Bolt in his first training session with the Central Coast Mariners.

After getting through his first training session in front of dozens of cameras in Gosford on Tuesday, Bolt went through a similar hit-out the following day.

There have been no intense skills sessions or mini-games for teammates to get a definitive gauge of whether his latest dream is the real deal.

The 32-year-old does, however, have an unmistakable air of confidence in the way he goes about his business that has convinced those around him they would be foolish to back against him.

“He knows what he wants, he’s so determined … he has so much self-belief and confidence that he’s going to make it,” Mariners defender Antony Golec told Fairfax Media. “That’s what you need as an athlete. He’s got six weeks to prove not just to the club but to everyone around the world that he is good enough. If he wants it, he’ll get it. He’s done it time and time again. I have no doubt he’ll do it in football.

“He’s got that winning mentality and you have to have that when you’re the best.

“He did the warm-up and passing drill with us, quite similar to what we did when he first trained. It was a light session. There’s still another five and a half weeks that he’ll be involved and we’ll see more.”

Anticipation is growing among Bolt’s teammates. They have had a look at his skills but are itching to see him in a game situation.

“He’s the fastest man in the world and probably will be for a very long time, so we’re curious to see if someone can play a ball over the top and see how quick he’s going to get to it,” Golec said.

Bolt has already been described as down to earth, humble and a guy that really doesn’t want to be the centre of attention, even if that is realistically not going to be possible for at least the next six weeks.

Mariners players joked on Tuesday that Bolt would still be involved in the club’s informal “fines” system, whereby light-hearted indiscretions result in a financial donation to a team kitty.

As it turns out, that might not be happening any more.

“As a joke we said we might put another two zeroes at the end of every fine just for him just to jack it up a bit,” Golec said. “He’s here on a trial, we’re not going to fine him for anything. We joke around with him but it’s Usain Bolt, what are you going to tell him?”

While Bolt won’t take part in a trial match this weekend against the Newcastle Jets, he is still in line to feature in another pre-season hit-out against a Central Coast select team next Friday. Already, 1500 tickets have been sold for the match.

“I don’t know the coaches’ plans but I presume he will have a go because he is trialling here for a contract,” Golec said. “I’m quite confident he’ll have a big role in that game. It’s still undecided where he will play. It’s still a bit early to get into the full swing of things. Over the next week he’ll start getting more involved and we’ll have more of an idea of where he is more comfortable playing.”