The Western Bulldogs went after their former teammate on Saturday night but the heavy treatment would ultimately fail for Higgins emerged as the match-winner in the second half in the Roos' thrilling two-point win. 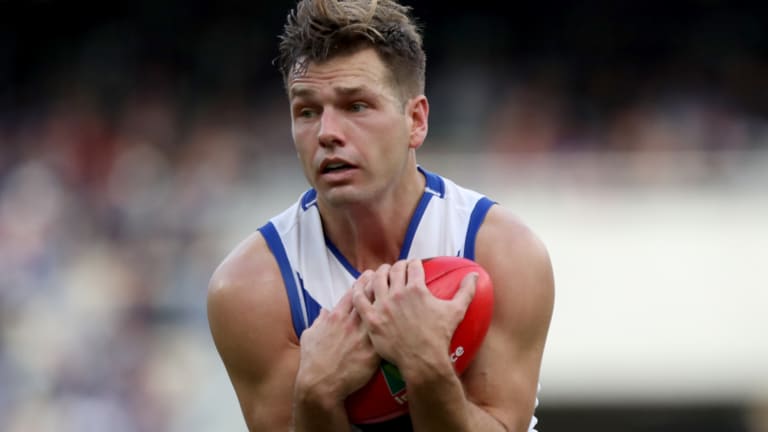 He would have 22 touches, six clearances and two goals after the main break, had critical possessions in what was to prove the game-winning play, and was involved in clashes with Tom Boyd and Billy Gowers.

He finished with a game-high 32 touches, including 17 contested, and is in All-Australian form, backing up after winning the club's best-and-fairest last year.

Goldstein, who had 42 hit outs on Saturday night, said the Roos needed to protect the silky ball winner as much as possible – an ethos that will continue against Essendon on Sunday.

"They go after Shaun most weeks now – there have been a number of times, there were a few off-the-ball incidents against Fremantle (in round 10)," he said.

"Obviously, the form that he has been in, you get that attention. He is ready for it. He goes about his footy in the right way. He doesn't retaliate, he just goes about it and plays his game.

"He is in career-best form and I would like to put his name up for All-Australian (selection) … we have got to support him as much as we can but we know that Shaun has got the character to keep fighting and not worry about it and not let it get into his head. No matter how much fighting they do to him, he still manages to keep going."

"He was outstanding. He gets tagged, he gets buffeted, he gets a lot of attention and just fights his way through it consistently," he said.

"He's certainly a premier midfielder in the competition, in my view. He's had a fantastic 2018 and was a big part of the difference (against the Dogs).

"He's grown as a person. I've said on a number of occasions he's a consummate professional – as good as I've seen – and he's as important off the field to us as he is on."

The Roos, having trailed at the opening three breaks, found a way to down the injury-depleted Dogs with 20 seconds remaining on the clock, when a Ben Brown toe poke found skipper Jack Ziebell, who snapped the clinching goal.

The Dogs had regained the lead with two minutes remaining, but a dozen late errors led to a heartbreaking defeat, one which prompted coach Luke Beveridge to give his team a bake behind closed doors.

"A lot more effort (goes into those plays) than the time it takes for the play to unfold, that's for sure," Scott said.

"We had, by the nature of some close losses last year, plenty of time to go back and analyse those losses and analyse what we could have done better defensively.

"On the flipside, if we're in this position where we're behind with less than a minute to go, what do we want to do and what are the priorities? But you can train that all you like – you still need to be able to execute it and we certainly don't train Ben Brown toe pokes and those sorts of things."

The Roos had five defeats by less than a goal last year, including two to the Bulldogs, making this win – which keeps them in the top eight – all the more sweeter.

"I can't say right now where it sits, but there are always games you look back on throughout the year and think, 'Well, gee, we weren't super in that particular game, but we just found a way to win'," Scott said.

"The Dogs were really good and they really challenged us. It's probably a good lead-in to next week's game (against Essendon), because they really move the ball quickly and look to challenge us off half-back."

Midfielder Billy Hartung has strained a hamstring while the Roos will continue to monitor tagger Ben Jacobs, who was a late withdrawal through concussion symptoms.

Jacobs was found to have had delayed concussion at training late in the week, with the club and player unsure of the original cause. The Roos had the bye last weekend.

"We can't pinpoint an exact incident that has happened but whether it's an accumulation of a number of knocks, or whether it was one significant incident earlier in the year, we are not sure," Scott said.