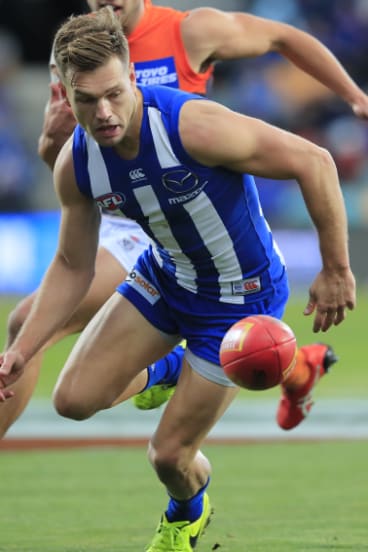 Belief is building at North Melbourne that the foundations for success are in place again just two years after the club undertook an aggressive reset.

Dual best-and-fairest winner Shaun Higgins told Fairfax Media the team now knew what they were capable of achieving after falling just short of finals in 2018 and were confident they could match any team in the competition next season.

"We are always optimistic but we are building a list now and we have shown enough that our football and our game plan and the way we go about it will stack up," Higgins said.

"It's just whether we can do that consistently enough now."

At the end of 2016 the Kangaroos called time on the careers of favourite sons Brent Harvey, Drew Petrie and Michael Firrito as well as respected recruit Nick Dal Santo, who had been a positive influence after arriving from St Kilda a year before Higgins moved from the Western Bulldogs.

"It was a bit of a transition period for us on field, but more so off-field," Higgins said.

The club had to reinforce the culture under a new generation of leaders Jack Ziebell, Higgins, Jamie Macmillan and Robbie Tarrant while fast-tracking the development of a younger group of players.

Higgins said work done in the past two seasons with players such as Jy Simpkin, Trent Dumont, Kayne Turner, Ben Brown, Ben McKay and Jed Anderson as well as the recruiting of players such as Jared Polec, Dom Tyson, Aaron Hall and Jasper Pittard put them in good shape to improve in 2019.

"We put ourselves in the mix last year but just fell short," Higgins said.

Always strong on the inside and with their scoring power strong, the club knows they need to be more consistent in executing defensive aspects of the game.

The Roos also working hard to improve their ball use off half-back after identifying it as a weakness, with Pittard and Hall looking to provide an immediate remedy.

Both of those players arrive with question marks over their capacity but Higgins, who has rejuvenated his career at North Melbourne in the past four years to the extent that he now sits alongside the game's best midfielders, says the club is very good at emphasising what recruits can bring to the team.

"I am probably in a fortunate position because I was one of them four years ago," Higgins said.

At North Melbourne he said coaches and teammates focused on maximising a player's strengths while addressing weaknesses as best they could.

"All those guys have got elite qualities in one way or another so we encourage them to show them and then we'll work on the other things," Higgins said.

Higgins says this approach was critical to his transformation as a player however he also says the work he did to get his mind right after injuries threatened to derail his career was crucial to his recent performance.

The turnaround began when he started working with Quality Mind's Richard Maloney in 2013 when he sidelined with a navicular injury and, in his own words, "at rock bottom".

Anxious and uncertain, he began to develop ways to free his mind of doubt, breaking the cycle of injury and helping him reach his potential. 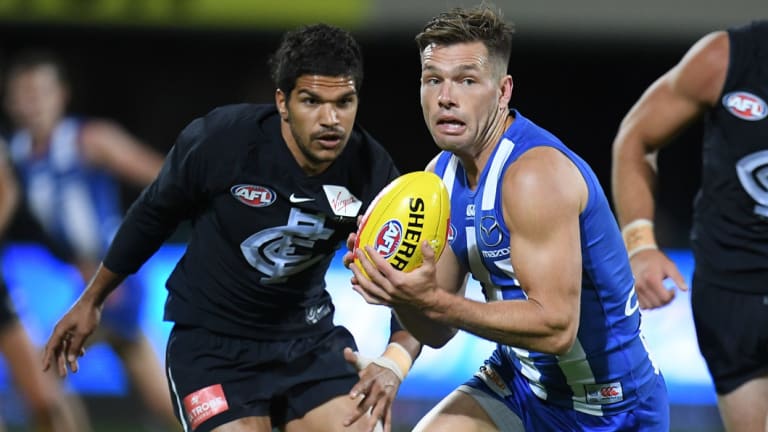 "It helped eliminate a lot of the beliefs I had about myself originally and, in layman's terms, stripped things right back so I could just go out and be clear and play," Higgins said.

Given he wondered midway through 2013 whether he could return successfully, Higgins' rejuvenation has been remarkable.

In the five seasons since 2014, Higgins has played 94 games, with a knee injury in 2016 the only significant interruption.

In a year he turned 30 he was All-Australian and polled 15 Brownlow votes, proving both explosive and classy enough to turn games in an instant.

"I needed something to snap me out of that and Quality Mind was the release point for that," Higgins said.

Now he is focused on maintaining his own standard while refining his mental approach, able to help teammates understand their own game; an empathetic, earthy character inside the club.

"Once you are doing the things you do really well it is then easier to do the other stuff," Higgins said.

"But when you are not encouraged to do what you do well you ask, 'Where do I fit in the scheme of things?'"