Hinkle Fieldhouse Is Still Ready for Its Closeup

INDIANAPOLIS — As fresh as Hinkle Fieldhouse may feel — nearly $50 million spent over the past decade has provided quite a face lift — ghosts of the basketball cathedral’s past remain to greet visitors. Names carved into a nearly century-old wooden ledge are still visible beneath slick navy paint. Wads and wads of gum, long ago petrified, are glued to the underside of the now-padded bleachers in the fieldhouse’s upper reaches.

Then there are the wooden benches where the tiny Hickory team sat in a musty locker room near the end of “Hoosiers,” the 1986 movie classic about an unlikely run to the Indiana high school basketball championship.

Hinkle — the home court for Butler University and the former site of the state’s famed high school tournament — is taking another star turn now, during the N.C.A.A. men’s tournament. Were it not for the coronavirus pandemic, which required the games to be played with reduced audiences and entirely in the state of Indiana, the tournament could not take place in this venue, which is long on basketball tradition but short on the seating capacity and amenities of a modern arena. 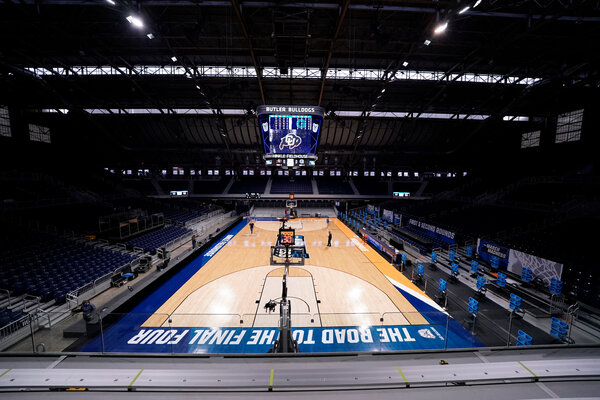 “When you’re a 19-year-old kid, you watch ‘Hoosiers,’ and you know the history of the building, and then you walk around the halls and read the walls, you’re part of something that’s bigger than yourself,” said Mitch Ballock, a senior at Creighton, recalling his first visit as a freshman. Ballock and his team beat Ohio on Monday night, and they will return to Hinkle to play top-ranked Gonzaga this Sunday.

Twenty-four teams played there through the first two rounds, some bathed in the sepia tones of late-afternoon light that streams through the windows. Four more games will be played in the round of 16 this weekend before the tournament moves on to its final stages at the cavernous Lucas Oil Stadium. The last time national tournament games were played at Hinkle was in 1940, when the entire event had just eight teams.

Making an entrance at Hinkle can be a transportive experience for a player, calling to mind the final scenes of the movie and thoughts of giants who crossed the same threshold.

Like John Wooden, as a teenager at Martinsville High. Or Oscar Robertson, whose Crispus Attucks Tigers became the first all-Black team to win an integrated state tournament. Or Larry Bird, who refused to enter a high school all-star game during garbage time because he felt stung by a lack of playing time.

Or the man who did the most to make the fieldhouse famous: Gene Hackman, who starred in “Hoosiers” as Norman Dale, a crusty coach in search of redemption years after his college career ended in disgrace. As a teenager, Hackman played high school basketball in Danville, Ill., just over the Indiana state line.

“Walking into Hinkle did bring back fond and significant feelings of my earlier days,” Hackman, 91, recalled in an email interview conducted through his publicist. “We — meaning the professional crew: director, production staff, myself — rehearsed for a day or so without an audience, so by the time the actual scenes were shot, we were accustomed to the space. But it was still somewhat overwhelming.”

Players this month might have a different experience: Hinkle is more intimate than the arenas they typically play in. And the movie now might be seen as overly sentimental — Baylor guard Jared Butler said he had turned it off because it was boring. But the red brick building carries a special resonance for those of a certain age, for those who grew up in this basketball-mad state and for anyone with an appreciation for the game’s history.

“Out of all the venues here, this would be everybody’s favorite,” said Michael Lewis, an assistant coach at U.C.L.A., which defeated Brigham Young at Hinkle in the first round and will play Alabama there on Sunday night. “When you walk through the doors, you can feel the history.”

Lewis might know the building as well as anybody in the tournament. He grew up in Jasper, Ind., and led the state in scoring as a senior. After playing at Indiana, Lewis coached at Butler for five seasons. He played in an exhibition at Hinkle, and also in summer pickup games beginning in college.

“Anybody who is anybody in the state of Indiana, you found a way to get onto Hinkle’s floor to play,” Lewis said.

Duke Werner, the trainer for Florida, which opened the tournament at Hinkle with a win over Virginia Tech, first came to fieldhouse as an 11-year-old in 1981, when the high school team in his hometown, Versailles, population roughly 2,000, reached the sectional tournament. He said it felt as if half the town had formed a caravan that followed the team buses on the 90-mile drive to Indianapolis.

“The guys on that team were your heroes growing up,” Werner said. “In a small town like that, it’s not just that you know them, you know everything about them. They were only 17-, 18-year-old kids, but you see them have that kind of success, they almost become bigger than life.”

The next time Werner set foot in Hinkle was in 2006, when Florida used it as a practice site for the Final Four in Indianapolis. As the players entered and put on their basketball shoes, Werner grabbed a ball and stepped right to the free-throw line.

“I was the first one on the floor that took a shot — just because of where we were,” he said.

Hinkle opened in 1928, financed by local business leaders who wanted a home for the state high school basketball tournament. With seating for 15,000, it was the largest basketball arena in the country, reflecting the popularity of the sport in Indiana. By 1972, the high school tournament had moved to bigger arenas. By 1998 the state had given up its single-division format, which made a legend of the 1954 champions from Milan High, a 161-student school whose team was the inspiration for “Hoosiers.”

In some ways, the changes have reflected the evolution of the sport and of basketball culture. When “Hoosiers” made its debut, college basketball was a regional sport. There was a Big East style of play (rough and rugged), a Pac-10 style (skilled and finesse) and a Big Ten style (shooting and defense). The movie, though it was from a bygone era, highlighted aspects of the game still prized in Indiana, where basketball hoops have long been put on street poles and on the sides of barns.

“Like they say, in 49 other states, it’s just basketball,” said Malachi Rice, an Indianapolis native and a senior guard at Georgia Tech, which lost its first-round game at Hinkle. “Stereotypical Indiana basketball is super conventional. By that, I mean the focus on the fundamentals — standard passing, dribbling drills, not focused on fancy things, like eurosteps. The other thing is shooting.”

One of the first places Rice — and his twin brother, Isaiah, who is at Vanderbilt — was exposed to those fundamentals was at a Butler basketball camp around the time the Bulldogs were appearing in back-to-back national championship games. Those runs — particularly the one in 2010, when Gordon Hayward’s half-court shot at the buzzer just missed winning the championship in Indianapolis — only tightened the bonds among the movie, the old arena and the college.

“Hoosiers” has been shown on the Hinkle scoreboard on the college’s movie nights, and it is a staple of summer basketball camps at Butler. “You don’t get an opt out on that if you’re a camper,” said Barry Collier, the university’s athletic director, who also played for and coached the basketball team.

Collier has been the custodian of the gym’s preservation. He first set foot in Hinkle during a recruiting visit in 1974, as a prospect from Florida. “When I walked in, my jaw dropped like an egg from a tall chicken,” Collier said. “I remembered pinching myself, thinking: ‘I could play here?’”

When he returned as athletic director in 2006, the arena’s bones were good, but a few nips and tucks were in order. The refurbishment included replacing many of the bleachers with seats (reducing capacity to 9,100), updating the locker rooms, restoring the original lights in the arched ceiling, putting in a new scoreboard with video screens, fortifying the mortar that held the bricks together, applying buckets upon buckets of navy blue paint and replacing the 8,000 window panes that can create an extraordinary effect for day games.

“They light up orange if the sunset is orange,” Collier said.

There was one such sunset last week, the low, winter sun bathing the arena in a warm glow. It was easy, then, to see the lure of nostalgia. To see why the building is a National Historic Landmark. Or why last year The Associated Press declared “Hoosiers” the best sports movie of all time.

That is a debatable point, no doubt, but even now scenes from the movie remain embedded in the minds of many basketball fans.

There is the quiet confidence of the star Jimmy Chitwood assuring his coach, “I’ll make it,” before the winning shot. Then there is the moment when the Hickory team arrives wide-eyed at Hinkle, and Hackman’s character pulls out a tape measure to remind his players that the rim of the hoop is 10 feet above the floor and the free-throw line is 15 feet from the basket — exactly like at their gym back home.

The point, Hackman said, was “to make the audience of the film understand the naïveté of the boys, their ineptitude and that the monstrous goal of the state championship was attainable.”

The scene’s message, Hackman said, could also have applied to the younger members of the cast, who had played basketball in high school and at small colleges but were novices as actors.

“Oddly and nicely, though, the inexperience of the boys as actors helped convey the first-time pressure of the players in that state championship,” he said.

It’s an experience that many players will understand this weekend, as they have throughout the tournament. The jitters, the climactic moments, and the exhilaration and devastation that are sure to follow — the ghosts that live in the old basketball barn know them well.