Essendon and winless Carlton might only have two victories between them after seven rounds so far this year, but Blues coach Brendon Bolton expects there to be "added spice" on Saturday when the fierce rivals meet again at the MCG.

The significance of the day will be amplified with Carlton celebrating the 50th anniversary of their thrilling 1968 premiership victory against Essendon, and the Bombers marking the 25th anniversary of the 1993 Baby Bombers' stunning grand final triumph against the Blues. 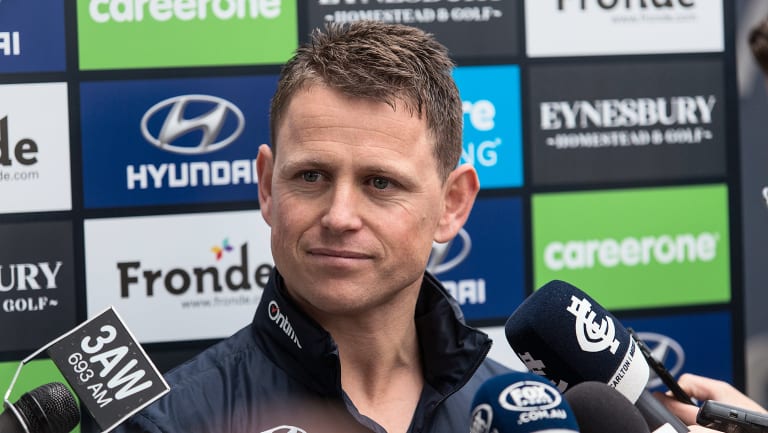 Carlton coach Brendon Bolton is drawing on his club’s historic rivalry with Essendon as the Blues attempt to notch their first win for the season.

"It's a rivalry game, we've had some good tussles in the last few years," Bolton said at Princes Park on Friday.

"History says that [the rivalry is extra special] and you respect it, understand it. There's a few reunions at the moment, that just adds a little bit to it and both teams I'm sure are really desperate for a win, so there'd be a little bit of added spice."

There's a school of thought that the hopelessly out-of-form Bombers are ripe for the picking and that Saturday presents the Blues with a golden opportunity to break through for their first win of the year.

Conditions are expected to be similar to round three last year when the Blues scored an upset win over the Bombers in wet conditions, and Bolton said his team relished that environment.

"We back ourselves in the wet, we think we play a strong method," he said.

"Teams that can adapt in the wet quickly usually get a result and I'm sure Essendon are prepared for that as well.

"Every week we feel we're a little bit better."

Helping Carlton's cause to end their worst start to a VFL/AFL season is the inclusion of talented young forward Charlie Curnow.

With Levi Casboult (ribs) out injured, Bolton believes Curnow and Harry McKay will give Carlton fans a glimpse of what the forward line will look like in the future.

Former Geelong speedster Darcy Lang also gets his first opportunity in Carlton colours after an injury-interrupted start to life as a Blue.

"We think we've got a forward-midfielder there that will be able to impact for us. 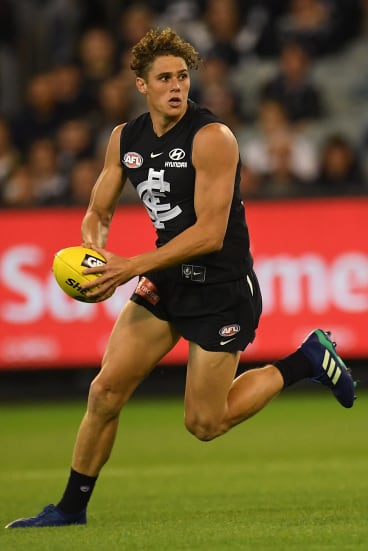 Talented Blues forward Charlie Curnow is back from injury.

"He's quite dynamic, so he can burst away from traffic."

After arriving at the club with big wraps, former GWS midfielder Matthew Kennedy finds himself on the outer after being dropped.

But Bolton was quick to stress that Kennedy's omission was purely part of his development as a player.

"There is some ups and downs and they've got to learn to grow and sometimes the VFL is part of that, so I don't think we need to look into it any more than that," Bolton said.

"Matt Kennedy's had a really interrupted pre-season with his shoulders, we knew he had an ankle injury, so he's just learning the craft really and we think at this stage that VFL is part of building his game."

In a further boost for the Blues on the injury front, Marc Murphy (foot) and Caleb Marchbank (ankle) trained on Thursday and are "pretty close" to returning to the senior side.

Meanwhile, Tom Williamson (back) could resume in the VFL as early as next week and David Cuningham (hamstring) will be available next week.