The Hockeyroos have beaten Russia 5-0 to qualify for the Olympics for an eleventh consecutive time.

The match was wrapped up in the first half with Mariah Williams scoring a brace and Grace Stewart, Sophie Taylor and Emily Chalker also grabbing goals in Perth. 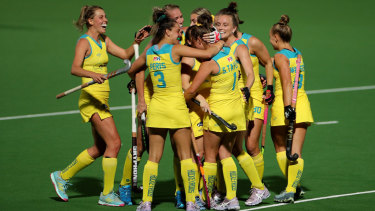 The Hockeyroos celebrate a Sophie Taylor goal en route to the win that qualified them for the Olympics.Credit:AAP

After their disappointment against New Zealand in the Oceania Cup, Australia were given a second chance on Saturday night by landing a spot in the Olympic qualifiers against Russia.

The Hockeyroos won the first game on Friday 4-2 and Saturday's victory gave them a 9-2 aggregate, earning high praise from coach Paul Gaudoin.

"I feel really happy for the girls," he told Hockey Australia.

"They worked really hard and it has been a massive year. We didn't quite get there [against New Zealand] in Rockhampton but now we can focus our preparations on Tokyo.

"From here we've got to make sure we're as prepared as we can be leading up to the Olympics.

"It was pleasing that we managed to finish off with some quality goals in the first half but our ball handling needs to get better as well as our fitness."

Williams added another in the 22nd minute before Taylor struck a low, hard shot into the net from inside the circle after Chalker had picked her out from a corner.

The provider then became scorer as Kalindi Commerford held up the ball inside the circle and rolled it across goal to an unmarked Chalker at the back post.

Williams piled on the misery when her searching shot beat defenders and rolled over the goalline right on half-time.

Russia were more steadfast in defence after the break and Hockeyroos keeper Ashlee Wells was even forced into a save in the final quarter.