Reece Hodge chalked up 29 points but it wasn’t enough as the Melbourne Rebels squandered a 14-point first-half lead and blew a golden opportunity to  seize a Super Rugby finals spot for the first time in the club’s history.

Despite not having Wallabies representatives Adam Coleman, Will Genia and Dane Haylett-Petty, the Rebels aimed up and certainly did not embarrass themselves but came up short 43-37 against the Highlanders in Dunedin. 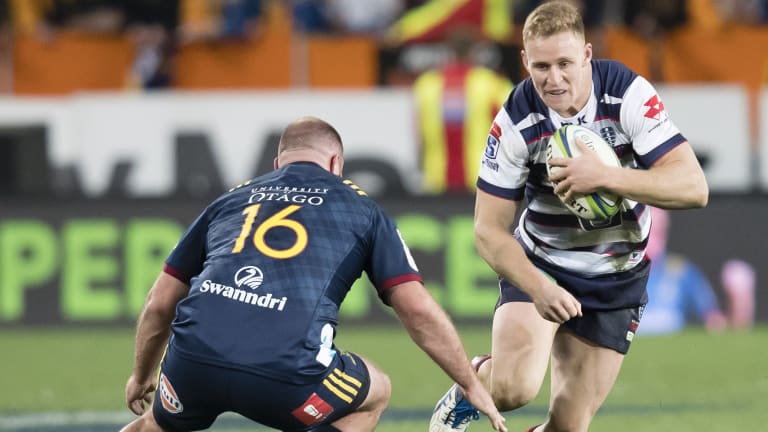 Pointscoring machine: Reece Hodge steps Greg Pleasants-Tate on his way to a 29-point haul against the Highlanders.

A win would have guaranteed the Rebels a quarter-final match next week but their capitulation, after also leading by 12 points in the second half, meant that other results would have to go their way for their season to stay alive.

“We just didn’t play footy for the full 80,” said Rebels captain Tom English. “We started well in the first half, there were a lot of positives and then we slipped away.

“We’ve got to be proud of the boys for that effort and that’s just footy. Sometimes you don’t win. We’ve got to be bigger and better if we get the chance.”

The Rebels only have themselves to blame. The fact they were unable to beat the NSW Waratahs, Queensland Reds and Highlanders after the June break indicates they simply don’t have the consistency of other teams that have already qualified for finals.

By the same token, their seven victories this season is the most ever in the club’s history and is a major improvement on the one they managed last year.

However, a penalty in the 80th minute to Jack Debreczeni reduced the margin to six points and ensured the Rebels picked up a bonus point. It ultimately spelled an end to the Brumbies' season even before they kicked off later that evening against the Waratahs.

Dave Wessels’ side will come away from Dunedin bitterly disappointed given they led for 67 minutes of the match.

The shining light was their No.10 in Hodge. He scored three tries to go with four conversions and two penalties in what was arguably his best ever Super Rugby game.

The Highlanders have now won six of their seven matches against the Rebels dating back to 2011, while the Australian franchise blew a chance to notch up back-to-back wins in New Zealand for the first time in the club’s history.

The six-point loss also immediately ruined any hope of an all-Australian quarter-final between the Waratahs and Rebels.

The Rebels were first to get on the scoreboard with a penalty in the third minute but the Highlanders levelled things up shortly after.

However, Amanaki Mafi ensured the local Dunedin crowd was silenced as he dived over from the back of a well-executed driving maul in the ninth minute.

The men from Melbourne extended that lead in the 18th when Hodge scored his fourth five-pointer of the season, down the left edge thanks to an assist from new fullback Jack Maddocks.

Their 17-3 lead looked a little less daunting for the Highlanders when Rebels halfback Michael Ruru was shown a yellow card for a trip on Lima Sopoaga.

As New Zealand teams do so often, they made the most of the numerical advantage. Waisake Naholo darted down the right wing and was too quick for Maddocks and Billy Meakes, then Kayne Hammington planted the ball down under the sticks in the 33rd minute to  draw his side level after Sopoaga’s conversion.

Just as the Highlanders looked like they would run away with a resounding victory, Hodge produced a classy intercept to get his side back in front.

Even though the Highlanders scored one of their own on the stroke of half-time, the Rebels would have been thrilled to go into the break ahead 24-22.

Hodge scored his third try of the evening with charge-down that he scooped up and put down under the black dot. A penalty put his men up 34-22 heading into the final 20 minutes.

Tevita Li kept the home side in the contest with a try in the corner that came about through pure strength, and when Sopoaga’s conversion went over, it put the Highlanders within five points.

With all the momentum, big Greg Pleasants-Tate then gave the Highlanders the lead for the first time as the Rebels struggled for breath in an energy-sapping period.