Cronulla ace Valentine Holmes has learnt so many key lessons from Queensland and Kangaroos teammate Billy Slater, but is happy to ruin his mate's fairytale farewell.

The fullback battle between 23-year-old Holmes and the retiring 35-year-old Slater will be one of the highlights of Friday night's preliminary final at a packed AAMI Park. 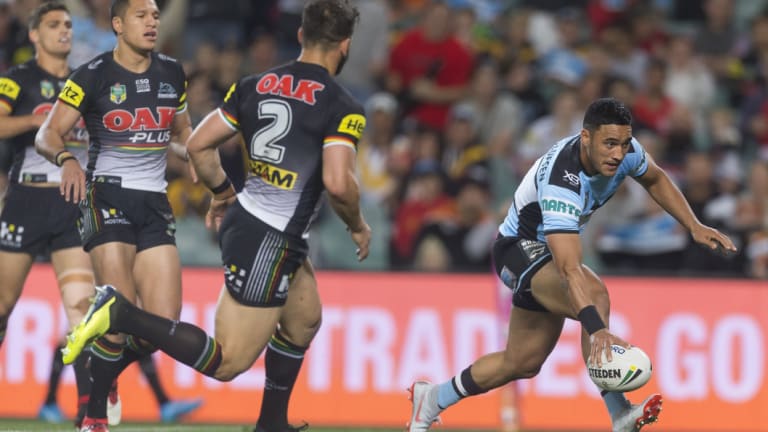 Hot streak: Valentine Holmes scores after Sosaia Feki had hit the ball back against the Panthers at Allianz Stadium.

Holmes' form has been so impressive in the back half of the season that he has earned comparisons with Slater.

"Obviously, they'll come out hard and try and send out Billy the way he deserves,'' Holmes said of the Storm clash.

"He's had a marvellous career – he's won three or four grand finals, World Cups, Dally Ms, Origins. He would be cut if he's not in the grand final, but happy with the career he's had.

"I've idolised Billy since I was a kid. He's from up north as well, where I'm from, and it's been pretty cool to play alongside him. I've learned a lot from him.

"But we've got 'Lewie' [Luke Lewis] retiring so we have to think about guys like him and sending him out the way he deserves as well.''

Holmes allowed a Tyrone Peachey grubber to roll before Nathan Cleary snuck under his guard and scored a try to spark the Penrith fightback on Friday night. But with the scores locked at 20-all and the Panthers on the prowl, Holmes opted for a short kick-off and regathered the ball. It was one of the plays of the semi-final.

"I didn't tell anyone,'' said Holmes, who looked happy with himself about the 69th-minute play.

"I felt like if we were just kicking off to them, they had a good roll on and it was a time we needed the ball back. I noticed their two front men were wide apart, so I backed myself and luckily enough I got the ball back.''

If Cronulla are to cause a boilover in Melbourne, Holmes will need to fire. He bagged another try on Friday night to take his tally to a club-record 22 for the season and is one of the favourites for the Dally M.

Sharks coach Shane Flanagan is not only grateful to have Holmes at his disposal, but hopes the deeper Cronulla go in the title race, the harder it will be for the youngster to leave the club and join North Queensland.

"All those type of things make it harder for him to turn up his nose and walk away from it," Flanagan told Fairfax Media last week. "He'll be one of the greatest players the club has had.''

Holmes, however, did little to suggest he was about to hang around for the long haul. And even the Sharks would privately accept Holmes is from Townsville, the Cowboys have $1 million a season to throw at him and Michael Morgan is one of his best friends. 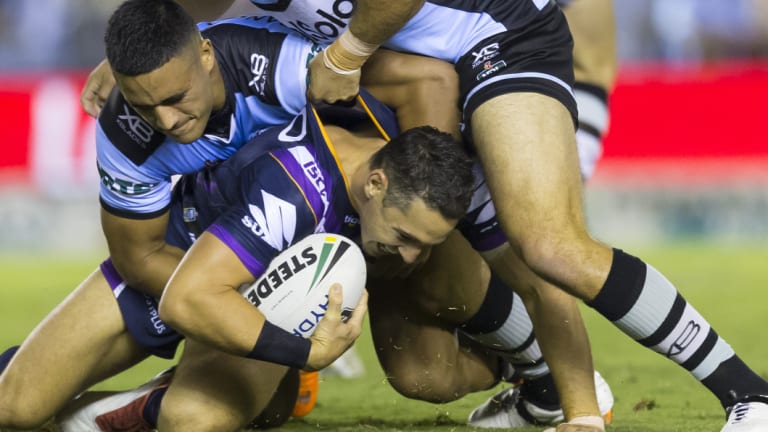 ''Obviously, I still have another year on my contract,'' Holmes said. "I'm not too worried about my future at the moment. I'm still secure next year and still have a job.

"I'm happy with where we are now, we're still in the comp and a chance to play in the big dance. I think it will be a game like Friday night and go down to the last second.''

Penrith nearly toppled Cronulla, but caretaker coach Cameron Ciraldo was still happy to back them to continue their impressive record against the premiers.