Jason Behrendorff can still remember his heart racing when he took the new ball, looked towards the pitch and saw Brendon McCullum staring back at him.

McCullum would go on to score a century that day. While the teenage ACT Comets didn't claim McCullum's scalp, he walked away with a respectable 0-21 from eight overs – enough to think he could one day mix it with the best. 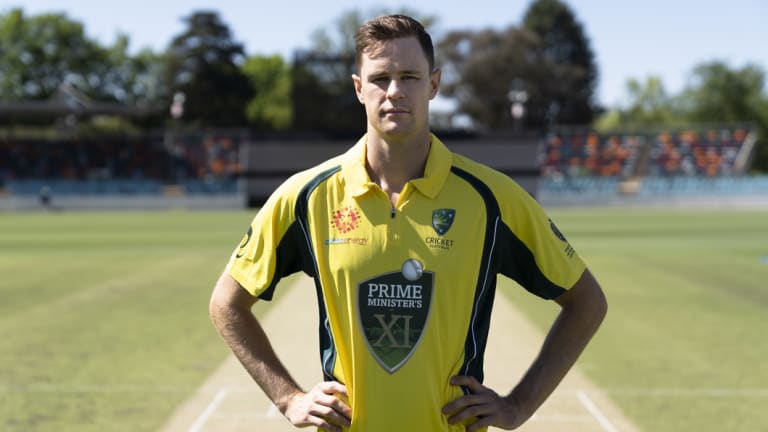 Jason Behrendorff has come a long way since his ACT Comets days.Credit:Lawrence Atkin

Almost 10 years since Canberra product Behrendorff made his Prime Minister's XI debut, he is back for his fourth stint – this time against South Africa at Manuka Oval on Wednesday.

This time he is far removed from being a teenage quick plying his trade for Tuggeranong or the ACT. He is an Australian-capped fast bowler with a point to prove.

But two things never change when Behrendorff meets an international opponent – the nerves and excitement are still there, just as they were for a wiry teen bowling to one of the world's most destructive batsmen.

"I remember being very nervous [in 2009], that’s when I was still playing cricket in Canberra and it was a great opportunity to play," Behrendorff said.

"We played against New Zealand, and I still remember opening the bowling against Brendon McCullum. That was one of the tough tasks I was set with for the day. It was an amazing game.

"Justin Langer was the captain in that game and I fondly remember chatting with JL at the end of the game. I had only recently read his book at the time so it was quite interesting to actually meet him, chat to him and get to know him."

Behrendorff would soon earn a contract with Western Australia and the Perth Scorchers, eventually opening the door for him to play under former Australian opener Langer.

Langer says there is no cricketer in Australia more professional than Behrendorff, a rousing endorsement which speaks volumes about the 28-year-old's ability to battle back from countless injury woes.

Behrendorff has zoned in on limited overs cricket this season, and putting a line through his first class summer has been a double-edged sword. 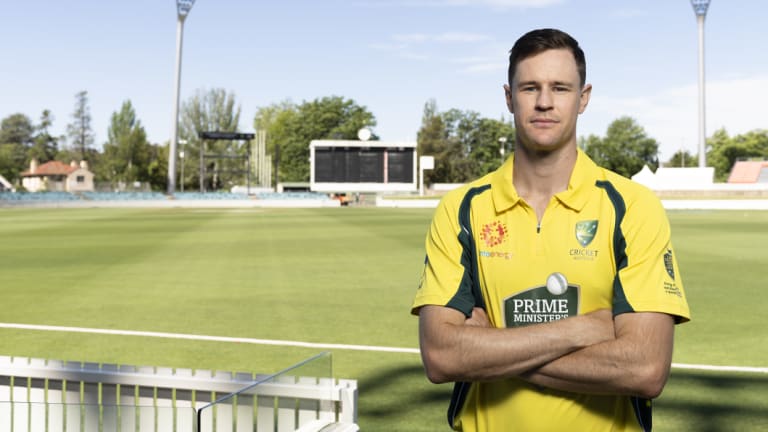 Jason Behrendorff has an eye on an Australian return.Credit:Lawrence Atkin

Disappointed he can't play Sheffield Shield, sure. But it couldn't have come at a better time after Behrendorff and wife Juvelle welcomed son Harrison into the world earlier this year.

"My wife and little man came over here, they’re staying with mum and dad, and mum and dad are loving it," Behrendorff said.

"They’re spending a lot of time with him. He’s at the stage now where he is quite interactive and smiley, and rolling around on the mat. They’re having a good time playing with him."

Little Harrison quickly found his way into an Essendon jumper, and Behrendorff is still dreaming of giving him a baggy green to go with it.

A back fracture that will never fully heal leaves him prone to flare-ups associated with scar tissue, hence the decision to put his Sheffield Shield campaign on ice before it began this season in the hope he can play consistent cricket.

What Behrendorff has shown across all formats in the past suggests his failure to piece full seasons together may well be the only thing stopping him from pulling on a baggy green or the canary yellow.

"It’s something that has been set out for my plan for a little while, to give me a chance to get some continuity playing cricket," Behrendorff said.

"Not that we’ve rushed back before, but to not feel like we have to push the envelope all the time to give myself a chance and my body a chance to adapt, settle and play some cricket.

"The opportunity I’ve had so far has been in the Twenty20 format for Australia, and short format cricket is the way my summer is looking at the moment.

"If I continue to perform well and do those things for WA, Prime Minister’s XI and the Scorchers, then you never know what opportunities might come up. It’s on me to stay fit and play well, and hopefully the opportunities will come from that."