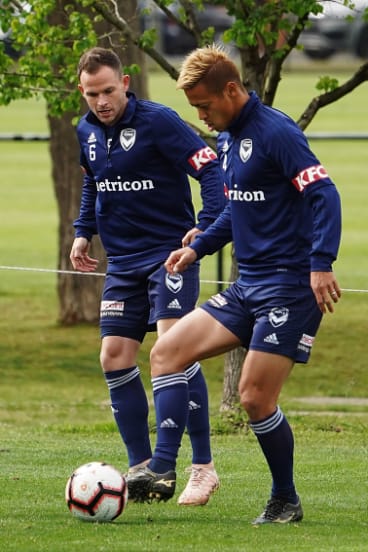 Melbourne Victory star Keisuke Honda has been cleared to start in his side's A-League clash with Perth Glory after this week's training mishap.

The marquee man crashed to the turf after he suffered a knock to a knee at Gosch's Paddock on Friday and was taken back to the change rooms on a motorised cart.

But coach Kevin Muscat dismissed concerns over the 32-year-old midfielder's health ahead of Sunday's encounter at AAMI Park.

"He's fine … it was training and it can happen multiple times during the week [but the media] were here to see this one," Muscat told reporters on Saturday.

"He landed awkwardly, it was just an innocuous knock. He'll be fine to play."

Muscat added Honda will make his second start, having scored on debut.

But fans will need to wait at least another week to see Swedish World Cup striker Ola Toivonen in action in a Victory shirt for the first time.

"He's been carrying a little bit of soreness low down in his calf which we've been treating," Muscat said.

"We just haven't been able to get enough work into him.

"But with the length of the season and the amount of games we've got towards the back end … we're not going to take any risks or rush [him]."

Victory will be looking to claim their first points of the campaign after their controversial 2-1 defeat at the hands of cross-town rivals Melbourne City in the season-opener.

Perth started their campaign, and the Tony Popovic era, with a 1-1 home draw against Western Sydney.

The new coach is wary of the wounded reigning A-League champions.

"Just like we want to get our first win, I'm sure at home they'll want to get off the mark after a disappointing result in the derby," Popovic said.

"But we showed good signs [against the Wanderers], in particular in the first half.

"Overall it was quite pleasing for the first game."

Perth will again be without Spanish star Diego Castro, who continues to recover from a hamstring injury.