John Hopoate will return to the football field just months after receiving a 10-year ban from rugby league.

Hopoate has been named as part of Manly’s team for the Legends of League tournament at Central Coast Stadium on November 17. The NRL and the NSWRL have no jurisdiction over the event, meaning the bodies are powerless to prevent Hopoate from participating.

Hopoate copped a decade-long ban (five years suspended) over a fight he was involved in during an A-grade match in July. The 44-year-old pleaded guilty to three counts of contrary conduct and one of striking while playing for Narraweena against Forestville at a NSWRL conduct review hearing. The controversial winger claimed his behaviour was sparked by racial taunts from the opposition but his past indiscretions – including 45 weeks of NRL suspensions – were taken into account when his punishment was handed down. 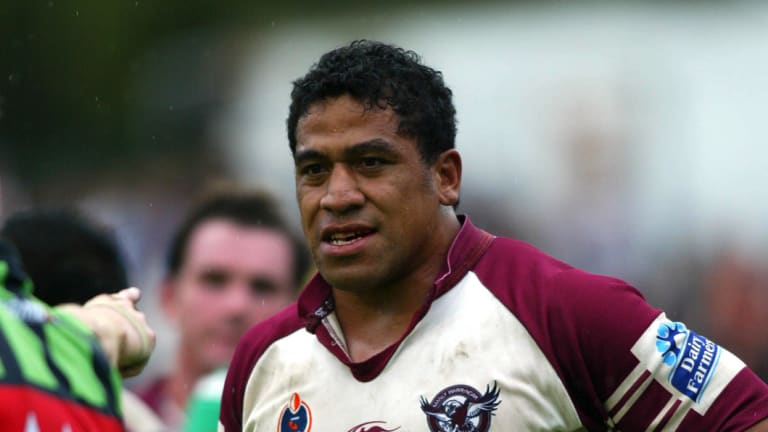 The Legends tournament is supported by the NSW Government and has a charity component. It raised $20,000 for the Mark Hughes Foundation in its inaugural season last year and organisers are hoping to exceed that mark in its second running.

Legends of League managing director Matthew Hill said Hopoate’s presence was a boost to the event.

“He’s a colourful character and whether people love or hate him, he’s doing it for charity,” Hill said.

“He’s happy to put the boots on and take all the flak to play in our tournament.

“I think that speaks volumes of the guy. If you get to know him on a personal level, rather than the John Hopoate who has had brain snaps over the period of his career, he is a lovely fella.

“He’s a family man and he’s happy to boot the boots on to take all that fan love or abuse for charity to play for Manly with his old teammates.”

Hopoate will join a host of former Sea Eagles including Steve Menzies, Cliff Lyons, Solomon Haumono, George Rose and Mark Bryant in a Manly side vying for over $105,000 in prizemoney against Parramatta, Brisbane, Canterbury and a Barbarians side.

“Whether people love or hate him, whether you think he’s a villain or a hero, he is a drawcard for rugby league fans,” Hill said.

“The players want to connect with their former rivals and teammates, that’s what they love the most. That’s why we have so many big names.”

Hopoate had hoped to play a role with the Tongan national side as they prepare to take on Australia at a sold-out Mt Smart Stadium on Saturday. His suspension precludes him from being involved in any official capacity but the footballer-cum-boxer has been spotted on several occasions with the side while wearing Tongan colours.

Meanwhile, Manly young gun Manase Fainu will need to sit out the opening game of the 2019 NRL season after filming a sex act without consent. The hooker escaped conviction and received a good behaviour bond after pleading guilty in Fairfield Local Court in September. The NRL imposed a ban of two international matches – the New Zealand Juniors and Samoan team clashes – as well as one further competition game next season.