Manchester City winger Raheem Sterling apologised to Hungarian referee Viktor Kassai after winning a comical penalty that was clearly not a foul in Wednesday's 6-0 Champions League win over Shakhtar Donetsk.

With City 1-0 up in the first half, Sterling burst into the area and tripped over as he tried to dig his foot under the ball to chip Donetsk keeper Andriy Pyatov.

There was no player challenging him, let alone any contact, yet the experienced Kassai pointed to the spot. City took the gift as Jesus scored from the spot.

"I went to chip the ball and don't know what happened. I didn't feel contact. I scuffed the ball. Apologies to the ref," Sterling said after the game.

Shakhtar's Portuguese coach Paulo Fonseca laughed when he was asked about the decision.

"It is difficult to speak about a penalty after a result like that – but it's ridiculous, that’s all I can say," he said.

"Everyone saw it, but it is not because of the penalty we lost the game," he added.

City manager Pep Guardiola agreed that the referee had got it badly wrong and said the incident highlighted the need for the video assistant referee (VAR) system to be introduced. 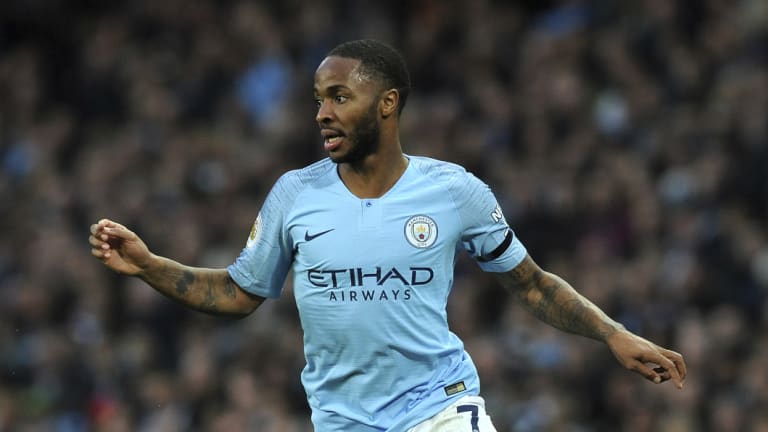 Manchester City’s Raheem Sterling apologised to the referee after the match.Credit:AP

"We realised it wasn't a penalty. We don't like to score in that situation," said Guardiola, who conceded Sterling could have told the referee at the time.

"You know VAR and what it is – the referee must be helped because they don't want to make mistakes.

"The game is so quick, so fast these days. It would take 10 seconds for somebody to say something to the referee," he added.

Social media lit up after the penalty was given.

City had two further penalty appeals turned down as Sterling and David Silva went down under challenges but Kassai had no alternative other than to point to the spot again 18 minutes from time.

Shakhtar had a right to feel aggrieved but they were otherwise outplayed for a second time in two weeks by City, who made victory certain through Sterling, Riyad Mahrez and two more Jesus strikes.

Silva was clearly felled by Taras Stepanenko and Jesus fired into the top corner.

The result at the Etihad Stadium ensures City go into this weekend's derby against Manchester United in good heart, with the bonus of having rested Sergio Aguero, Leroy Sane, Benjamin Mendy and Vincent Kompany.