How Do You Know Tiger Woods Is Coming? Listen for the Roar

The cheering was already raucous as Tiger Woods walked up the 18th fairway on Saturday, but when he smiled and tipped his cap, the volume doubled. The clamor diminished ever so slightly, and then Woods raised his putter in salute, and the roar reached new heights. A few strides later, Woods was on the green, and he offered a wave of his right hand and another grin. This time, the crowd erupted with its most thunderous ovation.

It was hard to tell who was having more fun: the crowd as it shouted its welcome back or a playful Woods as he relished the sounds.

But in the warmth of a spring Saturday evening, the throng around the 18th green did not want to let Woods go. He began to exit, but a last full-throated hurrah from the crowd caused Woods to turn back briefly — as if he wanted to save a mental image of the scene.

Then, finally, he began the walk up the hill toward the clubhouse locker room.

Still, fans surged anew to be near him, lining up 10 deep along the narrow path protected by ropes and security officials. Their voices followed and enveloped Woods like a cascading wave, cresting the rise as he did, and then flowing back down the other side of the knoll until Woods ducked his head inside a small white door and disappeared.

Even without Woods to fete in person, the fans, some of them gleefully facing one another, continued to shout and cheer. It was as if they were celebrating their own good fortune. 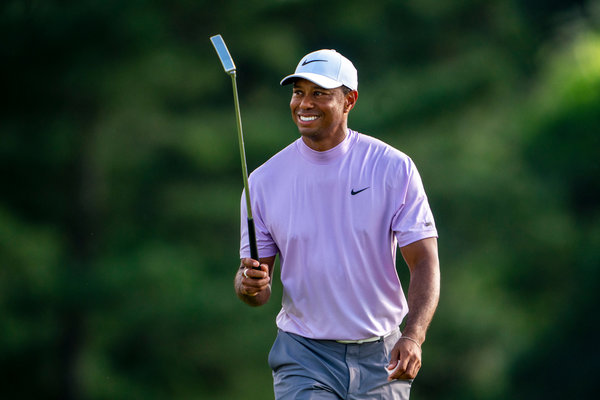 Tiger Woods, at 11 under for the tournament, was two strokes off the lead at the Masters with 18 holes to go. It was no time for quiet.

“It was a good day for everybody,” he said with a laugh. “It’s been a while since I’ve been in contention here. Tomorrow will be interesting.”

Compared to most of the field, who generally attacked a rain-softened golf course and surged up the leaderboard in the early going on Saturday, Woods was the slow starter in the third round. His fans shadowed him from shot to shot, but they were subdued, especially after Woods bogeyed the fifth hole and dropped several strokes behind Tony Finau, who also finished Saturday at 11 under.

On the walk from the fifth green to the sixth tee, Woods talked to himself. He saw the low scores on the leaderboard. After his round, he noted that even some of the amateurs in the field were four or five under for the day.

That got his attention.

But instead of becoming overly aggressive, he remembered where he was. This was Augusta National, which rarely rewards the brash.

He said to himself, “Just be patient; let the round build.”

His tee shot to the par-3 sixth green stopped 12 feet from the hole, and Woods curled in the tricky downhill birdie putt with a deft left-to-right break. Another birdie followed on the seventh hole, and at the par-5 eighth, his second shot stopped 11 feet from the hole. His eagle attempt skidded just past it.

Woods was now eight under par for the tournament and a stroke off the lead. The galleries stalked him into Amen Corner, where he laid up before Rae’s Creek but pitched to 6 feet and made that birdie putt, too.

The par 5s have always been where Woods has won and lost Masters championships. The 13th hole is his favorite, and in 22 Masters appearances, he is 52 under par there. The next most generous hole for Woods has been the par-5 15th. On Saturday, it was at there that his round went from promising to memorable.

His second shot bounded over the green, but Woods later said that was a calculation, not a mistake.

“If you’re going to miss, that’s the place to miss,” he said. “I practice from that spot quite a bit in practice rounds. It was a simple chip.”

Perhaps, but from just off the green, Woods had to deftly pitch his ball up a mound in the middle of the green and then let it trundle toward the front — with the right speed. But that’s what he did. When he converted the 18-inch birdie putt, Woods was briefly tied for the lead with Molinari.

The viewing spaces were packed at the par-3 16th when Woods, after an extended wait on the tee as he took eight practice swings, lofted a tee shot that bounced just left of the flagstick and skipped to a stop 5 feet away.

“I took a little time but got the right wind there at 16 and hit it right where I wanted,” Woods said later.

It produced his final birdie of the day and another ovation that would not be his last.

And then he was walking across the 18th green, playing to a euphoric crowd that wanted more, and knew there was more to come.