Italian legend Del Piero played two seasons for Sydney FC, scoring 24 goals, while Cahill scored 11 in one and a bit with City.

Cahill left in the second year of a three-year deal because he wasn't getting enough game time. City coach Warren Joyce didn't rate him. Cahill's marquee stint was a failure despite scoring in City's FFA Cup win. He didn't bring them closer to a maiden A-League title.

Sydney missed the finals in Del Piero's first season and were knocked out in an elimination final in his second. Del Piero, and to a lesser extent Cahill, boosted crowds, interest and television audiences but their stints provided the league and their clubs with no lasting impact.

Honda will be different. His performance in Victory’s controversial 2-1 loss to City in Saturday night’s Melbourne Derby proves that. He'll be pivotal as Victory contend for back-to-back A-League crowns.

The 32-year-old Japanese star scored on debut – a commanding header coming off the back of a smart run into the box – and he was involved in a neat bit of build up play. 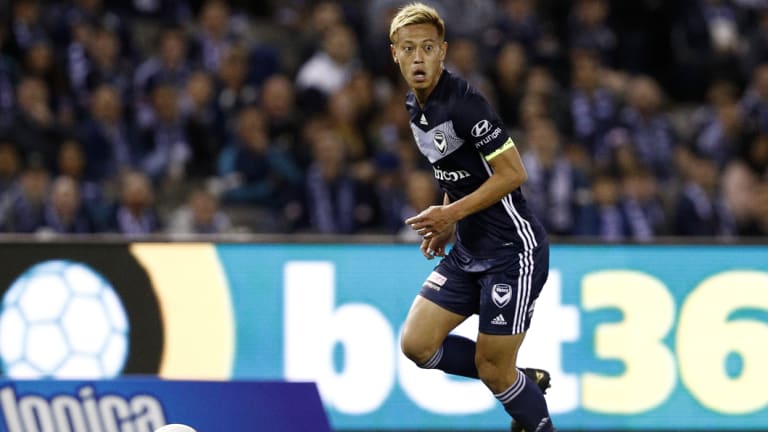 Above and beyond that goal Honda was up to his ears in every bit of Victory's meaningful attacking play. He ran at City's defence and played Kosta Barbarouses through on goal in the second half and soon after knocked a perfectly weighted pass to James Troisi, which allowed the former Socceroos attacker to hit the post with a curling shot.

Honda's set pieces were dangerous, his link-up with Storm Roux on the right made the New Zealander a better player and importantly his defensive workrate was very good. That's something Cahill, and in particular Del Piero lacked – the latter was a defensive liability at Sydney.

Yes, Honda lost Riley McGree during his run to score the winner, but that was due to a concentration lapse rather than a physical flaw. Coach Kevin Muscat also noted post-match that Victory's collective defensive unit broke down in transition for that goal.

Instead of their usual 4-3-3, Victory played a new 4-1-3-2 system on Saturday. It appears the change has been made to cater for Honda, who isn't suited to playing as a winger. Barbarouses played as a striker alongside Kenny Athiu. Victory have traditionally played with a solitary striker in recent seasons (Besart Berisha) and wingers like Barbarouses and Leroy George. 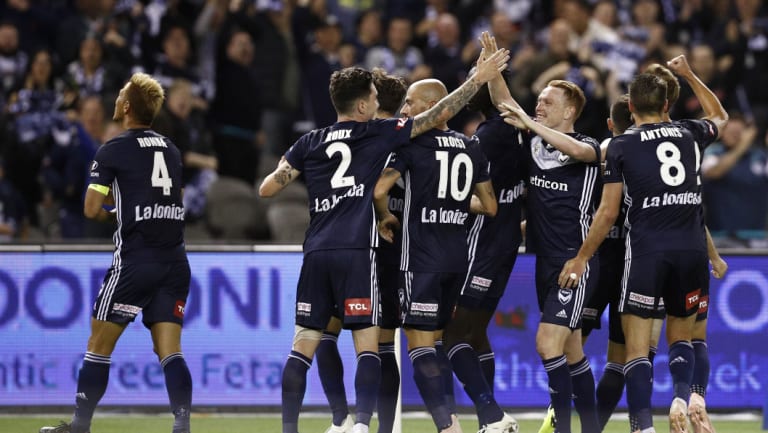 Honda and Victory celebrate after the Japanese star scored the opening goal. Credit:AAP

Honda and Terry Antonis played not as wingers but as right and left attacking midfielders that pushed back hard to defend alongside Spaniard Raul Baena who screened the back four. It's a tough role but Honda was up to it. Baena also impressed with his passing and ability to turn out of trouble.

Wing backs Corey Brown and Roux provided width, as did Barbarouses and at times James Troisi, who started as an advanced central midfielder.

Muscat noted after the game that Honda's preferred position is as a right-sided advanced midfielder, and not centrally as a Japanese journalist suggested to him. That position hasn't featured in Victory line-ups under Muscat until Saturday night, so it seems the system has been changed to suit the former AC Milan and CSKA Moscow player.

Victory lost due to a referee error but played well, as did City, and a draw would have been the right result. Both sides will improve and get players back this week and on paper should challenge for the title.