MIAMI GARDENS, Fla. — Let’s consider for a moment what could have been.

A prizefight of a college football game, with the No. 1 ranked offense (Oklahoma) slugging it out with the No. 2 offense (Alabama) nearly score for score in the College Football Playoff semifinal that would send the winner to the national championship on Jan. 7.

That was true of the second half of the Orange Bowl on Saturday, played at Hard Rock Stadium, in which Oklahoma outscored Alabama 24-14.

But that’s not what the scoreboard said at the end. It read 45-34 in Alabama’s favor, sending the Tide rolling to the national championship game for the fourth consecutive season, this time against Clemson in a rematch of the 2017 title match Alabama lost to the Tigers.

But, oh, to replay that second half and realize Oklahoma in fact has something of a winning formula good enough to go toe-to-toe with Alabama, if only it could get a head of steam from the start. What that final scoreboard doesn’t tell you is that Alabama led, 28-0, in the first half.

Anybody who tuned out the game at halftime, when Alabama held a 31-10 lead and it looked like another chapter of the Crimson Tide’s inevitability and invincibility was getting drafted early, missed the real Oklahoma.

Alabama coach Nick Saban knew it was lurking. He threw down his headset in frustration when Alabama settled for a field goal late in the second quarter, stymied by penalties.

The gesture seemed over the top, a perfectionist coach frustrated he could not run the score up on a weaker team. But, even if the game plan allowed for slowing the pace with a commanding lead, all along going into the game Saban had warned of Oklahoma’s arsenal and knack for close wins.

“We had a great drive there,” he said at the half. “We took six minutes off the clock but we didn’t finish.”

At halftime, Oklahoma coach Lincoln Riley exhorted his players to do what they had done in those several close games, fight and not accept the inevitable.

“We’ve been fighting all year,” said Oklahoma receiver Marquise Brown, who was hobbled by a pulled muscle in his left foot. “Our record doesn’t say all the games that we fought. A win is a win and we had a lot of tough victories. That’s what our team is built around, fighting to the end and fighting through adversary.” 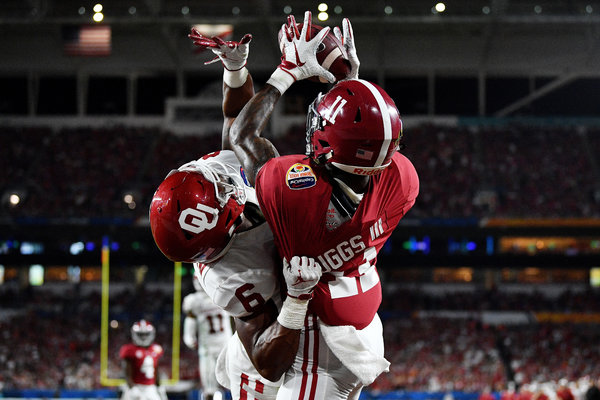 It is also built around the winner of the Heisman Trophy, Kyler Murray, at quarterback.

“Kyler Murray is really fast, so chasing him down was a battle,” said Dylan Moses, an Alabama linebacker.

Still, even Murray knew the lackluster start was a crippling blow against a team like Alabama.

“We started off too slow and they are a good team,” he said. “We outplayed them the rest of the game, but you can’t go down 21-0” — the score at the end of the first quarter — “against teams like that.”

Oklahoma goes home with a lot of questions.

Murray, a junior, has signed a contract to play baseball with the Oakland A’s but he also has not ruled out the possibility of playing in the N.F.L. Riley’s name pops up for the N.F.L. head coaching jobs likely to open up next week in the annual season-ending round of firings.

And the Sooners almost certainly will take stock of their defense, which ranked among the bottom of the 130 top-level teams in college football. Its potent offense always made up for it — except when it didn’t, like on nights like Saturday.

That raised the prospect that, as in the N.B.A. and the N.F.L., the balance of power is shifting to offense-heavy teams. That may be true in general but not particularly when you are going up against Saban, whose defense and offense are both top-ranked.

“When you’re playing against an explosive offensive team who can score very quickly, all parts of your team, special teams, offense, defense, everybody has got to continue to play well in the game,” Saban said, adding, “It was no surprise to me at all that they were able to make some plays that got them back in the game.”

Still, how long can Oklahoma tolerate being a bridesmaid?

It has now had back-to-back Heisman winners (Baker Mayfield, now on the Cleveland Browns, won in 2017), has won or played in the Big 12 Conference championship game almost every year since 2000, and has been in the College Football Playoff three of the last four years.

While several of his players and members of their families wept in frustration in and outside the locker room, Riley tried to remain upbeat and bent on assuring the national championship trophy was almost in their grasp.

“We’ve still got a bunch of Big 12 trophies,” he said. “We’re going to hold that tall skinny one here in a couple years and we’re going to hold it in a large part because of the fight from these seniors in this program, all the players, the staff.”

“We’ve had some really good teams here the last four years,” he added, “but I don’t know that we’ve ever had a team, and I just told them that in the locker room, that has had the fight in them that this team has, and that’s going to do wonders for our program. That’s going to make us a better program.”

Players, though, dwelled on the sting of the now.

“I wanted to win a national championship,” Murray said, with the pain of the loss etched on his face. “And I just fell short.”