Cronulla star Valentine Holmes has revealed the lessons he learned during his NFL trial are helping him become a better fullback.

Holmes could become the last custodian to mark up on Billy Slater if the Sharks eliminate Melbourne in Friday night’s preliminary final. Slater will call time on his stellar career at the conclusion of the current Storm campaign in a move that will soon result in him qualifying for Immortal status. 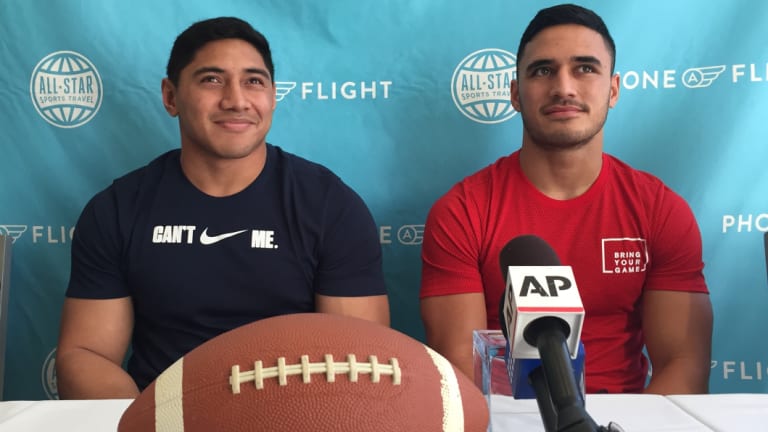 Different ball game: Jason Taumalolo and Valentine Holmes in Santa Monica, California discussing their prospects of scoring contracts in the NFL back in in November 2016.

Holmes is among the contenders to become Slater’s long-term replacement at international level and he can make a strong push for the Australian No.1 jersey if he gets the better of his former Maroons teammate.

Holmes and Cowboys star Jason Taumalolo participated in NFL trials in Los Angeles with a view to making a Jarryd Hayne-style transition to the code. While attracting some interest from scouts, the pair subsequently re-signed with their respective NRL clubs and have cemented their status as bona fide rugby league stars.

Holmes said he has applied some of the lessons from his US experience to make him a better fullback.

“With the drills, if you do the slightest thing wrong, you’re in trouble or you’re dropped.

“They’re very strict over there and it makes you perfect. It makes you a better player.

“I enjoyed my time doing that with Jase. It’s probably the most nervous I’ve ever been, doing those trials and training runs.

“It’s an exciting sport, I love watching it. A lot of the boys are in fantasy [football] together and we always watch it early on Monday mornings.

Holmes has shelved any thoughts of further NFL trials to concentrate solely on his league career. However, his American sojourn coincided with his desire to transition from wing to fullback and he was working harder than ever to make it a successful one.

“I’ve been working on my passing with all the outside backs, we do extra after training sessions,” he said.

“Last year I wasn’t doing that, I’d just do the normal session and be finished. All the extra stuff has been helping me. 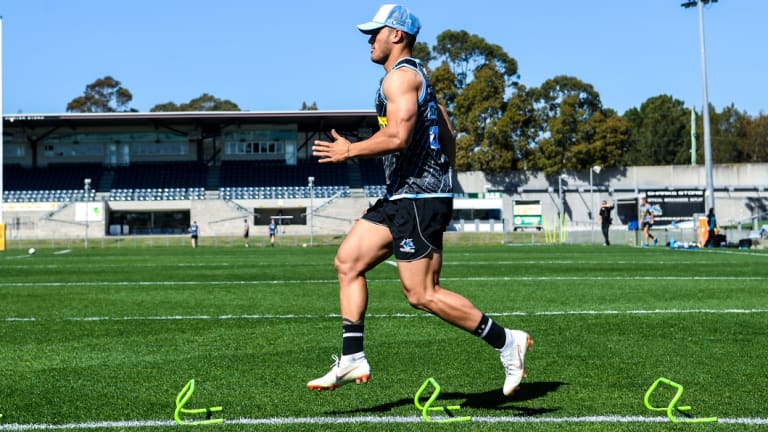 “Obviously with Moyza and Duges at the club, it’s put pressure on me and made me want to play better. The experience of those two, having played fullback in the past, I’ve learned a lot from them. It’s been a good learning year for me.”

Another person Holmes has learned from is Slater. The pair have spent time together in recent Maroons and Kangaroos camps and Holmes said Slater generously shared his knowledge on fullback play.

“I pinch myself, being so close that you get to train alongside someone like him,” he said.

“There was a time when I asked him about a part of his defence – why he did certain things because other fullbacks did it different to him – and he told me his reasons.

“He was always willing to help out me, Gags [Dane Gagai] or anyone who would ask for tips. He would help everyone.”

Holmes said he was hopeful of being considered for the Australian No.1 jersey for the season-ending Tests against New Zealand or Tonga. Roosters star James Tedesco is his biggest rival after Manly's Tom Trbojevic was ruled out with a facial injury.

“It’s always going to be a goal of mine,” Holmes said.

“It’s the goal of every fullback of all the other 15 clubs to put on the green and gold jersey in the position they play.

“That is something I want to pursue.”