SURPRISE, Ariz. — After the Kansas City Royals departed for a spring training road game last month, their general manager, Dayton Moore, stayed behind at the team’s training complex to watch prospects on the back fields. It was from there, more than a decade ago, that a longtime coach, Bill Fischer, had called him excitedly to share a vision.

“Fish said, ‘I just saw the Latin version of Johnny Bench,’” Moore said, sitting in a dugout and smiling at the memory. “I said, ‘Who’s that?’ He said, ‘Salvador Perez.’ Fish recognized it right away.”

Bench may have been the greatest catcher ever, but Perez is the only other catcher to make at least six All-Star teams while winning five Gold Gloves and a World Series Most Valuable Player Award.

He is a rare modern species: a high-impact offensive catcher who plays a lot of games.

As recently as 2007, 28 players appeared in at least 95 games as a catcher. Last season that number had dwindled to 15, the fewest since the majors expanded to 30 teams in 1998. Perez did it for the sixth season in a row, but his streak will end in 2019: At the moment Moore spoke, Perez was in Los Angeles to undergo Tommy John surgery, which will cost him the season.

“It’s a big blow to the morale of the organization, because Salvy’s our energy-giver out there,” Moore said. “The fans adore him, and they show up to watch him play regardless of where we are in the standings.”

Without Perez — who hit 27 homers in each of the last two seasons — catchers’ offensive production could slip again this season. In 2018, major league catchers produced a .233 batting average and a .678 on-base plus slugging percentage, both the lowest figures of the 30-team era.

“It’s a very physically demanding position, but that’s been true for years,” said Matt Klentak, the general manager of the Philadelphia Phillies. “On top of that, there has been a shift throughout the league in recent years in the way catcher defense is evaluated, prioritizing catcher framing. The impact of framing on a game is real, and in some cases teams are willing to trade out some offense in exchange for better receiving skills.” 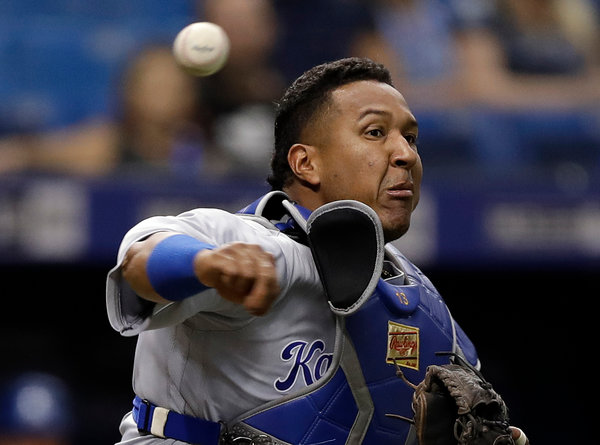 Catchers who can hit are still valued, as evidenced by the Phillies’ trade with the Miami Marlins for J. T. Realmuto, the game’s best offensive catcher. But the Boston Red Sox showed last season that a slugger behind the plate is not always necessary: They won the World Series despite a .194 average and .533 O.P.S. from their catchers, the worst marks for any champion in the live-ball era.

“We look at catcher as a defensive position,” said Dave Dombrowski, Boston’s president of baseball operations. “And so the defensive efficiencies they bring to us, not only the things you can measure with framing, throwing guys out and time to second base, but handling the staff, following the game plan that we want — we put a high priority on that.”

And the job is only getting more challenging. Teams use more pitchers per season than ever, and while fastball velocity has risen in recent years, pitchers are also throwing a greater percentage of breaking balls. That is one factor explaining why wild pitches and passed balls are on the rise.

More important, though, is the emphasis on framing — that is, getting borderline pitches called for strikes. When a catcher tries to present a pitch on the corner as a strike, he will try to keep most of his glove in the strike zone. Catching such pitches in the tip of the webbing, and not the pocket, naturally leads to more pitches that clip the edge of the mitt and roll away.

“It may be the most demanding position in all of sports,” Moore said. “There are more good N.F.L. quarterbacks than there are complete major league catchers with the standards we were raised with.”

Those standards are changing, as reflected by the Red Sox, who were so satisfied with catchers Blake Swihart and Christian Vasquez that they brought them both back despite their weak bats. Boston catchers excelled on defense, ranking third in the majors at framing, according to Baseball Prospectus. The two teams above them were the National League champion Los Angeles Dodgers and, in first place, the Arizona Diamondbacks.

It is no coincidence that one of Arizona’s catchers last season, Jeff Mathis, attracted the attention of the team that ranked worst at framing, the Texas Rangers. Mathis hit .200 and has a .198 average across 14 seasons, but his exceptional defensive skills earned him a two-year, $6.25 million deal from the Rangers.

That is a modest deal by industry standards, but it is the richest one Mathis, who turns 36 this month, has ever signed. He might have had little market appeal anymore if not for today’s methods of measuring defense.

“I’ve always taken a lot of pride in the defensive side of my game,” Mathis said. “Obviously I’d love to contribute a lot more offensively, and I think I can. But for them to acknowledge defense the way they have the last few years is something that I’ve definitely benefited from and definitely thankful for.”

Jon Daniels, the Rangers’ president of baseball operations, said the team determined at the start of the off-season to target a defensive-oriented catcher. The Rangers are entering their final season at outdoor Globe Life Park — a hitter’s paradise — and plan to integrate young pitchers onto their roster as they move to an indoor ballpark in 2020.

Besides Mathis, the Rangers considered Martin Maldonado, who lingered on the market and eventually signed with the Royals as Perez’s replacement, for $2.5 million. Maldonado had a meager .616 O.P.S. for the Los Angeles Angels last season but still appealed to the Houston Astros, who traded for him in July and started him in six of their eight playoff games.

The previous October, Brian McCann caught every inning for the Astros through their victory in Game 7 of the World Series. The 35-year-old McCann, who is second on the active list in games caught behind the St. Louis Cardinals’ Yadier Molina, slumped to a .212 average last season and signed for one year and $2 million with his original team, the Atlanta Braves.

Jeff Luhnow, the Astros’ general manager and a former Cardinals executive, spoke wistfully recently about “the days of having a Yadi Molina.” He could not bring himself to say that those days are over, but he does not see a successor.

“I’m sure there will be some guys like that in the future, but I don’t know why we’re not developing catchers as much,” Luhnow said. “Of all the positions in baseball, that’s probably the thinnest.”

This may simply be a down cycle; Baseball America ranked seven catchers among its top 100 prospects this season, the most since 2012. Then again, that crop from seven years ago — Travis d’Arnaud, Yasmani Grandal, Devin Mesoraco, Jesus Montero, Wilin Rosario, Gary Sanchez and Swihart — has not yielded many stars.

Neal Huntington, the Pittsburgh Pirates’ general manager, said the rise of year-round amateur baseball could be burning out catching prospects; the relentless physical demands, he said, do not help developing hitters. If a catching prospect shows a promising bat, he added, talent evaluators may want him to change positions. (Bryce Harper, the Phillies’ new $330 million outfielder, was a catcher as an amateur.)

“The guy who may be a midrange defender but can swing the bat a little bit, we may be thinking about shifting him out from behind home plate because we want the bat to play — and we’ve become so strict on receiving analytics that we’re almost unforgiving in some cases,” Huntington said.

“So we’ve shifted the pendulum way to the defensive side because we recognize the value it brings. There’s also value in that guy who can receive and hit, but that guy who’s an exceptional receiver, he gets the benefit of the doubt every single time, and we’ve been able to quantify that. So the guys that used to kind of fade away are now hanging around longer.”

Mathis was not the only veteran catcher to receive a multiyear deal in free agency. Kurt Suzuki, 35, got a two-year, $10 million contract in November from the Washington Nationals, who did not stop there. Ten days later, they traded for Yan Gomes, an All-Star catcher for Cleveland last season.

Suzuki — who caught 141 games for Oakland in 2008, his first full season in the majors — said he was happy to share the role. The same analytics wave that identifies and values catchers’ defense also makes the job more demanding because of the volume of information to process before games.

“It used to be a DVD,” Suzuki said. “You’d watch video and go, ‘This is how we’re going to get him out.’ Now you’ve got all these heat maps, velocities, and you’re like, ‘Wow, this is a brain cram.’ It’s a lot of studying, a lot of stress and strain on the brain. To have that mental rest is awesome.”

The Nationals’ time-sharing plan is becoming more of the rule than the exception. The productive hitter who catches nearly every game is harder and harder to find — even, at least for this season, in Kansas City.