A major sporting label has come to the rescue of Kurt Capewell and provided him with a special jockstrap to keep a cricket box tightly in place over his ruptured testicle.

Capewell will come off the bench for Cronulla on Friday night, just a fortnight after suffering the eye-watering injury. 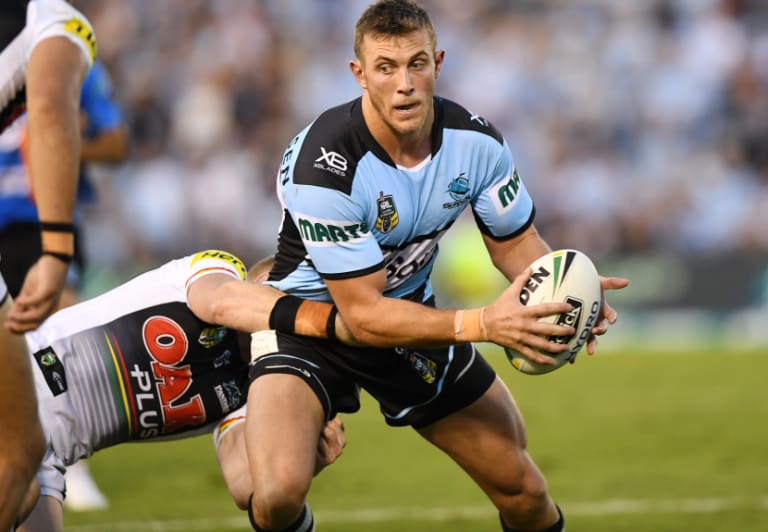 The NRL will need to approve the special guard for Capewell, but Sharks coach Shane Flanagan expected there to be no dramas, and even quipped to Fairfax Media: "He won't be using it as a weapon.''

Jockstraps are not uncommon in sports such as baseball, but almost never worn in rugby league.

"He'll have the guard there and you won't even notice it,'' Flanagan said.

"It's a cricket protector, but not like the ones you remember. I remember trying to play cricket and not being able to run between the wickets because of the pads and the box. This is a 2018 model.

"He ran all week and wrestled, so he'll be fine with it. He was going to play last week, but he was a bit tentative about getting a direct hit on it.''

Capewell has done an amazing job to recover and play in the sudden-death semi-final against Penrith.

Panthers assistant coach Peter Wallace once ruptured a testicle and was not allowed to run for the first two weeks. He did not resume playing for a month.

"And 'Wal' is tough,'' said Panthers playmaker James Maloney, who could not stop cracking jokes about his mate Capewell's latest predicament.

"I'd love to talk about Kurt Capewell and his ruptured testicle. If it's not you, it's funny.

"I sent him a few text messages and asked him, 'Is it bad I find this hilarious?'. He said, 'No, I've been laughing all week'.

"He's wearing some sort of guard. Do you get suspended if you 'squirrel grip' this week? Are you down to 16 men if someone grabs you by the 'canastas'?

"You can try and send some traffic there. But it's a small target. You can still try your best.''

While Maloney chirped about Capewell, the Sharks are hoping to send Maloney nuts by knocking Penrith out of the finals race.

Known for his defensive lapses, Maloney is sure to receive plenty of traffic from his former teammates, but Flanagan said they would treat him like any other playmaker.

Capewell was in line to start for Wade Graham in the back row, but Flanagan has opted to keep him on the bench and start Scott Sorensen.

The 24-year-old Capewell told Fairfax Media earlier in the week how he had copped a knock on the testicles after colliding with Canterbury's Matt Frawley, and they were ''three or four times bigger'' by the time he returned home.