OAKLAND, Calif. — The Golden State Warriors and the Portland Trail Blazers are familiar opponents with disparate identities. And as they prepare for Game 1 of the Western Conference finals on Tuesday night, one franchise has everything that the other covets: the prestige and fulfillment that comes with a championship (or three).

The Blazers, who won their only N.B.A. title in 1977, have already cleared one hurdle by advancing past the conference semifinals for the first time in 19 years. Now, they have another huge opportunity in front of them — to put a dent in a dynasty. And the Warriors, hobbled by an injury to Kevin Durant, are chasing their fourth title in five years.

“It’s a beautiful team to watch,” Warriors Coach Steve Kerr said of the Blazers. “There’s an energy about them, which you can feel even when you’re watching them on TV.”

Kerr cited the Blazers’ continuity as one of the reasons for their success: the same core group of players, the same coaching staff, the same slow build into something greater than respectability. It has been easy for the Warriors to chart the Blazers’ progress: These two teams are meeting in the playoffs for the third time in four seasons, and the previous meetings have not gone particularly well for Portland. In 2016, the Warriors needed five games to eliminate the Blazers in the conference semifinals. One year later, Golden State advanced with a first-round sweep.

These are not the same Blazers, though. They appear tougher and more cohesive under the steady playmaking of Damian Lillard and C. J. McCollum, a gifted backcourt that has spent years toiling in the shadows cast by the Warriors’ Stephen Curry and Klay Thompson.

But Lillard and McCollum have now seized a piece of the stage for themselves. There was Lillard’s series-clinching, buzzer-beating 37-footer against the Oklahoma City Thunder in the first round. And there was Sunday’s Game 7 victory over the Denver Nuggets in the conference semifinals, a game the Blazers won after trailing by as many as 17 points. After McCollum scored 37 points while shooting 17 of 29 from the field, Coach Terry Stotts called it “the biggest win” for the franchise in a long time. It was not a difficult argument to make.

The Warriors showed some toughness of their own in their conference semifinal matchup, overcoming Durant’s absence to finish off the Houston Rockets. Golden State had looked more vulnerable than they ever had since they began collecting titles, but then Curry went out and scored 33 points in the second half of Game 6 to clinch the series.

After Monday’s practice, though, Kerr pumped the brakes on Durant’s potential return. He said Durant had yet to even step on the court after straining a muscle in his right calf against the Rockets last week. Durant, Kerr said, would be re-evaluated on Thursday. 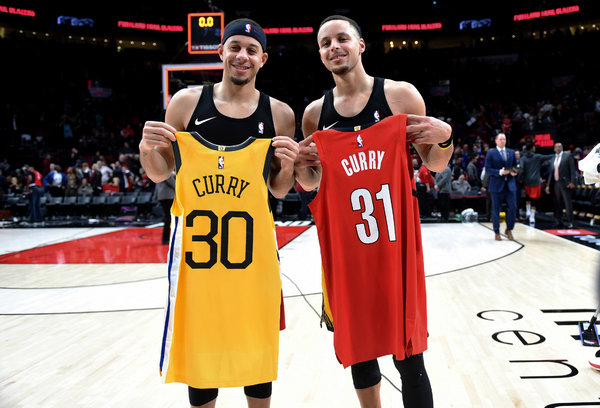 “I think everyone needs to slow down a little on the Kevin stuff,” Kerr said, adding: “He still has pain. There’s time ahead of him on the rehab process.”

As for the series itself, there are plenty of story lines. Near the top of the list: Lillard grew up in Oakland, not far from Oracle Arena.

Story line No. 2: Stephen Curry and the Blazers’ Seth Curry are the first brothers to meet in the conference finals, according to the Elias Sports Bureau. Seth Curry, who ranked third in 3-point shooting percentage this season, one spot ahead of his older brother, had a text message from Steph waiting for him after Sunday’s win: “I’ll see you Tuesday.”

No. 3: McCollum and Durant had something of a falling-out over the summer. In an appearance on McCollum’s podcast, Durant seemed to scoff when McCollum told him that Portland could win a title. Both players later took to Twitter to air their grievances: McCollum called Durant’s decision to join the championship-ready Warriors “soft,” while Durant responded with a reference to “snakes in the grass” after he had deigned to grace McCollum’s podcast with his presence.

Above all, the Blazers seem determined to make their mark. After Sunday’s win against Denver, Lillard and McCollum arrived for a joint news conference — Lillard in a puffy jacket, McCollum in a bespoke suit — and studied a box score that was set on the table before them. Lillard had shot just 3 of 17 from the field, finishing with 13 points, 10 rebounds and 8 assists. In the game’s late stages, he willingly deferred to McCollum.

There was a reason Stotts kept using the word “trust” in his own news conference. He trusts his guards, and they trust each other — even if they have different styles, on and off the court.

“It’s a luxury to have guys like that who can score in different ways,” Stotts said. “One of them is going to have something going.”

What they share — and have shared as teammates for six seasons — is a desire to put Portland in the mix as a true championship contender.

The Blazers want to start something special. The Warriors want to keep their own run going.