The AFL’s pledge to appoint an Indigenous commissioner by close of business 2018 was born out of a  boardroom presentation at head office on February 29, 2016. Now, as the deadline approaches, the accompanying symbolism of that lofty promise remains intriguing.

Just as it did when it appointed its first woman commissioner 13 years ago, the AFL will leave itself open to accusations of tokenism because chairman Richard Goyder will create an extra place on his board for the first Indigenous director. 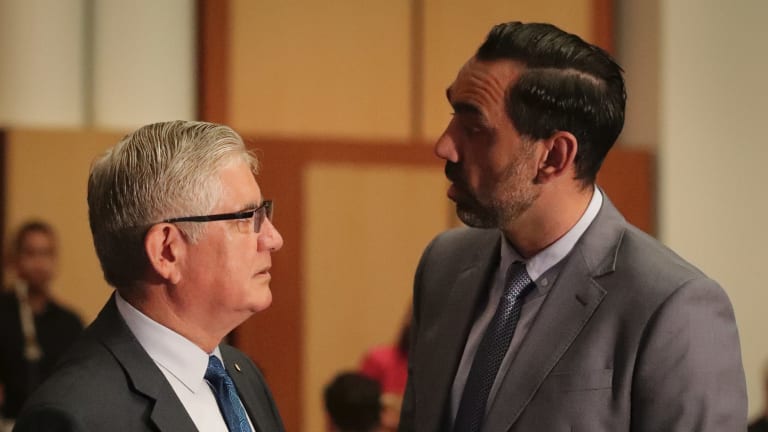 Sam Mostyn’s nomination in 2005 proved to be anything but token, because no commissioner made way for her back then and several high-profile women involved with the game were disappointed. Some made their disgust public. But Goyder remains determined not to lose any of his current group.

But after the appalling commission divide which emerged when Adam Goodes was booed — some refused to see it was racist — and former chairman Mike Fitzpatrick’s failure to put his hand up even now — this appointment looms as important practically as it is symbolically.

It was Fitzpatrick who promised to make it happen in May 2016 and Goyder who restated that pledge when he met the game’s Indigenous Advisory Council last September.

The council, which put forward that recommendation in the late summer of 2016, along with a push to rename the Indigenous round in honour of Sir Doug Nicholls, is less active these days and has suffered from internal issues of its own. But it is worth recalling its strong platform back then and the inclusive game it envisaged.

A push to create football department soft-cap relief for clubs who appointed Indigenous coaches never eventuated. Nor did an adoption of an NFL-style Rooney Rule compelling clubs to interview Indigenous candidates for coaching positions.

Since that call, one of a raft of recommendations resulting from a 12-month review, only Xavier Clarke at Richmond has joined the coaching ranks, meaning that, out of some 170 coaches across the 18 clubs, three are Indigenous.

Although the Indigenous council no longer meets at head office as often as it once did — former senior AFL official Jason Mifsud quit disenchanted earlier this year – there have been no shortage of willing candidates for the commission role, including several council members.
But one of those is not Goodes. Despite Gillon McLachlan’s stated belief that Goodes would prove an ideal appointment and Richard Goyder’s desire to put that into effect, the dual-Brownlow medallist has no intention of taking on the role.

Engrossed in his role as CEO of the Indigenous Defence Consortium and still disconnected from the game, Goodes was to present the medal named for him and Michael O’Loughlin at Friday night's Sydney-Carlton clash in a rare appearance at an AFL fixture. O’Loughlin, too, has indicated work commitments could keep him from the job, but another former player, Che Cockatoo-Collins, is  among  a long line of candidates.

From the advisory council looms its chairman Paul Briggs, a Yorta Yorta man from Shepparton who pioneered not only the Rumbalara Football and Netball Club but also significant Indigenous health and banking services.

West Australian Helen Milroy, a descendent of the Palyku people from the Pilbara who sat on the Royal Commission into Institutional Responses to Child Sexual Abuse, leads an impressive list of female candidates. But there is a view that to appoint an Indigenous woman before a man could prove culturally insensitive.

The glaring dearth of Indigenous representation in the mainstream media was highlighted last Sunday when Gilbert McAdam joined Channel Seven’s commentary team as part of its coverage from Alice Springs for the politically significant Melbourne-Adelaide Traeger Park fixture.

It's incredible to think not one former Indigenous footballer is part of Seven’s coverage nor working in the sports department of the three Melbourne daily newspapers nor on any of the major radio football broadcasts. Having followed up with gusto on its pledge into include more women in its football programming, Fox Footy has no Indigenous presenters or callers.

This was also noted in the advisory council’s report almost two-and-a-half years ago and remains a key priority of Indigenous leader Tanya Hosch, now the AFL’s general manager of inclusion and social policy. It was Hosch who reinforced the Indigenous commission promise at a Sir Doug Nicholls round function on Thursday and who has proved one of the AFL’s more intriguing executives.

Based in Adelaide, Hosch came to the AFL from Recognise — an organisation working for the inclusion of Indigenous Australians in the national constitution — and in a sense replaced Mifsud, the author of the advisory council’s recommendations to the commission albeit in a redesigned executive role.

Hosch was one of a list of AFL executives and consultants who grappled with the political and bureaucratic thicket that was the respect and responsibility policy. Her supporters believe she has not received the management support or guidance necessary for her significant position in the organisation.

Hopefully that will not prove the case where the first Indigenous commissioner is concerned. So few former AFL champions have been seriously considered for board roles due to the fact so many work in the media and the reality which dictates the role is virtually honorary and involves a significant commitment in terms of travel and weekend work. The commission has rejected any push to financially compensate commissioners in certain circumstances.

Determined to select the right candidate and moving to create an extra seat at the board table for the position, perhaps the league will also consider reframing the terms for this historic role. A role which will take another small step towards declaring Indigenous Australians are welcome into the AFL community not simply because they can play football.