Newly-re-signed Western Bulldogs midfielder Mitch Wallis has admitted that he explored the possibility of joining another club during the season as a cloud hovered over his status at Whitten Oval after a hurtful start to 2018.

The 25-year-old son of former Bulldogs star Steve Wallis had a frustrating first half of the year as he not only started the season in the VFL, but found himself back in the reserves when he was dropped after round nine.

It was another month before Wallis, who was strongly rumoured to be joining Essendon as a free agent next month, returned to the senior team and there he stayed for the rest of the year as he averaged 22 disposals and booted 15 goals in the final 11 games.

“I must admit halfway through the year it would be remiss of me not to say I had to really explore some options and I didn’t know how the year was going to pan out,” Wallis told RSN on Thursday.

“But that’s when you rely on the support around you. ‘Rama’ [agent Adam Ramanauskas] was a great support, just putting me on a path to make sure that I had a secure future, the year finished off the way it did which definitely helped the decision.

“I’ve had so many conversations with coaches and players and making sure that I was the person that was going to be able to influence and play some really good footy in years to come.

“But obviously with the family ties it was always going to be a decision that made me stay in the end, but I just had go through the process of having conversations and making sure that this [decision] was the right one.” 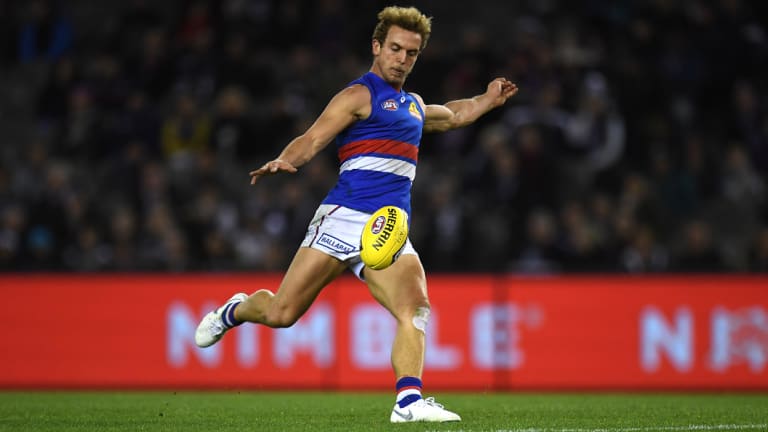 Mitch Wallis admits he was ‘hurting’ during the season, as he explored his options.

Wallis described spending a decent chunk of the first half of the season in the VFL as the “ultimate test”.

“Especially because I’ve got a lot of self-belief and the fact that I wasn’t playing [in the seniors] was hurting a bit, especially when the senior team started off on a really bad foot with two 10-goal losses so that was hard to deal with,” he said.

“But I must admit I was coming under a little bit of an injury cloud earlier in the year and I knew that I had to get through a couple of games.

“It wasn’t the fairytale start that I wanted but I knew that if I stuck at it, and I think I’ve got a pretty good work ethic and that came to the fore and finally I got my opportunity.”

Wallis’ extended stint in the VFL had a lot do with learning the way coach Luke Beveridge wanted him to play.

“I think I was a little bit surprised when I did get dropped and I made sure I was doing everything in my power to play every week and be seen that I was contributing the way he wanted me to,” Wallis said.

“It wasn’t just ‘Bevo’, it was the assistant coaches as well, but I’m pretty proud to say it was off my bat rather than just letting things happen. I definitely put some things in place to make sure that was going to happen swiftly, but also so I could come in and have an immediate impact and hold my spot for the rest of the year.

“It wasn’t the most comfortable process but I’m definitely glad I did it.”

Wallis said his love for the club, and the strong ties his family has to the club, served as an “extra layer” to his decision-making process regarding where he wanted to play beyond 2018.

“I must admit my love for the club never wavered because I’ve been barracking my whole life and dad loves the club and so does my family, my fiancé and her family as well,” he said.

“It was always going to be a factor … you’ve got to make the decision that’s best for you at the end of the day, but definitely the family factor and the love for the club was a big area around that decision.”