When Jason Moloney takes on undefeated Puerto Rican Emmanuel Rodriguez for the IBF world bantamweight title in Orlando, Florida on Sunday (Australian time), he will be fighting for a championship belt that has a special place in Australia’s sporting history.

It is the same title Jeff Fenech won when he brutalised Japanese champion Satoshi Shingaki in Sydney 33 years ago and history shows that the victory was the foundation for the boxer known as the "Marrickville Mauler" to revive a sport that was on the canvas in Australia.

Fenech, who will be honoured in Las Vegas next month as one of the world’s 12 greatest fighters from the past 50 years, said rather than feeling any pangs of nostalgia about his historic 1985 victory, he’s excited for Moloney, whose twin, Andrew, is also a world-ranked fighter. 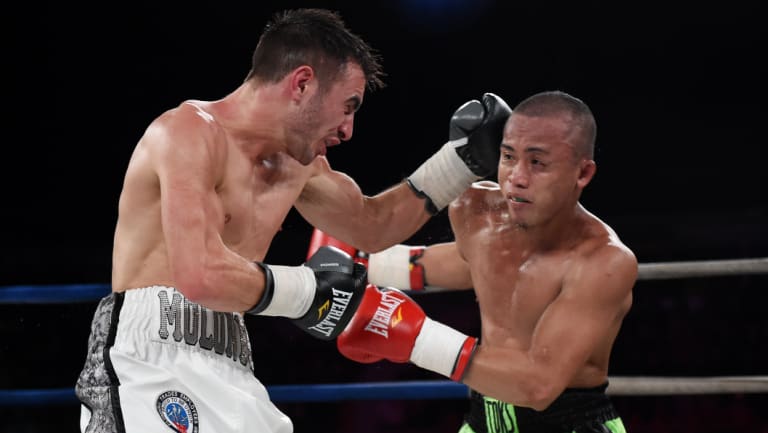 Big hit: Jason Moloney (left) gets his shot at a world title on Sunday.Credit:AAP

“I’m a huge fan of the Moloney boys; they’re great kids and they’re getting better and better,” said Fenech of the 27-year-olds. “I think Jason can do it because he believes in himself, and that’s a big thing. It’d be massive for
Australian boxing if he won.”

Fenech said a Moloney victory would be a boost for Australian boxing at a time when there is a crop of talented young guns on the rise.

“We have a group of kids who can do it and I really do hope Jason is one of them,” Fenech said. “He has a great opportunity and I’m sure he’ll be wanting to make a fist of it. The Moloney boys always give 110 per cent effort and when a fighter does that – win, lose or draw – they help our sport.

Moloney, who relocated from Melbourne to Kingscliff in northern NSW to train under Angelo Hyder, has vowed to defy those who have described him as the underdog.

“It’s what I’ve been training for over the last 15 years,” said Moloney, whose unblemished 17-fight record includes 14 knockouts. “I’ve put in a lot of hard work and the sacrifices have been great … I’ve done so much for this opportunity. I deserve this chance.

“Every drop of blood, sweat and tears I’ve put into boxing will be worth it if I win the belt. You dedicate so much of your life to boxing and, unfortunately, a part of that is being selfish. I’m very lucky to have an understanding partner because Jorja packed up everything, leaving behind her family and friends, so I could train with Angelo, all because I believed I needed to do that to reach the top.”

Moloney expects a tough reception from the army of Puerto Ricans who will be among the crowd and supporting their champion. However, he’s far from fazed.

“He is a world champion for a reason – he’s a very good fighter,” Moloney said. “But I don’t think he’s got what it takes to stop me; I’m too determined and I think I want it more than him … I’ll do what’s needed to have my hand raised in triumph.”

If Moloney wins he will fight Japan’s devastating puncher Naoya Inoue in his first defence as part of the eight-man World Boxing Super Series bantamweight tournament.