John Millman is vowing to take the fight to Novak Djokovic, knowing he can't die wondering if he's to have any hope of continuing his captivating US Open run in New York.

The Australian underdog's quarter-final with the 13-times grand slam champion has been scheduled as the second feature night match at Arthur Ashe Stadium on Wednesday, starting about 11am AEST. 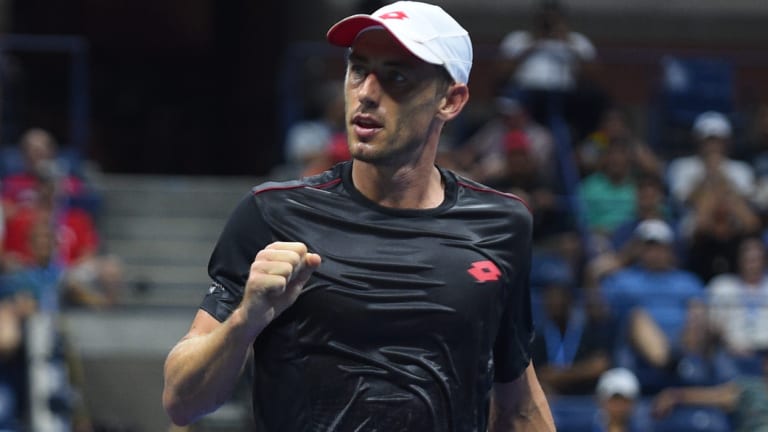 “I’ve got to be really tight with my unforced errors, take my chances and take it to him a little bit”: John Millman

The tennis world will be watching as Millman attempts to add Djokovic's scalp to that of Roger Federer's after the unfancied world No.55 shattered the Swiss superstar's 40-from-40 record against non-top 50 opponents at Flushing Meadows.

"Again, it might sound a bit boring but I've got to control my side of the court," Millman told AAP after a hearty practice session in more suffocating humidity that forced the extreme heat rule to be imposed again on Tuesday.

"I've got to be really tight with my unforced errors, take my chances and take it to him a little bit.

"Anything that drops short, I've got to try to take advantage of it.

"I'm under no illusions that I'm going to have to have one of my very best days to get the job done."

Statistics support the 29-year-old's theory that he needs to be bold.

In winning his past three matches, Millman has hit half as many winners as his vanquished opponents.

Millman has struck 72 winners to 140 from that of Federer, Mikhail Kukushkin and Fabio Fognini combined.

Djokovic's Australian strategist has been a keen observer of Millman's surprise foray through the draw, busily crunching the numbers from the Queenslander's matches.

"His run has been predicated on committing less errors than his opponent," Craig O'Shannessy told AAP.

"His opponents have committed 61 per cent of all errors and Millman's been dining on that.

"The problem in the match-up with Novak is that Novak also employs the same over-arching strategy and, historically, does it better."

After perishing himself, Federer claimed after his shock loss that the brutal conditions favoured Millman.

The Brisbane baseliner is not so sure but is backing his supreme fitness against Djokovic.

"I know I'm meant to be conditioned and used to it but it's not so easy for anyone out there.

"But I'll use every little advantage out there.

"If it does prove to be an advantage then that's great but it's going to be tough for everyone."

"My phone's been going off non-stop," he said.

"I've had overwhelming support back home and abroad.

"Yeah, it's just been going crazy."