David Klemmer and Will Hopoate are happy to play for free if it means the Australia v Tonga Test becomes a reality.

The anticipated clash between the Kangaroos and the World Cup favourites is expected to be finally rubber-stamped next week.

With the match expected to proceed on October 20 at Mt Smart Stadium, one of the final sticking points is how much the players will be paid.

The Kangaroos receive $20,000 a Test against tier-one nations, such as New Zealand, but have rarely played a tier-two nation, such as Tonga, outside of a World Cup.

It has widely been accepted some of the game's biggest stars will pocket less than $5000. 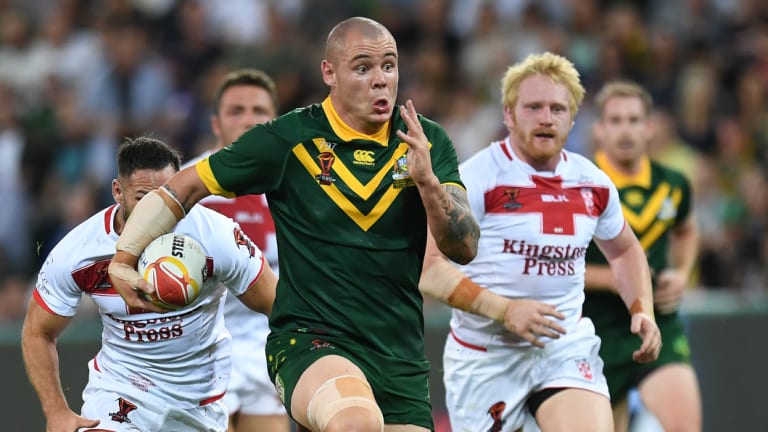 “If it’s going to help grow the international game, I’m more than happy to play for free”: David Klemmer.

Klemmer and Hopoate, who represented Australia and Tonga respectively at the World Cup, are prepared to settle for an even smaller amount.

Klemmer will get the chance to warm up against Tongan drawcard Andrew Fifita when Canterbury try to ruin Cronulla's top-four hopes on Sunday afternoon. The Bulldogs prop is so determined to feature in the Test against Tonga he is prepared to delay surgery on his middle finger, which has been severely bent since Good Friday.

"If it's going to help grow the international game, I'm more than happy to play for free,'' Klemmer said.

"I love playing footy and especially for my country. Tonga has a massive fan base; it would be exciting if I did get picked and got to play in the game.

"I'm only hearing about it via social media, but it would be big for the game if it happens.

"Australia and New Zealand is a big Test, it's always a hard game. Tonga has come out of nowhere and set the world alight, and they've called us out. It would be good to go up against them because they have some stars in their side and want to play against the World Cup champions.

"[Fifita] is a tremendous player; what he does as a forward for Cronulla is pretty special. We need to come with our A game because we know what he's capable of.''

Proud of his heritage: Will Hopoate.

Hopoate said running out for Tonga against the Kangaroos would be "very important for our people".

"Whenever we play it unites us as a nation and to come up against the world's best will be really good for us to see where we're at and a thrill for people to watch," he said.

Hopoate praised the Kangaroos players if they were prepared to take a huge pay cut for the sake of the game proceeding.

As reported by Fairfax Media a few weeks ago, the New Zealand Rugby League did not want the match going ahead for fear it would impact on ticket sales for the Australia-New Zealand Test a week earlier. NRL boss Todd Greenberg has personally tried to broker a deal to ensure the game goes ahead.

Tonga knocked over New Zealand during the pool stages at the World Cup and suffered a heartbreaking defeat against England in the semi-final.

For all the hype surrounding Tonga and how the likes of Fifita, Jason Taumalolo and Tevita Pangai jnr could pose the biggest threat to Australia's dominance – even bigger than New Zealand and England – Hopoate said it was vital the tiny Pacific nation did in fact aim up.

A blowout scoreline would inevitably do more harm than good to the international game.

"You're exactly right, we want this game and we have to match our desire with our performance,'' Hopoate said.

"It would be new for a lot of the boys, including myself, playing footy once the season is done, so we'll have to be on our toes and continue to train, especially those of us not in the finals. There will be a six or seven-week break.''

The immediate focus for Hopoate and Klemmer is Cronulla, a team Klemmer rated a ''dark horse'' come September.