James Tedesco feels he is finding his best form just as Brad Fittler faces the agonising decision about whether to choose him or Tom Trbojevic as his NSW fullback.

Tedesco is the incumbent Blues No.1, but there is little between him and Manly star Trbojevic before the teams are named for the opening State of Origin encounter. Many considered Tedesco one of the few stars assured of retaining his spot from last year’s series, although Fittler remains non-committal until the end of this weekend’s round. 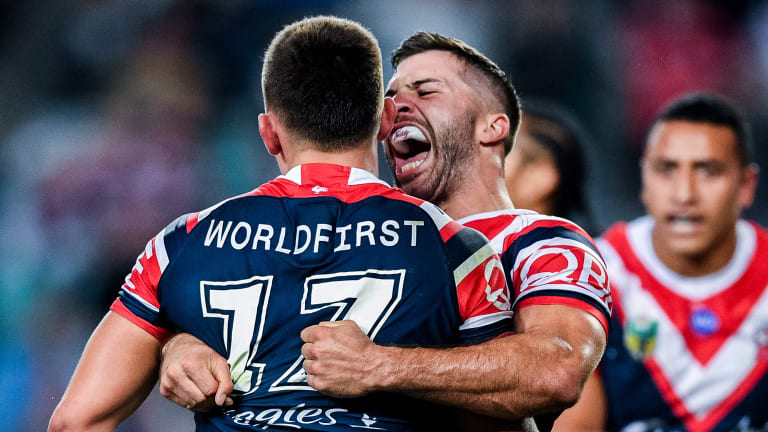 Back to his best: James Tedesco, right, feels he is hitting his straps for the Roosters.

Blues luminaries such as Phil Gould and Paul Gallen have been pushing for Trbojevic to get the nod but, like the contentious halves spots, nothing has been decided.

The Roosters recruit concedes it has taken him some time to adjust to his new teammates and their style of playing after switching from Wests Tigers, but has been encouraged by his form in the past month.

“Personally, I feel I’m hitting my straps and getting better and better,” Tedesco told Fairfax Media.

“I’ve been happy, I’ve been getting better and feeling more comfortable, so it’s up to the coaches if they think that’s good enough.

“There’s a lot of guys that are in form, a lot of outside backs that can get picked. No one knows what Freddy is going to do, it’s all left open.

“For me personally I’ve been worrying about my own form the last few weeks. I’m starting to really really improve, both the team and my personal form is getting there.

“I’m happy with how I’m going the last few weeks and will try to continue to improve.” 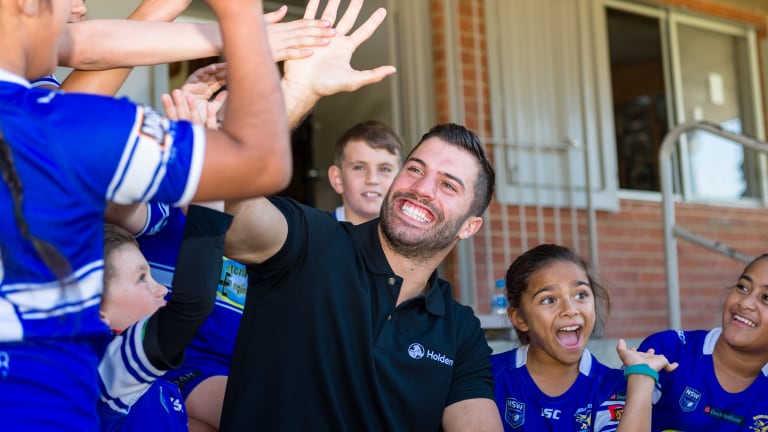 King of the kids: James Tedesco with his old junior side, Narraweena Hawks, on Wednesday.

Ironically, Tedesco was speaking while in Trbojevic’s heartland on the northern beaches. The 25-year-old was at the training session of junior side Narraweena Hawks in his capacity as a Holden ambassador, informing the team it had been chosen as the NSW representative for the third Junior State of Origin challenge against a Victorian side at the MCG.

Tedesco welcomed the healthy competition for spots with Trbojevic, believing it would bring out the best in both of them.

“Definitely, there’s a lot of guys that are in form, a lot of outside backs that can get picked,” he said.

“Around this time there is a lot of talk and media about who is going to be put in, there’s a lot of speculation. The important thing for me is not to worry about it and play good footy for the Roosters.

“With two main players in key positions with me and Cooper [Cronk] coming, there have been structural changes. It takes a bit of time to get used to, but the last few weeks we’ve put on some points and won a few games.

“The confidence is building and we’re getting better and better.

“Us as a team have been on the improve over the last few weeks and that’s going to continue to be my focus this weekend against the Titans.”

There is little between Tedesco and Trbojevic statistically. According to Champion Data, Tedesco is slightly in front in running metres (172.5 versus 158.6), tackle busts (48 to 30) and has scored one additional try. However, Trbojevic leads in try assists (seven to four) and has eight line-break assists to Tedesco’s two.

Asked about Gallen and Gould’s comments, Tedesco said: “I haven’t listened to it all, to be honest. I’ve stayed away from any media or reading or hearing those things. Personally, I want to bunker down and not read into it.