One of Godolphin’s many homes is in the Hunter Valley, so the Scone weekend is an important date on the calendar, but the focus for trainer James Cummings will be on Impending in the Doomben 10,000 on Saturday.

Godolphin’s trainer will be trackside at Doomben as Impending attempts to lower the colours of star sprinters Redzel and In Her Time to add a second group 1 to his racing resume, which will close in Brisbane as a stud career looms at the end of the season. 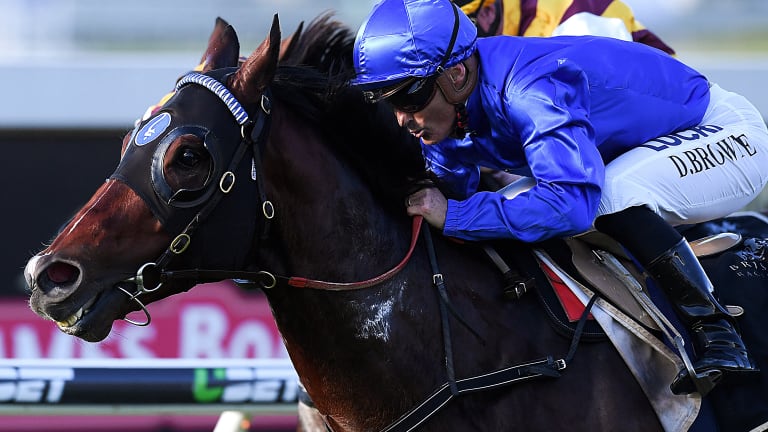 In form: Damien Browne pilots Impending to victory at Doomben in her last start.

“It is a proper group 1 sprint when you have horses like those in it but we believe he is up to it and he has shown that before,” Cummings said. “He is already a Stradbroke winner at Doomben and was placed in a Caulfield Guineas, but if you look at his form his best performance have been at 1200m and at weight-for-age.

”There is argument to say he is better at 1400m as a Stradbroke winner, but I think of him as strong sprinter. It is an important group 1 and I want to be there but I will watching Scone, where we have strong chances.”

Among them are fillies Demerara and Resin in the Denise’s Joy Stakes at listed level and Ghisoni and Philosophy in the group 3 Dark Jewel Classic.

They could be some of Impending's suitors when he heads to Northwood Park in Victoria at the end of the season.

Cummings believes it could be Ghisoni’s chance to break through in the Dark Jewel, where she is topweight.

“She looks well-placed here to produce another strong effort,” he said. “We’ve gone with the blinkers for the first time in order to encourage her to hit top gear sooner and she should be running very well.”

He favours her over Philosophy, which he only rates a top five hope.

Impending was aimed at the Brisbane winter carnival and started his Queensland preparation with a strong win in the Victory Stakes which Cummings used as a stepping stone to the group 1, which he admits is a big step up.

“If he could get a win against Redzel, which has been the benchmark sprinter in Australia, it would be a great way for him to go out,” Cummings said. “He has a wonderful family behind him with his parents both great sprinter-milers and we are looking the other group 1 races in Brisbane.

“He has trimmed up from the Victory Stakes win and is bit tighter for this race. However he would need to be because of the competition.”

Impending is a $10 chance for the Doomben 10,000, where betting is dominated by TJ Smith placegetters Redzel and In Her Time.

Both have already secured places for October’s The Everest, where Redzel will defend his crown, as he does in the 10,000 on Saturday. He is the $2.30 Ladbrokes favourite, with In Her Time the only other horse under the  $10 mark at $3.60.

Godolphin have a strong team in Brisbane with Interlocuter and Marsupial stepping up to black type, while smart Exceed And Excel colt Dynamited returns in the Champagne Classic.

“We haven’t seen him at the races since November when he won on debut at Rosehill,” Cummings said. “He’s come back looking incredible.

“As a promising young horse he gets the opportunity this preparation to prove himself above average and he certainly appears to have the scope to go further.”