The Oakland Athletics were overjoyed to choose Kyler Murray with the ninth pick in the baseball draft last June.

“We just don’t see athletes like this on the baseball field very often,” their scouting director, Eric Kubota, said then, praising Murray’s instincts despite his relative lack of baseball experience. “He’s just a tremendous athlete, which can translate to the baseball field in a lot of ways. He has a chance to really be dominant on both the offensive end and from a defensive standpoint.”

Kubota said the risk of Murray’s playing quarterback at the University of Oklahoma was worth taking.

“Frankly, we’re kind of excited to be an Oklahoma fan for 12 games,” he said.

Everybody knows what happened next. Those 12 regular-season games led to the conference title game and the Orange Bowl, and by the end, Murray had more than 5,000 all-purpose yards, 54 overall touchdowns, a Heisman Trophy — and a new career path.

Murray announced via Twitter on Monday that he was “firmly and fully committing my life and time to becoming an N.F.L. quarterback.” His statement made no mention of baseball, the A’s, or the $4.6 million deal he reached with them last June, with the promise to play only baseball after the 2018 college football season.

The A’s were the first team to hold formal workouts for pitchers and catchers on Monday — they started earlier than other teams, to prepare for a season-opening series in Japan with the Seattle Mariners on March 20 and 21 — and Murray will not be joining them. He will return $1.29 million of his $1.5 million signing bonus, according to ESPN, and will not collect the remaining $3.16 million that he was due to be paid next month.

He had been assigned a locker in the clubhouse, and on Monday morning, Oakland officials had expressed hope that Murray would soon slip into his No. 73 jersey.

Bob Melvin, the A’s manager, said he was “cautiously optimistic” that Murray would choose baseball, according to the San Francisco Chronicle. Yet, realistically, those hopes had been dimming since Murray declared for the N.F.L. draft on Jan. 14. The A’s retain his rights should Murray ever reconsider, but they will get no compensation pick for his defection. They gambled and lost — but baseball lost even bigger.

Murray teased the possibility of playing both sports in a photo he posted to Twitter in November, re-enacting a ubiquitous Bo Jackson photo from the 1980s by posing shirtless with football pads on his shoulders and a baseball bat behind his back.

But Jackson, of course, did not play quarterback, an all-consuming position that leaves no room for distraction. To maximize his appeal to teams — and his potential for success — Murray chose football exclusively, which most likely will bring him more money, at least at first, and definitely offers a quicker path to glory. 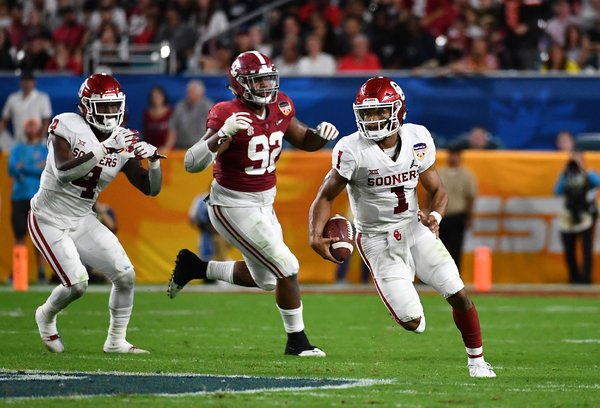 The sports are fundamentally different in their development processes, of course. Almost every baseball player logs years in the minors, riding buses to remote outposts for a punishing daily test that is at least as much mental as physical. A first-round N.F.L. quarterback is typically hailed as the instant savior of his franchise.

Murray’s predecessor as Heisman Trophy winner and Oklahoma quarterback, Baker Mayfield, needed one month to establish himself as the starter for the Cleveland Browns. He sat the first two weeks, came off the bench in Week 3 and was starting for good by Sept. 30. What’s more appealing to a 21-year-old athlete: the Mayfield plan, or a summer trying to hit sliders for an A’s affiliate in Beloit, Wis., or Stockton, Calif.?

Murray’s uncle, Calvin Murray, offers an example of the uncertainties of life as a baseball prospect. The San Francisco Giants chose Calvin Murray with the seventh overall pick in the 1992 draft. He played more than 1,600 professional games, but fewer than 300 in the majors. The player taken one pick before Murray did just a bit better. His name was Derek Jeter.

We’ll probably never know what Kyler Murray could have been as a baseball player. He could always try the sport again if football fizzles, as Tim Tebow is doing with the Mets. But baseball, as an institution, does not give itself the best chance to attract an athlete like Murray, whose bonus potential was limited by the strict draft-slotting system instituted in 2012.

The draft system has always incentivized losing, to some extent — in 2009 and 2010, the Washington Nationals plotted a new course by taking Stephen Strasburg and Bryce Harper first over all in consecutive drafts. But by awarding a fixed amount of bonus money to teams — with the worst team getting by far the largest allowance — the new rules have greatly encouraged protracted rebuilding.

The Houston Astros understood this better than most, and became a perennial power by using the system to their advantage. They have spawned so many imitators that a record eight teams tallied 95 losses last season.

The players’ union has been dismayed by this trend, which has lessened demand — and therefore salaries — for veteran free agents. Murray’s case shows another regrettable consequence. Perhaps if the A’s had been able to offer more money to Murray last June, they could have kept him off the football field entirely.

Instead, their $4.6 million bought only a half-measure, allowing Murray one final fling with an old flame. As it turns out, he fell truly, madly, deeply back in love. The A’s get their ring back, but baseball is left at the altar.