As the end-of-NRL-season tension ratchets up, those who are concerned about your mental welfare might tell you that the wooden spoon "is not a thing". It doesn’t exist, therefore you should stop obsessing about it. But if we have nothing to fear but fear itself, then that is all the more reason to be scared. You can worry the spoon into reality. For an NRL fan, which implies depressive tendencies, you can be far more scared of a spoon than you were ever euphoric about a premiership. 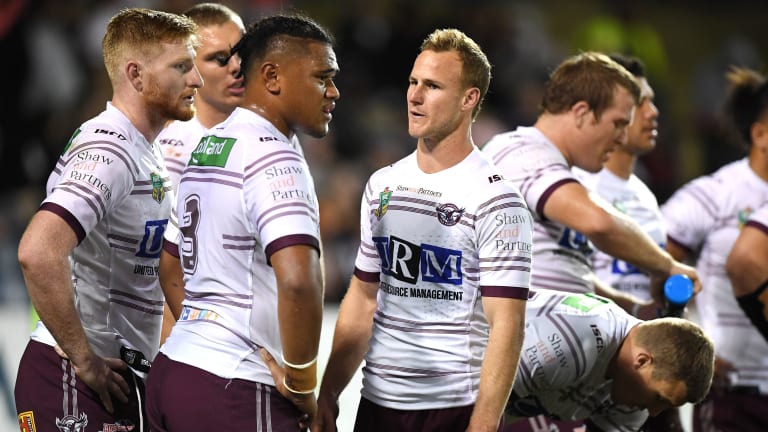 Struggling: Manly have existed for over 70 years and have never got the wooden spoon. is 2018 the year?

Wooden spoon phobia is a submerged reef that lurks ominously in May and June, then begins to show when the tide drops out in July. By August, you can see that jagged reef up ahead and your team is steaming straight towards it.

"Look out, you muppets!"

Alas, your television, radio, newspaper and favourite website do not listen. The captain and crew steam ahead, apparently oblivious to the danger ahead.

"We're not talking about it," they say, being too tough to bare their fears. Or maybe they’re clueless.

Fans, who are not tough and are consumed by their fears, cry, "Talk about it, you idiots!" But you are in a space – at home, refusing to have your heart ripped out at live matches – where nobody can hear you scream.

Five teams in the NRL – Wests Tigers, St George Illawarra, the New Zealand Warriors, the Brisbane Broncos and Manly – have never won the wooden spoon. But Wests (the kings of spooning with 17 in 92 seasons), Balmain, St George and Illawarra all won it, so that leaves only the Warriors, Broncos and Manly as entirely spoon-free. The Warriors and Broncos have been around for 23 and 30 years respectively, Manly for 72. Among those three, Manly (yeah, I know) have been heading towards that reef for months. Coach Trent Barrett was not talking about it, but perhaps sensing it, he jumped overboard back in July. A likeable man, he at least did not lose the dressing room. A portion of that dressing room, fearing they had lost him, jumped in too.

The wooden spoon is a thing, because for up to half the clubs in any competition, avoiding it is what sustains interest from Origin onwards. If those clubs include hugely-supported ones like Parramatta and Canterbury, that means more than half of all NRL fans spend their winter worrying about the spoon. It becomes the only thing to play for. Or against. (Contrast the NRL's good fortune – open contests for both premiership and spoon – with the AFL’s, where Richmond have been runaway premiership favourites since last year’s grand final, while Carlton had the spoon wrapped up back in March. Where’s the fun in that, you ask.)

But it's not fun. For fans, wooden spoon phobia engenders an upside-down way of watching the game. You ignore the teams jockeying for the premiership. They are the corporate department on another floor, with executive bathrooms. Who cares about them. What matters for spoonophobes is not winning, but which rival spoon contenders are losing. Your season becomes a mirror image of the more widely-reported contest for the premiership. For every surprise package grand final hope, there is a surprise package spoon dread. The unheralded Rabbitohs have their anti-matter counterpart in the over-heralded Eels. As the Broncos mysteriously keep winning despite injuries, inexperience and turmoil, the Cowboys mysteriously keep losing despite having substantially the same team that played in two of the past three grand finals. As the Roosters spend their way to top spot, Canterbury anti-spend their way towards the bottom, showing that at both ends of the table, they get what they paid for.

Top and bottom, it’s all about momentum. We accept that the winner of the premiership will be the team that generates an unstoppable flow in September. The favourite for the spoon generates an equally unstoppable momentum in August. Manly, since that catastrophic system failure against Penrith at Brookvale, have a certain stench just as the Roosters have a certain perfume. There are always upsets – the Roosters lose to the Raiders, disrupting momentum at the top, the Eels smash the Dragons and Manly beat the Sharks to confound expectations at the bottom, but there is an underlying gurgle, like water running out of a drain, and outcomes begin to seem inevitable.

The best team doesn't always win the premiership, and likewise, the most deserving team doesn’t always win the spoon. Morally, most would say that Manly deserve the 2018 wooden spoon, as an all-round, on- and off-field effort. If they don’t win it this year, they never will. Parramatta and the Cowboys confound expectations by being where they are. The Bulldogs, like the Titans, wriggle out of the spoon zone by playing with the freedom of low expectations. But Manly, everyone else’s perennial spoon preference, have throughout 2018 looked like a team without seventeen players who can play for eighty minutes each week. And before you blame the players, where is the bedrock of support they are playing for? Their organisation? Demountables and rusty bar bells at Narrabeen, and a head office exuding all the professionalism of the Federal Liberal Party. Their club’s proud history? At a 10-year anniversary of the 2008 premiership, the turnout was in single figures. The fans? Manly fans vote with their feet. 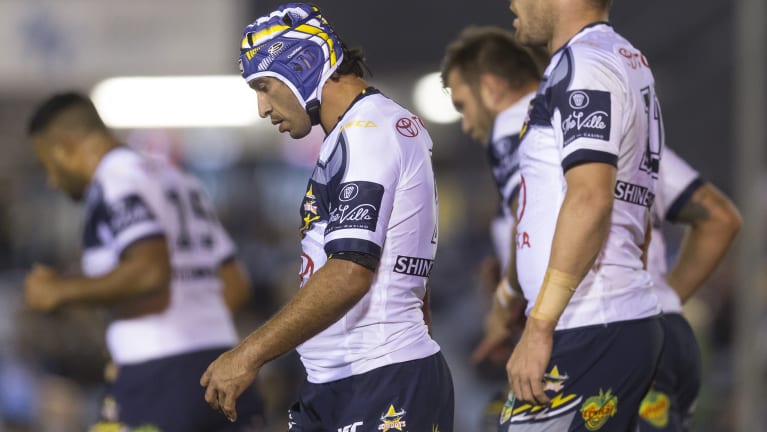 Not a great send-off: Johnathan Thurston’s Cowboys are sitting last with two rounds to go.

Wooden spoon phobia is no way to live, as soul-corroding as hanging out in a job for the next redundancy. To invest your passion in wanting other teams to lose makes for a dismal weekend. Of course, we all want other teams to lose, but when your great moment of NRL ecstasy for the weekend is some other team being even more hapless than yours, you need to take a hard look at yourself and maybe listen to those who say it doesn’t matter.

But it does matter! The wooden spoon has a proud tradition. According to Francis Grose’s 1811 Dictionary of the Vulgar Tongue, it was invented by Cambridge University mathematics students for the student who got the lowest marks yet still graduated. (According to this logic, the 2018 NRL wooden spoon should maybe go to the Knights or Raiders, because at least they haven’t been outright failures.) The original spoon was made of real wood. They grew to five feet in length by the 1870s and if that isn’t a thing, I’ve never seen things. In 1909, Cambridge banned it as it was felt to be horribly mean. There are photos of the last recipient, Cuthbert Lempriere Holthouse, with his enormous spoon, looking sad.

Banned from academia, the spoon escaped into the sporting world. Its private-college heritage is still honoured, as recently as last week when the unfortunate Shore School rugby firsts had a real spoon planted on their home ground. But it’s become more democratic. In America, where fetishes must be given material form, Major League Soccer created an actual Wooden Spoon Trophy in 2015. It gets awarded. It is a thing. The Tour de France, in which the symbolic ‘lanterne rouge’ goes to the last-placed rider, has altered its points rules to make it harder for a cyclist to intentionally finish last. Why? There’s money in it. Everyone remembers who wins the ‘lanterne rouge’, and its winners can clean up on appearance fees. So they actually compete to win the spoon, which is a bit like AFL clubs tanking to win draft concessions.

The NRL wooden spooners win no favours, and I can’t see anyone paying money to hear from them. Their names live in ignominy. If teams at the bottom are only playing for pride, those who win the spoon must have the least pride. That’s got to hurt. And if it hurts, it’s got to be a thing.