The San Jose Sharks and the St. Louis Blues, who will square off in Game 1 of the N.H.L.’s Western Conference finals Saturday, are each in pursuit of their first Stanley Cup. The only player on either team who has won a Cup is Sharks goalie Martin Jones, a backup for the Los Angeles Kings in 2014.

The Blues have been in the league since 1967 and are the last remaining “Expansion Six” franchise to have never lifted the Cup. They went to three straight finals from 1968 to 1970 but did not muster a single victory in 12 games.

The Sharks entered the league in 1991 and have been a model franchise in many ways, but the Cup has eluded them, most notably in 2016 when their only finals appearance ended with a six-game loss to the Pittsburgh Penguins. The Sharks eliminated the Blues in the conference finals that season.

This season began with astronomical expectations for the Sharks, who had parlayed a combination of savvy drafting, shrewd trades and European scouting into the most talented roster in the West, and perhaps the league.

The Blues sank to the bottom of the league standings as 2018 ended. But they abruptly changed course following a coaching change to Craig Berube, who became a Jack Adams Award finalist. St. Louis was also aided greatly by the rookie goalie Jordan Binnington’s rise from obscurity to stardom.

How They Got Here

The Sharks arrive to the conference finals after two dramatic series victories where much of the spotlight was on officiating. San Jose rallied from a 3-1 series deficit against the defending conference champion Vegas Golden Knights, coming back from 3-0 disadvantage in Game 7. They poured in four goals in about four minutes during a major penalty and then completed their heist of the series in overtime. Their captain, Joe Pavelski, sustained head injuries on the controversial major penalty, which many felt should have been a minor penalty.

The Sharks would again go to seven games against the Colorado Avalanche. San Jose’s 3-2 victory in Game 7 was given a both a symbolic and substantive push by Pavelski’s return: he deflected in their first goal and assisted on their second. After another controversy — this time a Colorado goal that was nullified by video review — Joonas Donskoi notched the game-winning goal. Only two teams have gone to Game 7 in each of the first three rounds: the Toronto Maple Leafs, who lost Game 7 of the conference finals in 1993, and the Los Angeles Kings, who won the Stanley Cup in 2014.

The Blues were able to dispatch the Winnipeg Jets in the first round in six games, then fell behind 3 games to 2 against the Dallas Stars in second round. The Blues forced a Game 7 in which they peppered Dallas goalie Ben Bishop, a Vezina Trophy finalist and St. Louis native, with shot after shot from all angles. During one stretch they outshot the Stars by 25-2 and later held a 50-22 advantage, though the score remained tied at 1-1 into a second overtime. Eventually Patrick Maroon, another St. Louis native, popped in a rebound in double overtime to send the Blues onto the conference finals. 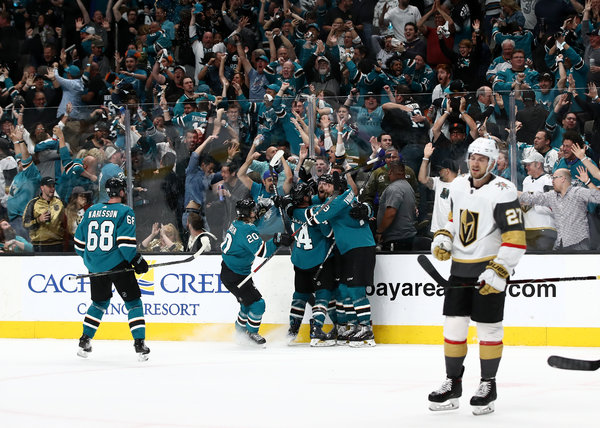 San Jose at a Glance

Forwards Logan Couture and Tomas Hertl are tied for the league lead in postseason points (14) and goals (9). Pavelski and the former captain Joe Thornton, 39, have provided uncommon leadership. On defense, the Norris Trophy winner Brent Burns also shares the N.H.L. points lead and has cranked up his physical play. Erik Karlsson, a two-time Norris Trophy winner, has persevered through groin injuries and dished out more assists (12) than anyone in the playoffs. Defenseman Marc-Edouard Vlasic has played his best hockey of the season down the stretch and in the playoffs. In net, Jones has rebounded from a rocky season and turbulent start to the playoffs, winning seven of his last 10 games in net and allowing two or fewer goals in seven of those games.

St. Louis at a Glance

The Blues have gotten tepid production of their star winger Vladimir Tarasenko. Instead, their most consistent threat has been wing Jaden Schwartz, who has two game-winners among his eight goals. The 19-year-old rookie Robert Thomas, a first-round draft pick in 2017, was a major factor against the Stars, including two assists in Game 7. On defense, the team captain Alex Pietrangelo has produced 11 points in addition to managing a cumbersome defensive load. Binnington, who made his first N.H.L. start in January, has continued to display poise that belies his limited experience. 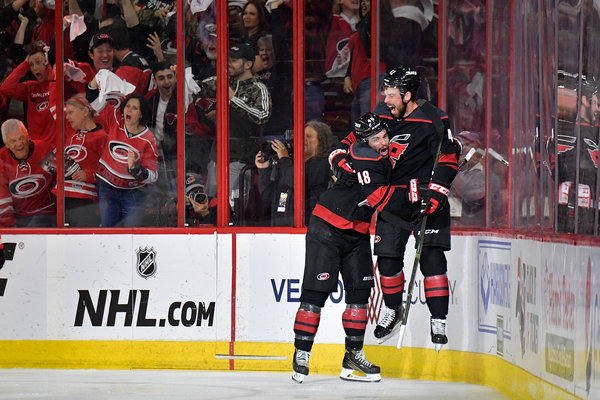 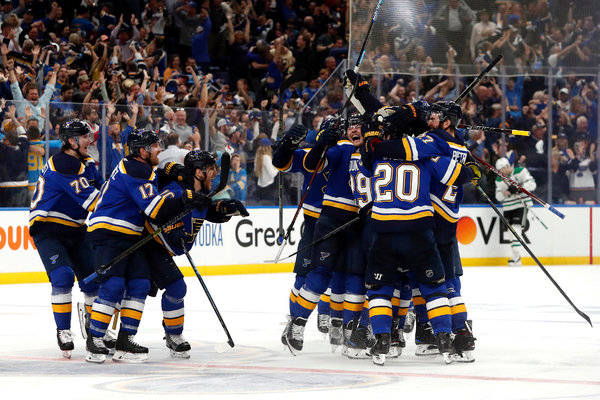