The House Full sign is just about to go up at Penrith as an injury to fullback Dylan Edwards soured their 22-14 convincing yet spiteful victory over Canterbury at Panthers Stadium.

Nearly a third of the way into the NRL season and the mountain men have lost a third of their 30-man squad to a raft of injuries. 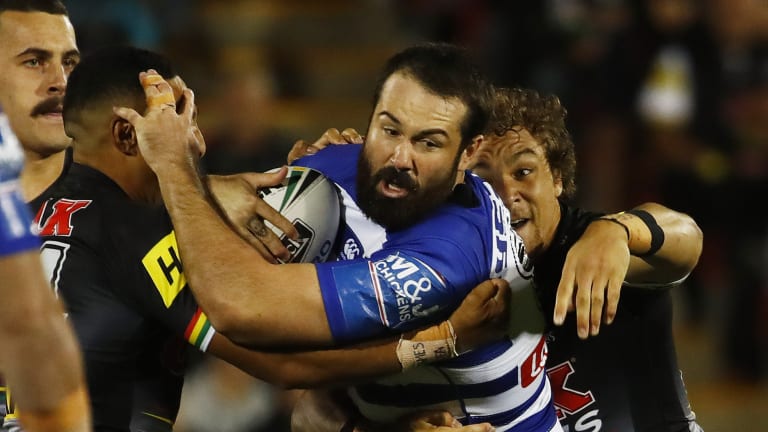 Edwards lasted just 14 minutes on Friday night after he was brought down from behind just short of the try line and dislocated his right shoulder.

Captain Peter Wallace was ruled out during the week with a neck injury, while eight others are stranded on the sidelines, including halfback Nathan Cleary (knee), Waqa Blake (ankle), Tyrone May (knee) and Josh Mansour, who underwent surgery for facial fractures first thing Friday.

Wallace and possibly May could be available for next Friday's home game in Bathurst against North Queensland.

"Dylan has a dislocated shoulder. The doc had to put it back in in the sheds. It's not good, but we'll have a look tomorrow and see what we need to do,'' coach Anthony Griffin said. 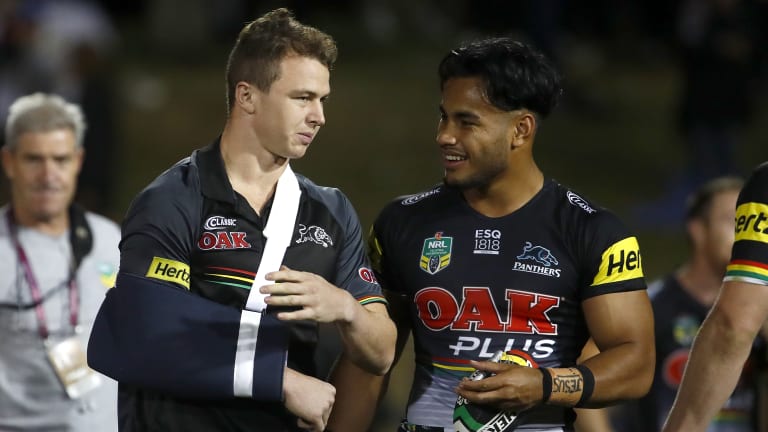 Winged: Dylan Edwards with his arm in sling after dislocating his shoulder.

"Tyrone has hopefully his last appointment with the surgeon on Monday, and if he gets the all-clear he'll be available.

"He's trained really strongly the last month and back in the main group.

"If he's fit, he's a class player. Obviously, he'll be short of a run, but we might be able to use him off the bench.

"'Wal' should be right next week. He's had a neck problem the last couple of weeks and a cortisone injection. With the short turnaround, it was a bit too short for him this week.''

For all of their injuries and players being forced to plug different positions in the field, Penrith still proved too good for the Dogs.

And it was James Maloney, who for a brief period looked troubled by his own injury to the shoulders or neck, stood up when the team needed him most.

Maloney is a big reason the Panthers are now suddenly sitting in second spot on the ladder behind St George Illawarra.

He had a hand in all three tries and barked orders at the forwards when they lost their way after Edwards departed.

Canterbury posted their two tries not long after Edwards came from the field and Maloney and big Billy Kikau were caught out of position defending at left centre.

It is scary to think what the Panthers will look like in the second half of the season when they start to get some troops back.

Their big men hit hard on Friday night and were also happy to throw the ball around.

Tensions flared again just before full-time with Klemmer fired up over Penrith celebrating a giant hit on Jeremy Marshall-King as he laid on the deck.

Klemmer was given 10 minutes in the sin bin for his troubles.

"There was a bit of a scrap in the scrum, he [Merrin] has thrown a punch or a slap and hit Klemmer in the side of the face,'' Josh Jackson said afterwards.

"I've seen plenty get pulled back and the player sent for ten, but it was play on.

"Then later in the game he [Klemmer] shoves a bloke for what he thought was an illegal tackle and he gets sent [to the bin] for that.''

Young Jack Hetherington brought the healthy 13,760-strong crowd to life when he put a shot on Woods and forced a knock-on with just 15 minutes on the clock.

Penrith scored in the next set through Isaah Yeo but Hetherington was given the hero's applause.