Tevita Kuridrani's end-of-season revival has been ruined by injury, with the ACT Brumbies centre set to miss up to three months after tearing his pectoral in the last game of the Super Rugby season.

The injury will have surgery to repair the damage and will miss up to three months, effectively ending his season unless the Wallabies pick him for the end of year tour of Europe. 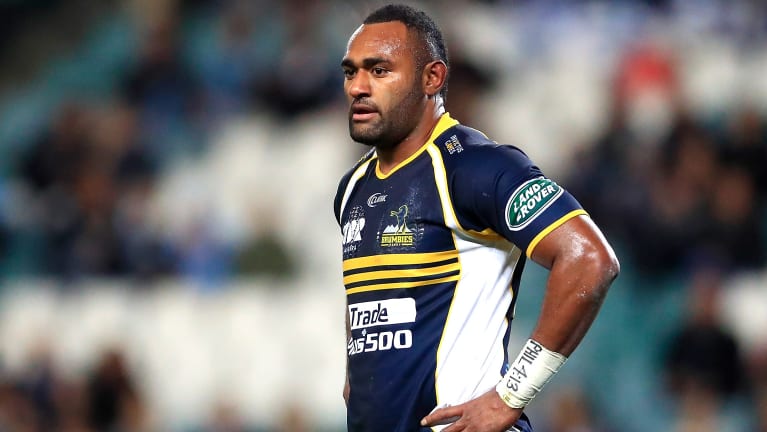 It's a cruel blow for the Fijian powerhouse, who was destined to reclaim the Wallabies' outside centre duties after rediscovering his best form in the last six weeks of the Brumbies campaign.

Kuridrani will be out of action until late October, but could be added to the spring tour squad as the Wallabies scramble to find someone new to fill the No. 13.

Kuridrani and Samu Kerevi have battled for the position in recent years, but Kerevi's injury opened the door for Kuridrani to force his way back into a starting spot in the Rugby Championship.

Kuridrani dropped three kilograms after being overlooked for the mid-year Test series and was at his barnstorming best in the Brumbies' win against the NSW Waratahs in the last game of the season.

"I was really stoked with the way we finished, everyone got the combination right at the end. It was just unlucky we did it at the end of the season … we peaked at the wrong time," Kuridrani said.

"I was just trying get into the new game plan [at the Brumbies], so I started to understand it more and as long as I can get my hands on the ball, it will help the team.

"I hadn't focused on Wallabies at all. I just wanted to improve my rugby and play really well, hopefully that would help take me somewhere."

Some of the Brumbies returned to training on Thursday as part of a pre-Wallabies camp program. Fullback Tom Banks is pushing for his Test debut after an impressive end to the year, while David Pocock also showed he was back to his best.

Brumbies winger Henry Speight is expected to link with Irish club Ulster on a short-term deal, ruling him out of Wallabies contention for the end of year Tests.

But Speight is also expected to spend up to six weeks on the sideline after damaging ligaments in his ankle.

The Brumbies have also farewelled a host of players, with Isi Naisrani confirming his move to the Melbourne Rebels on Thursday morning.

Kyle Godwin has signed to play with Connacht in Ireland, Andrew Smith has retired, Richie Arnold will play in Japan and Robbie Abel, Nic Mayhew, James Dargaville and Faalelei Sione are also leaving the Canberra club.