What's the difference between a locally-trained horse and a foreign raider?

About 18 months … where the Melbourne and Caulfield Cups are so often concerned.

Racing Victoria handicapper Greg Carpenter rarely cracks jokes about the weights allocation for the two big races for which he sets the scales. 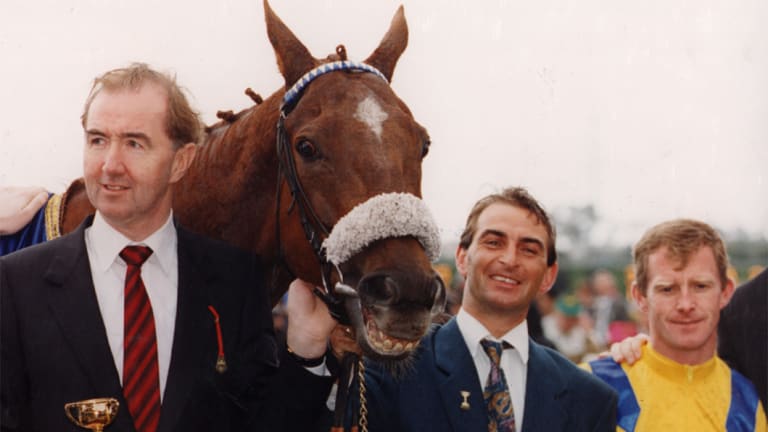 But that was a line he used earlier this week when he unveiled the handicaps for both contests, as he looked to put in context what he and Racing Victoria officials would have anticpated – a backlash against the number of high-class overseas entries for two of Australia's greatest races.

The rumblings of discontent have been building for years, with complaints that so called ''battling'' trainers and owners can't get a chance to win these races as they struggle to compete against the might of Sheik Mohammed, Qatar Racing, various other Middle Eastern, racing-obsessed potentates and, of course, the Coolmore racing and breeding machine from Ireland.

''There is tremendous depth and quality among the entries and I suspect that the challenge to gain a start in both Cups will be the toughest in recent years,'' Carpenter acknowledged.

But there is a good reason why this has happened in the 25 years since Vintage Crop, trained by the Irish master Dermot Weld, became the first horse trained outside Australia and New Zealand to win the Melbourne Cup.

Australian prizemoney is a great lure. Nowhere in Europe can handicappers race for anything like the $7 million on offer for the Melbourne Cup. To put that in perspective, the Ebor Handicap, a 2800 metre race at York that often provides a decent Cup guide, is due to receive a massive stake hike next year, doubling its value to £1 million – around $2 million. That's just about a third of the Cup's stake, so it's no wonder even the richest owners in England, Ireland, France and Germany want to turn up at Flemington on the first Tuesday in November.

While the vast influx of foreign horses clearly puts the locals on the back foot, it's instructive to try to decide just what is a local and what isn't.

Of the top 16 in the weights this year, Humidor was imported from New Zealand to be trained by Darren Weir a couple of years ago, Best Solution and Lancaster Bomber are trained in England and Ireland while Torcedor is now trained in Germany – but for Australian owners, who shelled out a seven figure sum to buy him.

Cliffs of Moher is trained in Ireland, Comin' Through, from the Chris Waller stable, has done all his racing in Australia, Idaho and Magic Circle are trained in Ireland and England respectively, while Ambitious is now prepared at Flemington by Anthony Freedman but is a former Japanese horse.

Chestnut Coat is Japanese-trained, while Harlem is a former French horse who has been with David Hayes for a couple of seasons. Jon Snow is a bona fide Kiwi, while Muntahaa won this year's Ebor for the Newmarket stable of John Gosden.

Sound Check is a former German galloper now with Mike Moroney at Flemington, Who Shot Thebarman is an ex-Kiwi warhorse who has been with Waller for years, and Tosen Basil is another former Japanese runner now based in Ballarat with Weir.

How are those all classified? Harlem fits the Carpenter aside – a foreigner that has been based in Australia for a couple of years. So does Who Shot Thebarman and Humidor.

Are all three now locals or ar they still foreigners? Ambitious and Tosen Basil are immigrants who will call Australia home now they are based here. Are they now locals or still classed as Japanese raiders?

There have been calls for quotas to be introduced – as far back as the early 1990s the late. great Bart Cummings was sounding the alarm about foreign domination –  or (this one is perhaps the most sensible) the introduction of more ''win and you are in'' qualifying races in Australia.

The Melbourne Racing Club currently grants the Mornington Cup winner a start in the next Caulfield Cup. Kings Will Dream, the current favourite, is thus guaranteed a run at The Heath but could battle to make the Melbourne Cup field – unless he wins at Caulfield. The same goes for the winner of the Naturalism Stakes (known as the Foundation Cup), which will be run later this spring.

For the Melbourne Cup there are four exempt races: the Lexus, the Cox Plate, Caulfield Cup and the Bart Cummings, run at Flemington in early October.

That may be the simplest solution – unless the foreigners start turning up years early to run in those. But would they then be locals?