Ireland have given themselves an outside chance of winning their debut Test match after Kevin O'Brien's unbeaten century helped open up a 139-run lead over Pakistan heading into the final day in Dublin.

Hours earlier on day four, the Irish faced the prospect of an innings defeat but they lost only three wickets in the final two sessions to reach stumps at 7-319 in their second innings after following on. 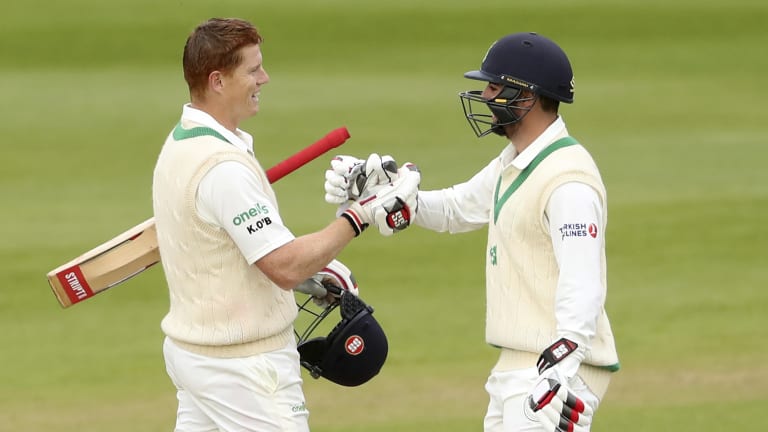 Even a draw would be a marvellous achievement for a country that was awarded Test status only last June.

O'Brien became the first player to score a Test century for Ireland and he was there at the close on 118 not out, with his 114-run partnership with Stuart Thompson (53) for the seventh wicket proving decisive.

Tyrone Kane was with O'Brien on eight not out at the close.

Mohammed Amir shrugged off a nagging knee problem to be the pick of the bowlers, finishing the day with figures of 3-57 as he reached 100 Test wickets.

Resuming their second innings on 0-64 after being asked to follow on and still needing 116 more runs to make Pakistan bat again, Ireland had slumped to 4-123 by lunch.

When Amir removed Gary Wilson (12), caught by Haris Sohail in the slips, and Paul Stirling (11) was trapped lbw by Mohammad Abbas, Pakistan looked to be set for a comfortable victory.

But O'Brien's circumspect batting – his 118 has come from 216 balls and contained 12 fours – has ensured Ireland stay alive at Malahide.