As another NFL London series comes and goes, replete with sellouts of engaged UK fans, the usual question remains. How about that London franchise?

It is one that has been asked of many NFL executives who have been on the ground for these games since 2007, with the league and its component shareholders debating about whether that comes through the expansion route of the relocation of one of its 32 existing teams. Those charged with facilitating the game in the UK and Europe make up a division now headed by former World Rugby CEO Brett Gosper, the roots embedded 14 years ago – and those roots are now starting to bear fruit.

The onus was on cultivating market conditions, and it is hard to see how things could have gone any better. One of the bigger stumbling blocks – stadium availability – has been overcome with the emergence of the Tottenham Hotspur Stadium following complications around Wembley. Media interest is high, as evidenced by how busy Gosper has been with interviews since taking his position at the turn of the year.

Most important of all has been the fanbase. Off the back of two packed houses in north London for the Atlanta Falcons’ win over the New York Jets and Jacksonville Jaguars’ last-gasp victory against the Miami Dolphins, the appetite for the NFL in the capital remains great. Similar scenes are expected when Germany plays host in 2022.

For Gosper, however, there is a different question to ask of him and his team. “Have we sold our proposition as strong as we could have?” He believes that with the infrastructure in place, and the will on tap – both from fans and those charged with making the game a success on this side of the Atlantic – the onus is on showing the league just how ready London is to feature more prominently on the regular-season schedule.

“I think we have to examine that and see if we’ve made the case,” he says. “Not for any owner in particular but just generally make the economic case rather than sit back and think it’s an obvious thing. Maybe we need to do a little bit of work on that and, should owners find that attractive, we can pursue that with a little bit more interest. That’s the work that needs a little bit more attention.”

Those sentiments are echoed by the NFL’s director of public affairs (Europe), David Tossell: “We’ve never created a manifesto to put in front of owners to say we think you should move here. We’ve much more left it to them to make their own decision. But maybe that is something at some point we sit down and think about, whether we should be doing that.” 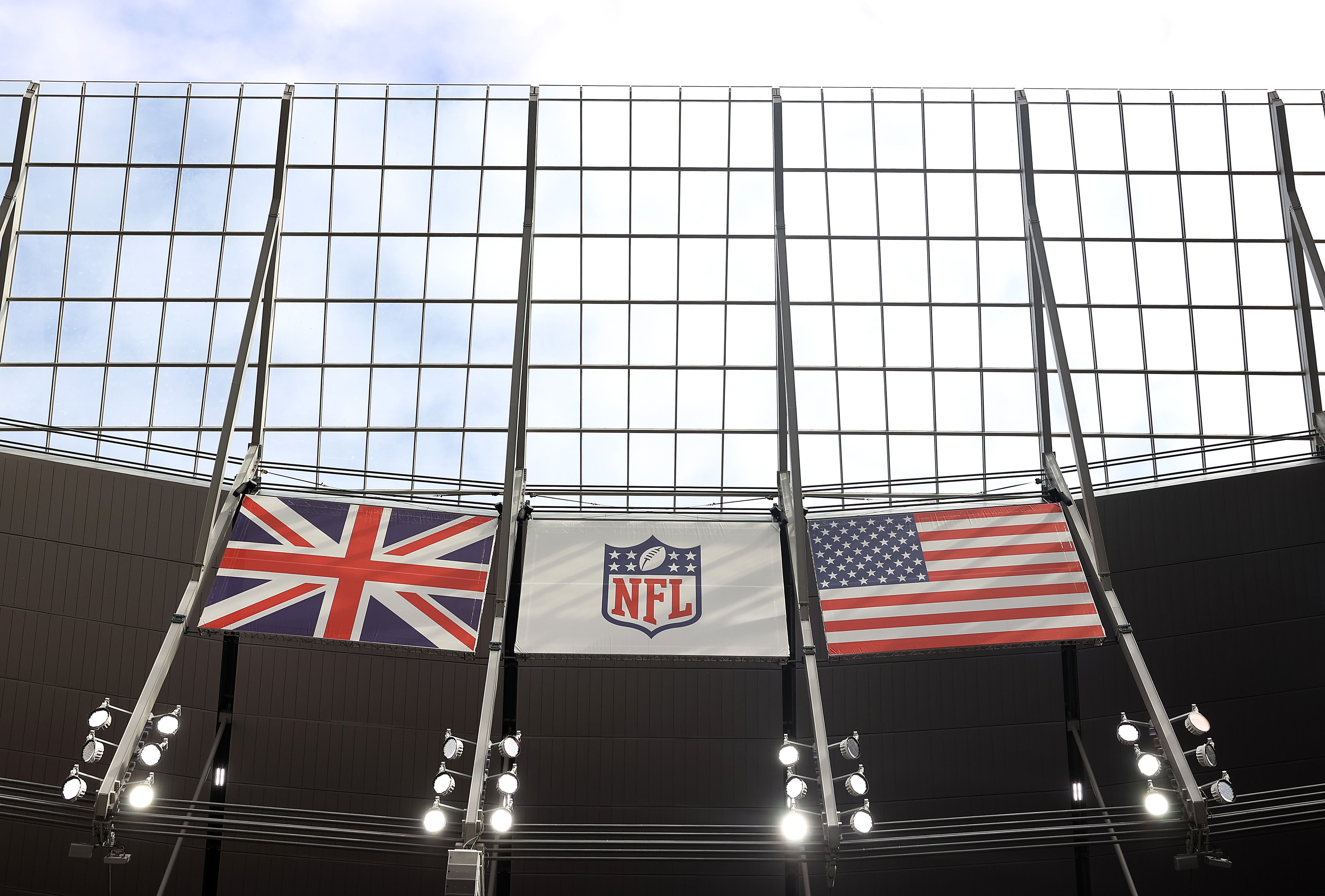 The general readiness was exemplified by the two recent games, and the activities around them, ranging from the international combine and community programmes held between both fixtures. Still in the midst of the pandemic, there was uncertainty to how well all could be attended, meaning execution was left as late as possible to avoid any gross losses. Even with a smaller window, all were pulled off with aplomb.

Of course, these little things are probably not deciding factors. What will be is the new legislation mooted for 2022, which will drastically change how individual franchises view the rest of the world.

The NFL are currently working on changing the commercialisation restrictions placed on teams, whereby they can only market their rights individually within a 75-mile radius of their stadium. Should plans be ratified, next year teams can choose core markets to expand into, whether Europe, the rest of the world, even simply neighbouring countries Canada and Mexico. Gosper tells The Independent demand from organisations “seems excitingly high”.

“Because it’s coming from the clubs, it’ll be more opportunity to engage fans more deeply, because fans, when they have a team to follow, know back story, know players. Club involvement will be more meaningful than the NFL involvement from a broader league perspective.”

The knock-on effect could mean more partisan support overseas. The London games still have a degree of novelty. Stands contain every kind of shirt beyond the two out there making plays. And while signage and announcements do their best to recreate a home atmosphere, there is a sense of “exhibition” to the occasions, even if they do actually matter to league placings. Matthew Wright’s field goal for the Jaguars on Sunday, for instance, broke a 20-game losing streak.

It would be wrong to say the NFL are wary of it, but it is something they have thought about. “You’ve got to either increase the number of games ad hoc”, which Gosper feels is doable as more teams become interested in testing the London waters. Or, he feels, that comes with a more meaningful presence with a team. “Definitely both would be good. You could argue both sides of that coin.” 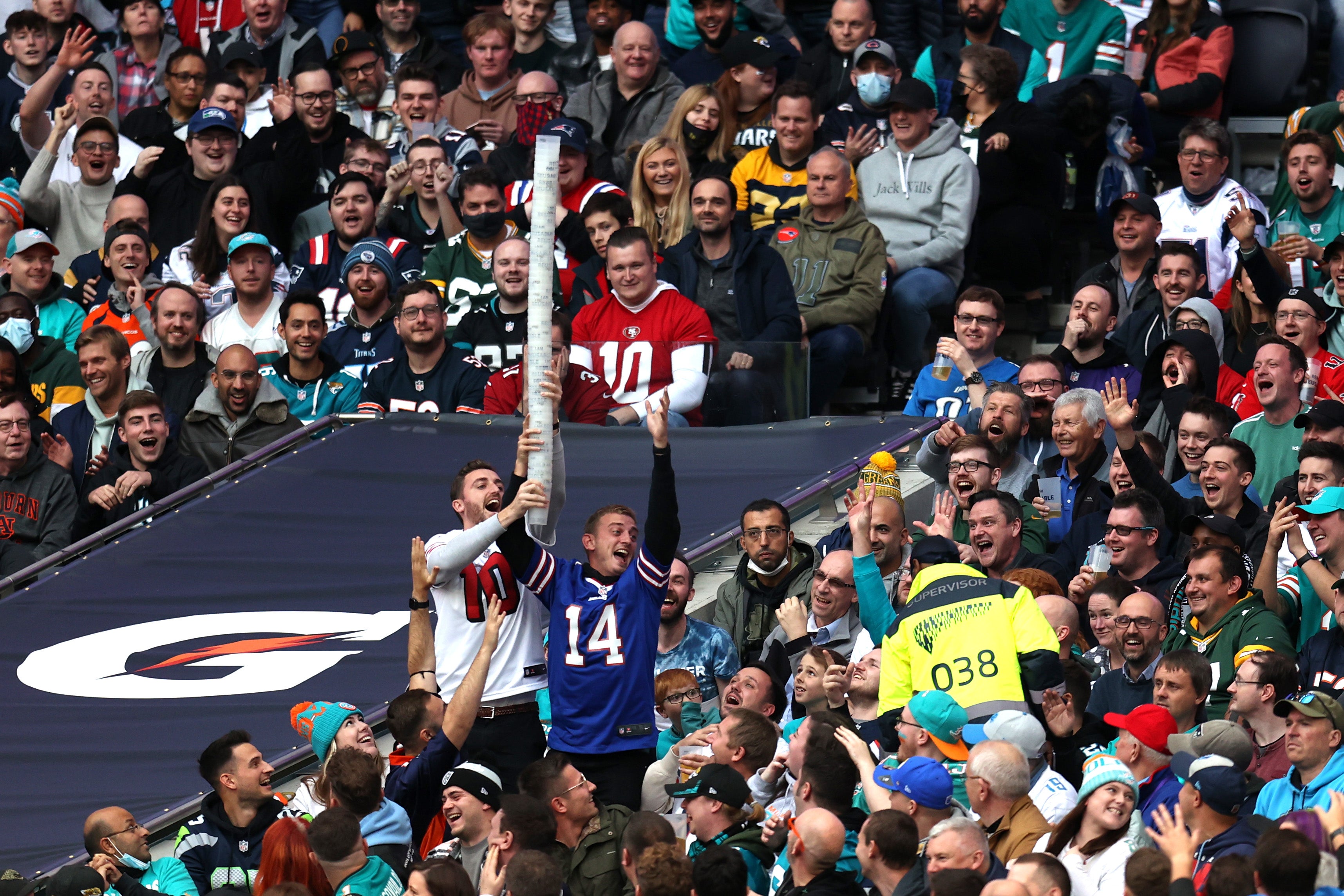 Fans at the 2021 NFL London series

There is little reason to go against the status quo right now. Broadcast and fan numbers for the London games continue to grow. And, all told, the NFL continues to be an indomitable beast globally and, most importantly of all, in the United States.

Even in 2020, with the challenges of the coronavirus pandemic and a presidential election that traditionally impinges on NFL ratings, there was only a seven per cent decrease. The league averaged 15.6 million regular-season viewers last season, even with games played out in front of empty stadiums. Of the last year’s 25 top telecasts, the NFL had 20 of them, even continuing their usual trick of eating into the NBA’s audience.

Gosper certainly feels no imminent pressure to deliver. The comfort of the NFL is carried at his level, too. “The sharp focus on the commerciality side, less politics, less fragmentation, greater alignment of the sport overall”, are plusses he relays compared to what he found in rugby.

“It’s a spectacular sport, and we or they all talk about it being at the intersection of sport and entertainment. I think that bears out with any of the research that we do. It’s a spectacular sport but a spectacular event. What we produced in London over the past few weeks, they’re a variation on the Super Bowl. A lot of the players talk that way when they talk post-game. There was a lot going on in those games and a lot more going on in these games than, say, a rugby World Cup final – where most of it happens, from a purist point of view, in the game itself.

“Maybe the NFL was like that back in the day,” he jokes. “They obviously had some pretty visionary people back in the day to unify common interests and make sure we’re arguing how the whole gets better, not zero sum games.”

Therein lies, perhaps, the biggest obstacle to a London franchise. Beyond the logistics around travel and especially tax laws, the NFL is a rare beast. At the vanguard of sports entertainment, serving up hearty scoops of both to keep the purists and casuals transfixed on its every snap.

Nevertheless, Gosper, who oversaw two successful World Cups during his near 10 years with World Rugby, is not resting on his or the NFL’s laurels.

“If we are sitting here with no growth or going backwards, or we’ve really hit the wall with the current model, we might be actioning what you are talking about: creating more energy behind that possibility.

“For now, it just might be good to weigh up some of the benefits [of a London franchise], look at some of the obstacles. Provide a little bit of clarity on that to owners in general and explore it perhaps a bit more aggressively.”