Anthony Beauvillier also scored for the Islanders, the Metropolitan Division leaders, won for the fourth time in five games and ninth in 12 (9-1-2). The Islanders, who beat Colorado, 4-3, in overtime Saturday, improved to 15-2-1 in back-to-back games, including 9-0-0 on the back end.

Mikael Granlund scored for the Wild, who lost for the fifth time in six games (1-3-2). Devan Dubnyk, starting for the second straight game after facing just 18 shots in a 4-2 win at the Devils on Saturday, had 32 saves.

Minnesota pressed for the tying goal in the third, outshooting the Islanders by 12-9 in the period after totaling 15 shots over the first 40 minutes. Greiss had four saves in close on one Wild power play in the middle of the period, stopping a tip by Eric Staal, a shot by Jason Zucker and two more tries by Staal.

Greiss improved to 4-0-1 in his last five games, giving up three goals on 157 shots in the stretch. His lone loss was 1-0 in a shootout against Tampa Bay at Nassau Coliseum on Feb. 1.

Granlund tied the score, 1-1, with a power-play goal 38 seconds into the second period. A rebound of Staal’s shot came out to Jason Zucker on the right side, and as Greiss came out to cut off his angle, Zucker sent the puck across to the left where Granlund put it into the open net for his 13th.

Toews put the Islanders back in front at 2 minutes 1 second on a power play with his fourth goal, a one-timer from the left slot off a pass from Ryan Pulock.

Beauvillier gave the Islanders a 1-0 lead with a little less than minutes left in the first period with his 13th of the season and first in 12 games. Valtteri Filppula brought the puck up the right side and passed to Beauvillier, who was streaking up the middle alone, and he beat Dubnyk on the right side.

Filppula had a chance to double the lead on a three-on-two break with a little more than a minute left in the first, but his attempt in front hit Dubnyk, who covered the puck as he fell back on the ice. He appeared unaware that the puck was under him. 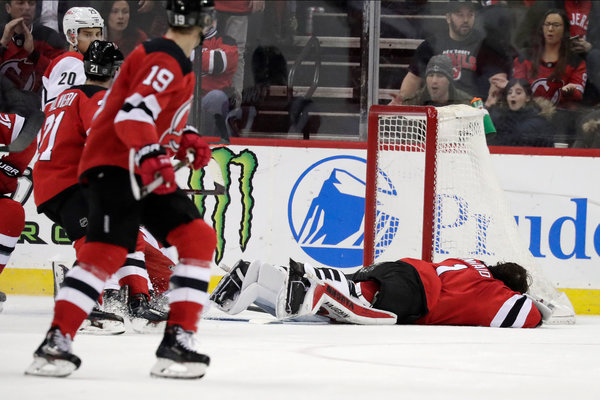 DEVILS 3, HURRICANES 2 Marcus Johansson scored twice and a battered Keith Kinkaid made 32 saves to lead the Devils past Carolina at Prudential Center.

Nico Hischier set up all three goals to help the Devils snap the Hurricanes’ three-game winning streak and hand them their fifth loss (13-5-1) in 19 games. Pavel Zacha also scored for the Devils.

Dougie Hamilton and Teuvo Teravainen scored for Carolina, and Petr Mrazek made 18 saves. The Hurricanes, who have missed the playoffs the last nine seasons, would have moved into the second wild-card spot ahead of idle Pittsburgh with a win.

This was a tough game for Kinkaid in more ways than stopping shots. He took a stick in the face from Jordan Martinook with 7:23 left in the second period, was bowled over by Justin Williams later in the period and was knocked over again in the third when Nino Niederreiter interfered with Devils defenseman Damon Severson.

Not only was Niederreiter penalized, the call nullified what would have been a tying goal by Sebastian Aho with 12:54 left.

Zacha and Johansson gave the Devils a 2-0 first-period lead.

Hamilton cut the gap to 2-1 in the second, but Johansson restored the two-goal margin at 15:56 of the third period. Teravainen scored on a power-play with 1:27 to play after Carolina pulled Mrazek.

The Ducks announced that General Manager Bob Murray would be the coach for the remainder of the season.

“Difficult decisions need to be made when times are tough, and our play has clearly been unacceptable,” Murray said in a statement.

Anaheim has made the playoffs six straight seasons but won just two of its last 21 games. The Ducks were second in the Pacific Division on Dec. 18 after winning 11 of 13, but they have gone 2-15-4 since, including a 12-game skid last month.

“You don’t expect to have to live through this stuff for an extended period of time,” Carlyle said after a 6-2 loss at Philadelphia on Saturday.