UNIONDALE, N.Y. — The Islanders and their fierce checking have kept the Penguins’ high-scoring captain, Sidney Crosby, muzzled for the first two games of their N.H.L. first-round series. Not coincidentally, the Islanders lead, two games to none, as the best-of-seven series shifts to Pittsburgh.

Crosby, a three-time Stanley Cup winner who scored at least 100 points this season for the sixth time in his 14-year career, has more regular-season points against the Islanders (113) than against any other opponent. But he has come up empty so far in these playoffs to the delight of the Islanders’ howling crowd at Nassau Coliseum, which derided Crosby often with loud chants of his name.

Crosby, like many of his Penguins teammates, has been flummoxed by the Islanders, especially on Friday night in Game 2. The Islanders won, 3-1, by scoring twice in the third period before the visitors trudged off to contemplate their fate.

The only goal on Friday by Pittsburgh’s vaunted offense, which also features the high-scoring forwards Evgeni Malkin, Phil Kessel and Jake Guentzel, was by defenseman Erik Gudbranson on an assist from Malkin. Kessel, Malkin and defenseman Justin Schultz scored in Game 1 on Wednesday night, when the Islanders won, 4-3, in overtime.

The Islanders had not won the first two games of a playoff series since they swept Wayne Gretzky and the Edmonton Oilers in the 1983 Stanley Cup finals.

“We’re just playing hard; that’s our goal out there,” said Islanders center Casey Cizikas, whose checking line, which included Matt Martin and Cal Clutterbuck, was often matched against Crosby. “We’re playing smart and trying to be physical when we can.”

The game plan is working well: The Islanders held Crosby to one shot in Game 2 after he had two shots on goaltender Robin Lehner in Game 1.

Pittsburgh has not had to deal with a 2-0 series deficit since the 2013 Eastern Conference finals against the Boston Bruins. But Crosby was measured and composed as he voiced confidence going into the games in Pittsburgh: Game 3 on Sunday afternoon and Game 4 on Tuesday night.

“We generated good chances,” he said. “We just have to make sure we do a good job with the ones we get. We had opportunities similar to the last game. We didn’t get the lead, and they hung around.”

The Penguins fired 44 shots at Lehner in Game 1 and another 33 in Game 2. Lehner, whose comeback season has been a prominent theme for the Islanders, said his team’s focus and work ethic were to credit for stifling the Penguins’ gifted offense. 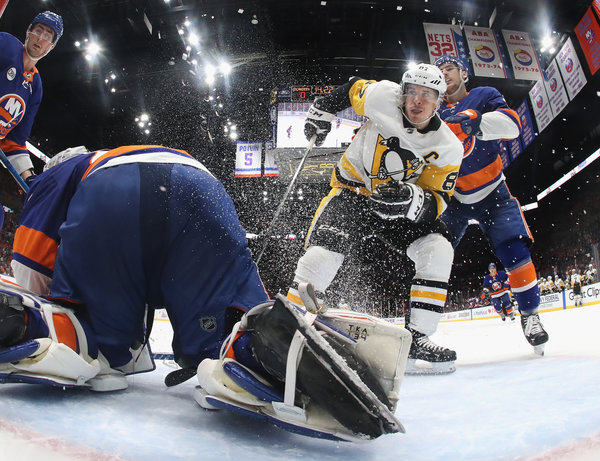 “We didn’t feel nervous,” Lehner said. “We trusted that if we stuck to our game, we were going to come out with the win.”

Penguins Coach Mike Sullivan, who has a 9-1 playoff series record since becoming Pittsburgh’s coach during the 2015-16 season, said he envisioned Crosby and his linemate Guentzel, who led the Penguins with 40 goals, returning to form as the series progresses.

“I’m not disappointed in those guys,” Sullivan said. “They are too good. They are too important for our team. I know how hard they compete, and I know how much they care.”

But the Islanders will be there to thwart them as they try to avenge a loss to the Penguins in the opening round of the playoffs in 2013. The impact of Coach Barry Trotz continued to be evident in the their steady and panic-free play.

A tie game into the third period against the playoff-tested Penguins, who won Stanley Cups in 2016 and 2017, would rattle many opponents, but the Islanders did not crack as Game 2 seemed headed to overtime.

Goals by Jordan Eberle and Josh Bailey provided the margin of victory, and Crosby and Co. could not muster much in the closing minutes against Lehner, whose only two playoff victories in his nine-year career have come in the past week.

“It’s a credit to our defense corps, how well they are playing,” center Anders Lee, the team captain, said. “Our team as a whole is doing our best. We have all bought in together.”

Now the Islanders will be confronted by Pittsburgh’s roaring crowd at PPG Paints Arena, a rink where Crosby has played postseason games every year except for his rookie campaign.

He has 66 goals and 185 points in 162 playoff games, so it is unlikely that two subpar games will be an issue. A 31-year-old center, Crosby said the heightened pressure to win could produce better results.

“The urgency becomes higher — that should bring out the best in us,” said Crosby, who had 23 goals and 44 assists combined in the three previous postseasons. “It’s just tight right now, close checking. That’s the way this series is going. They did a good job at home. We have to go home and do the same thing.”

Sullivan agreed with his franchise player and saw no reason to fret about Crosby’s two-game production drought. The coach made sure to emphasize to his team just how much hockey remained to be played.

“The message I said to the players after the game is that it’s the first to win four games, not two,” Sullivan said. “We have to go back home, control what we can and win one game. Then we’ll go from there.”